Abolishing Capital Punishment: What is “Justice”? 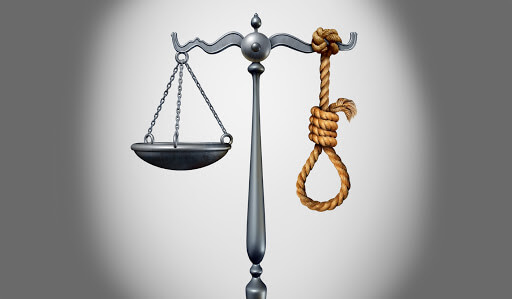 On July 22, the Biden Administration withdrew requests made by the Trump administration to seek the death penalty in 7 cases, highlighting an overall sentiment of moving away from capital punishment at the federal level. While Democratic Americans are typically against the death penalty, many Republicans still remain in support of the practice. A topic that has been consistently subject to debate, it calls into question what justice really is, and how justice can be properly served in court and criminal cases. Although the death penalty can be seen as a fair and justifiable outcome for the most heinous of crimes, it does not always serve justice the way it is intended to do.

Support for the death penalty comes with the idea that it is a justified outcome for bloodcurdling crimes. Arguments in favor of the death penalty include retribution, deterrence, prevention of re-offending, and closure for families (BBC). The idea behind retribution is that guilty people deserve to be punished, proportional to the severity of the crime they committed. A sentiment supported by the argument “an eye for an eye,” many believe that it is morally justifiable to execute those who have taken lives. According to Pew Research Center, 60% of Americans favor the death penalty in cases of murder. Within this percentage, 27% of people strongly support it. 64% of the general public believe the death penalty is morally justifiable in cases of murder, including an overwhelming 90% of death penalty supporters. Indeed, the death penalty can be seen as a fair outcome for a murderer. Another possible positive benefit of keeping the death penalty is that it may deter would-be murderers from killing innocent people. This is a substantially weaker argument due to the fact that the effects of this cannot clearly be measured. However, John McAdams, who is from the Department of Political Science at Marquette University, states that whether or not there is a deterrent effect, it is better to keep the death penalty. His reasoning is that failing to execute murderers essentially allows the killing of innocent victims. In the same way, executing murderers prevents them from possibly committing the same crime again. On the more emotional side, some argue that executing a murderer provides closure to the victims’ families. While some families may find peace in knowing that the person who has taken the life of their loved one will no longer get a chance at life, the argument as a whole is flimsy as different people handle loss and grief in different ways. Overall, supporting arguments for capital punishment focus on justice for the victim and fair punishment for the criminal.

However, the justice system is never a simple and two-sided yes or no situation. While the death penalty may be seen as a justifiable punishment for crime, it takes up lots of resources and can lead to unfair sentencing and the execution of innocent people. For one, death penalty trials are expensive. According to MoveOn, $137 million dollars is are spent on death penalty trials in California alone, but no one has been executed in 3.5 years. If the death penalty was abolished, this money could go toward other arguably more important things, such as better rehabilitation resources for prison inmates to prevent them from committing the same crimes that landed them in prison. However, the most compelling argument for the abolition of the death penalty is the statistics behind the groups of people executed. By looking at this data, it is obvious that court sentences for death row inmates are racially motivated. An article from TIME states that according to the Death Penalty Information Center, between 1900 and 1977, Virginia executed 73 Black defendants for accusations of rape, attempted rape, or armed robbery that did not result in death, while no white defendants were executed for the same crimes. To add onto this, a study conducted by the University of North Carolina and the Georgetown Law Center in 2015 concluded that race was the “single most reliable predictor of whether a defendant in the USA will be executed.” If a defendant’s victim is white, they are much more likely to be executed than if their victim was Black. Data from Amnesty supports this, as their research highlights that of 500 people executed between 1977 and 1998, 81% of them were convicted of murdering a white person, despite Black and white people being victims of homicide in equal numbers. Some may argue that although there are racial motivations in who gets the death penalty, murderers still get executed so the death penalty is justified. However, there are also countless cases in which innocent people are sentenced to death and/or executed. One such case is the sentencing of Texas inmate Duane Buck, who was sentenced to death due to a racist psychologist’s remark that Buck’s race as a Black person made him inherently more dangerous (MotherJones). Although his sentence was later changed to life in prison, the incident highlights the systemic racism in our justice system. The death penalty is not the solution to crime; it is costly and almost never truly fair.

By analyzing both arguments, it is evident that the death penalty should not continue to stay in practice. Despite it being a fair outcome for those who take the lives of innocent humans, the cost of the practice, likelihood of error, and injustice within our court systems leaves much room for inaccuracy in sentencing. While prison sentences can be changed, death cannot. Death is an everlasting outcome that is irreversible. On the surface, capital punishment seems like the ultimate form of justice; dig deeper and one will find out that it almost never serves justice the way it should.