Boom or Bust: The Austrian Theory of the Business Cycle 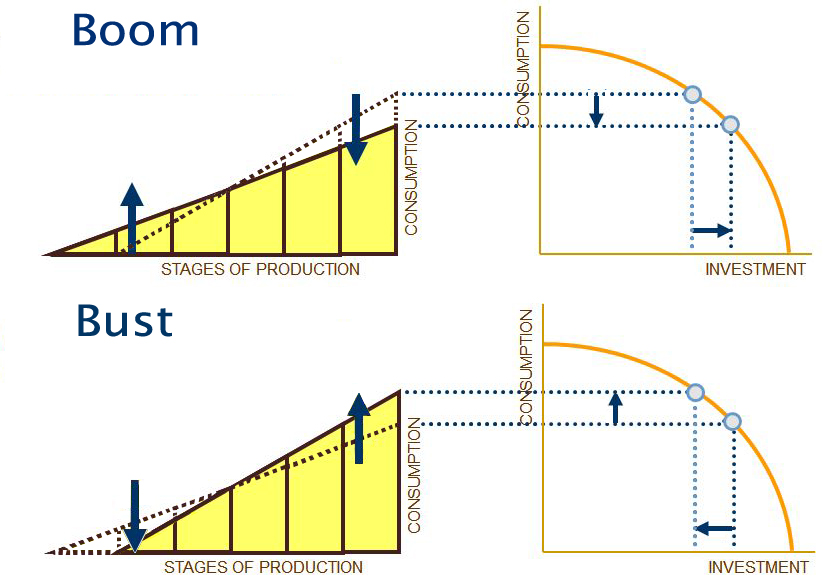 Before delving into the ABCT, it is important to consider the Austrian school’s line of reasoning when analyzing the business cycle. Three foundational macroeconomic concepts are underlying the ABCT: the production possibilities frontier (PPF), the loanable funds market (LFM), and the Hayekian Triangle. To contextualize, I will briefly explain each.

The PPF is a representation of a market’s output consisting of various combinations of goods or services. To analyze the business cycle, consumption lies on the y-axis and investment on the x-axis. Thus, at higher levels of consumption, there is reduced investment, and vice-versa.

When synthesized, all three concepts are closely related. For example, lower interest rates in the LFM incentivize investment and less consumption in the PPF. Additionally, fewer consumption goods are produced in the Hayekian Triangle in favor of resource allocation to early and intermediate stages of production.

As a final note, before covering the ABCT, interest rates are essential when conducting any economic calculation. Interest rates are indicative of consumers’ time preferences. When interest rates are low, absent any manipulation of the rate itself, consumers are choosing to save (foregoing immediate consumption for future consumption/saving) instead of consuming, which increases the supply of loanable funds. Vice versa, if consumers wish to satisfy immediate wants, then there is increased consumption. This leads to a decrease in investment and the supply of loanable funds, increasing the natural rate of interest.

According to the ABCT, the business cycle begins once there is an artificial credit expansion in the LFM—mostly due to a loose monetary policy of the central bank. The expansion of artificial credit in the LFM creates a lower nominal interest rate compared to the natural rate. The problem is that the increase in the supply of loanable funds is an increase of artificial credit/new money, not the real savings of consumers. As a result, the distortion of the natural interest rate misleads producers and investors to believe that there is an increase in real savings, causing them to increase investment in the early and intermediate stages of production (see the Hayekian Triangle). As investment and production increases, consumption increases as well, since it is also driven by lower nominal interest rates. With consumption and investment increasing simultaneously, there is increased malinvestment, but it is not actualized until the central bank contracts the money supply to avoid damaging inflation. To Austrian economists, the extensive period of malinvestment is often confused with a booming economy. Once the nominal interest rate increases because there is no longer any more artificial credit released into the LFM, producers, and investors realize their malinvestments and consequently liquidate assets, lay off workers, or even shut down businesses.

Consider an analogy of a restaurant owner—we will call the owner Ludwig—and a circus that comes to town. A circus enters town and all the staff of the circus decide to dine regularly at Ludwig’s restaurant. The circus intends to stay in town for a few weeks, and Ludwig sees a significant increase in sales and popularity during this time. As a result, Ludwig decides to expand the size of his restaurant, hire more employees, and build additional locations—amidst the frenzy of the circus—to account for the increase in business (his investments are the so-called expansionary period of the economy). In the short-run, Ludwig’s investment seems to be the right decision to accommodate his many new customers. However, Ludwig’s fatal error is assuming that the increased business the circus has brought to his restaurant is permanent. The circus leaves town, and all of a sudden, Ludwig has multiple employees and empty restaurants serving not nearly the amount he once served. Subsequently, Ludwig is forced to shut down locations, lay off workers, and possibly file for bankruptcy. The circus leaving town is the contraction of the money supply and the realization of malinvestment, thus inducing a recession.

For more information on the ABCT, feel free to read this article from the Foundation for Economic Education titled, “How the Housing Crisis Vindicated the Austrian School of Economics.”