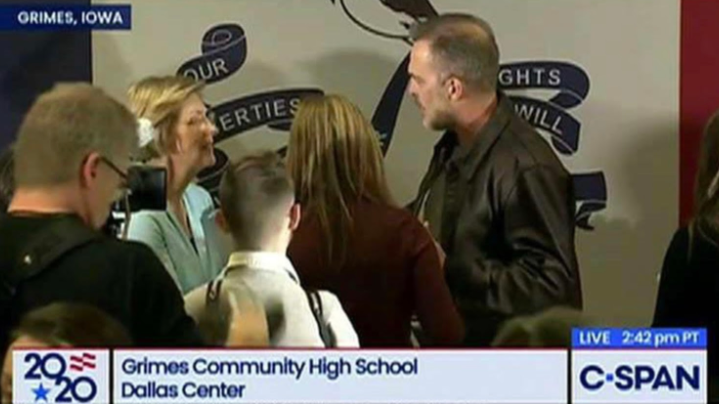 Father: “I just want to ask one question. My daughter’s getting out of school, I saved all my money, she doesn’t have any student loans.”

Father: “Am I going to get my money back?”

Warren: “Of course not.”

Father: “So you’re going to pay for people who didn’t save any money, and those of us who did the right thing get screwed?”

Father: “Of course it is, when my buddy had fun, got a car, went on vacation, I saved my money. He made more than I did. I worked a double shift. I worked extra. So you’re laughing at it. That’s exactly what you’re doing. We did the right thing, and we get screwed.”

Warren's plan calls for eliminating student loan debt of up to $50,000 for households making under $100,000 annually, which would apply to around 95% of borrowers.

She said she would finance her $2 trillion dollar proposal with a wealth tax.

When asked about the moment on "CBS This Morning," Warren responded.

"Look, we build a future going forward by making it better… By that same logic what would we have done? Not start social security because we didn't start it last month for you?"

She then went on to say:

"Back when I was growing up, my family didn't have any money to send me to college, but there was a $50, a semester opportunity out there… So kids didn't have to go into debt. A part time job would get you through; that world is gone, and we need to open it back up again."

For one, the only time I hear Democratic politicians say “God bless you” is when they want to justify taking money from the middle class to give to the poor. It is like me stealing your car and saying, “Thank you.”

Secondly, she argues the middle class will not have to pay for it, but there is a reason why nine of the 12 European nations that had implemented a wealth tax quickly did away with it. That is because unless you also increase import tariffs then you are basically encouraging the wealthy to move their money and businesses overseas. For example, France's wealth tax led to an exodus of roughly 42,000 millionaires until Emmanuel Macron ended the tax.

Thirdly, a president must prioritize!

In the last 70 years a president has only been able to pass a few major pieces of legislation over the course of their presidency. Does Warren really want to use a large chunk of her political capital on such a divisive solution? Also, do Americans really want to pay $2 trillion to forgive student loans when that money could be better spent elsewhere, such as on our infrastructure or paying off our own national debt, which cannot be so easily forgiven and which every year faces even more interest.

Lastly, her personal anecdote is revealing because in the United States, university used to be much cheaper. College got more expensive when the government got more involved. This is because as soon as the government made it easier for students to borrow more money, it became easier for universities to charge more money.

Why not go back to the way things were?

For those of you who got screwed by our current system, I empathize with you.

You were overcharged, and it is unfair for you to have to pay large chunks of your income for decades on end. It is also bad for the American economy when so much money is tied up in paying off loans instead of being spent or invested in American businesses.

So, all Americans should that something needs to be done;  here are some sensible solutions:

The government should pay off $10,000 worth of debt for all students no matter what you or your parents make. That is a more modest and fair amount.

The government should work with banks to restructure loans in order to reduce student debt by an additional five to 15 percent.

Loans should be extended further into the future, so each month you can pay less money out of pocket. Over time, rising inflation will also help you pay less in true value.

Interest rates should be reduced or possibly be eliminated altogether.

Monthly payment size should be tied to a percent of your income instead of demanding a set amount.

These solutions are common sense, and since they are less partisan, they are much more likely to get done.

Everyone can walk away from this compromise feeling like it is fair instead of feeling shafted for doing the right thing.