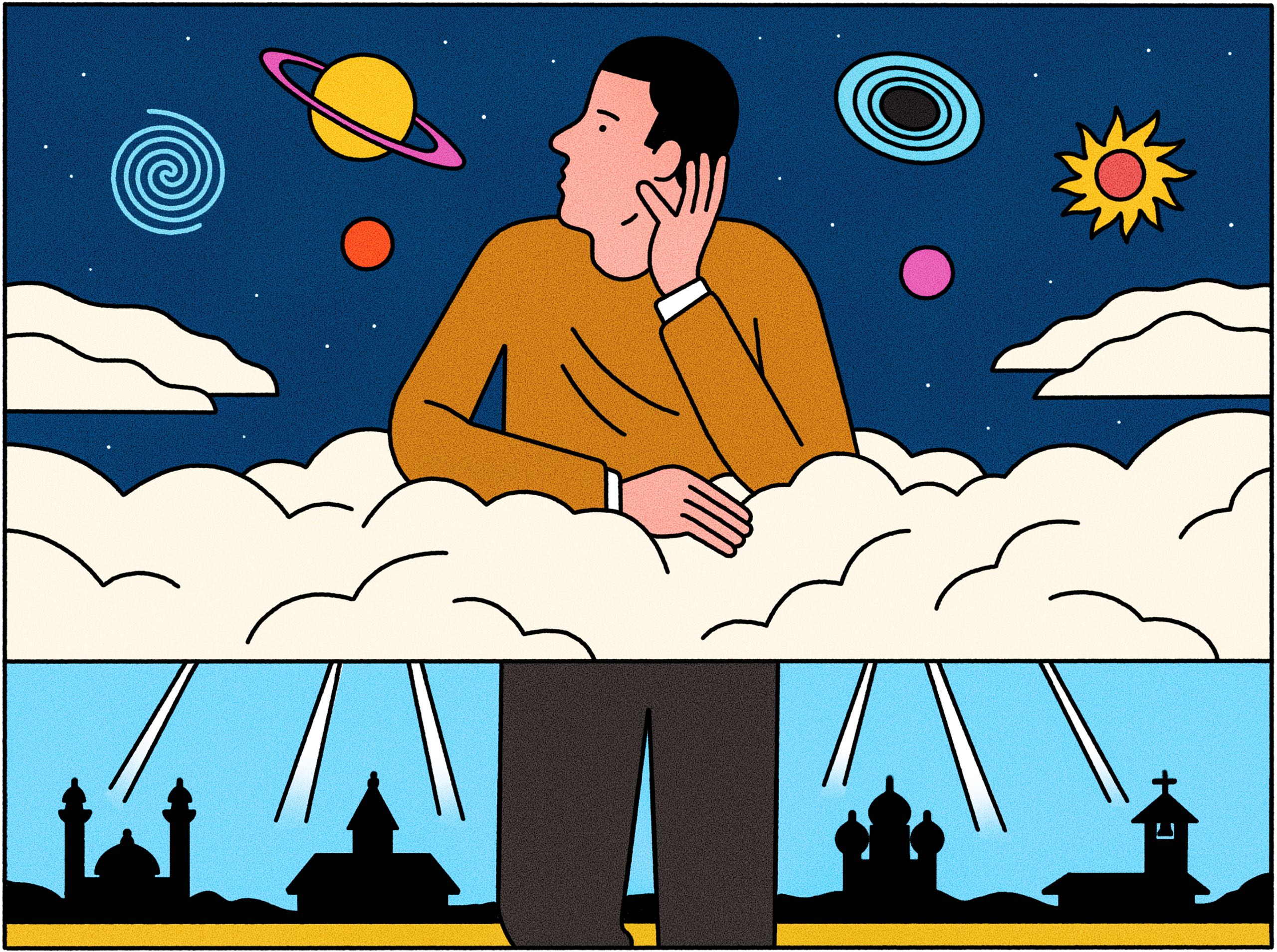 It is like being in a cave with an aggressive creature hovering over you with no compacity for a reason. They want you to sacrifice the only thing you need for your life –your mind. They demand you give it up, they demand you to no longer think, and your plea for independence is lost because this brute is a window–all being said passes through into an abyss, and nothing is absorbed for consideration. They want what they want and nothing other.

This is precisely the current culture of atheism. Atheism is still regarded as a taboo regardless of the ongoing increase of atheists in the United States. I have experienced people who have minds and destroy its own purpose when met with an atheist: reason. I would deliberately ignore these conversations for just that, but now I enjoy speaking about it to reinforce my position: the mind is antithetical to faith –which has been shown time after time.

I have always been abnormally inquisitive in something as a kid. It started as being an excellent writer in elementary school. “Hey, are you done?” I would ask another student and would proceed to brag about finishing the writing assessment first after they would answer, “no.” I enjoyed writing too much, obviously. Later it was science; I inquired in the methods of thinking and discovery –the fact that our minds are our essential tool of discovery was a remarkably interesting fact to me, even though I did not grasp it fully at the time. Later it was astronomy, religion, and evolution. As you can see, this is one of my first major phases. The theme is where are we? And how did we get here? “There is no God,” I told my friend in 6th grade as my conclusion. He offered church as an alternative. I considered it. I never went. I was a neo-atheist, following the footsteps of Richard Dawkins and Stephen Hawking. Concealing my atheism while chewing the idea that there is no God was always problematic. There were questions I did not have answers to, and no one around to answer them. If I spoke out, I would be questioned on my legitimacy of my faith in God. “Atheists are a-moral,” “they are sad people,”  “they will fail in life,” my family would confess. Well, if that is true, then why am I exempt? Surely, I had some sense of good and bad. I was often chipper and overly ambitious in my private research.

I indulged myself in to online communities surrounding the topic of God for about two years. I would have genuine conversations, or debates, or give them hell when I felt like it. Often after genuine conversations, I had had a strong emotional appeal to Christianity. I would pray to see if I could muster a connection with God. None was apparent. I was in a continuous loop of considering religion and denouncing it as if I were in some convection cycle. The atheism in me eventually won. I made a final decision, and left all social media related to the topic. I stopped reading on astronomy,religion, and evolution –I just maintained my interest in NASA.

Atheism was no longer a part of my personality. It was just an aspect of me that was rarely brought up, like my politics (at the time). I never fully integrated the implications of the non-existence of God, and still had cognitive infighting on reality-based premises and mystical premises which came from religion. These would often spur from conversations with my parents. They would imply the existence of God, and my mind would retort, “but there isn’t one.” I never felt comfortable around my parents about the topic. After all, I was only 13.

But my atheism had a revival in me. During sophomore year, I tasted the importance of politics, philosophy, and ideas as such. I started observing the consequences of bad philosophical premises in history and our ongoing cultural trend. This influenced me to speak out on social media on a variety of issues. Now, as to what would speak about is irrelevant, the essential here is how religious topics became a part of my life again. It was often that I would participate in debates where my opponent would blindly justify their position on religious morality and the existence of God –they could not warrant either. I dedicated a generous portion of my time diving into the source of these arguments and solidified my atheism along the way after finding out how ridiculous the epistemology of non-secular arguments is. “What exactly is a God?” I would ask. “They keep telling you what it is not, but never tell you what it is.” (Rand, 1961, For the New Intellectual).

I continued to integrate myself on social media, I started to develop a popular persona which led to a paid trip of my mother and me to Austin Texas. It was a conference center and a hotel separated by a beautiful courtyard of fountains and gardening. I was surrounded by people I felt like I knew without shaking their hands; we all had the same core beliefs –one of them being atheism. The social environment was the removal of something behemoth on my shoulders; there was no weight, no-sag –just pure confidence. I was the skyscraper in the surrounding area, and sure as hell felt like it. I walked around often just to actualize my achievements; I was often mentioned in public discourse, met fans of my content, and enjoyed the sensation that elders were admirers of my work. But there was one thing keeping me from having full comfort: my mother’s presence.

I wanted to hide the philosophy from my mother as much as possible because I knew how she would react unthinkingly. There was an instance that I could not avoid.My mother and I –alongside with a multitude of my adherents attended a dinner.My mother maintained her silence during the conversation I had about various subjects including physics and consciousness. The dinner was served in rounds generously sized plates. But this wasn’t no ordinary dinner –this was a dinner dedicated to one of my favorite philosophers: Leonard Peikoff. There was an exclusive broadcast of him on three different screens. The broadcast prevented me from realizing the waiters were asking me what type of coffee I wanted. “Regular.” I answered startingly; then, my eyes gravitated back to the screen. Peikoff proceeds to denounce religion and the existence of God. I kept my composure while my mom pulled out her phone to research the philosopher displayed on the screen. She oscillated her eyes from the screen and her phone to assure she was googling the right person. I knew exactly what she was doing; all I had to do from that point on was to prepare for the line of questioning that had soon come. She placed her phone down to suggest that the dinner was over, and she had heard enough.

Luckily, I entered the hotel with my friend Austin which was used as an external springboard to bounce out the conversation of religion with my mother. Austin entered with a pleasant greeting. My mother returned the same. “So, that guy on the screen was talking that he is an atheist; are you an atheist?” My mother asked concerningly. “I don’t want to talk about it,” I responded flatly. There was absolutely no facial expression written on my face to demonstrate the unimportance of the question. Austin projected a face of curiosity and confusion as to why I didn’t answer –he already knew my real answer. I later left without care, knowing my mom would want to further the conversation without the presence of Austin. “I can’t tell her. I just can’t.” I thought. There was just one memory that kept replaying in my mind. “The two things you could ever do to disappoint me is one: be gay, or two: be an atheist.” Said my dad months prior.

I returned to the hotel later that night, still having a mental defense up for questioning. I was right. My mother continued the conversation as if there were never a pause. I still evaded the question. “Well, you know, don’t tell your dad because you know how your dad is.” This gave me some relief because she implied that if she knew, it was not necessary for my dad to know anyway. I quickly scheduled a meeting with one of the other philosophers I knew. He was delighted to have the conversation of how I should break the topic to my parents, or even if I should at all over a cup of black coffee. The philosopher elaborated on his experience with his parents reacting to his atheism. He questioned my reasons for not wanting to make my position explicit and inquired about the possible consequences if I did tell my parents. After the conversation, I rose and left with clearer thinking and more confidence than before. It was truly a learning experience.

Finally, there was a sense of confidence surrounding the topic. Implicit in my thinking was my desire for parental acceptance for something I am not. Of what value is that to my life? That is an impossible question to answer since all values pertain to who you are –not just a reflection of what other people want you to be. I concluded that I would not tell my parents, but I will not hide it either. If the topic of God or religion occurred, I would give my take as well instead of letting them think that their beliefs are being integrated with mine. At the end of the day, if there is a bad emotional reaction from them because of my views, moral guilt is not mine to bear, but theirs for refusing to understand the position fully before making judgments. Why would anyone be ashamed if they believe their position is right? Being ashamed is the recognition that one has breached moral principles –I have not done such a thing. My parents must have the emotional burden of dealing with a son who is an atheist because of their irrational value judgments.

In short, no one should do self-evaluation of their own character based on the wants and desires of other people. The reason people do this is because they believe there is an existence of a social expectation to be a particular way. Because of this belief, people sacrifice their own minds to uninterested buyers; there is no social expectation, and if there were, they have no right to expect the sacrifice of others’ minds. Victims of this premise think and act only with the permission of others. The only standard of good is the wants of everyone else besides you. Now with this enlightenment, I have a new sense of understanding of how I should act toward my parents, and in public not for the sake of them, but out of respect for myself –the ego.