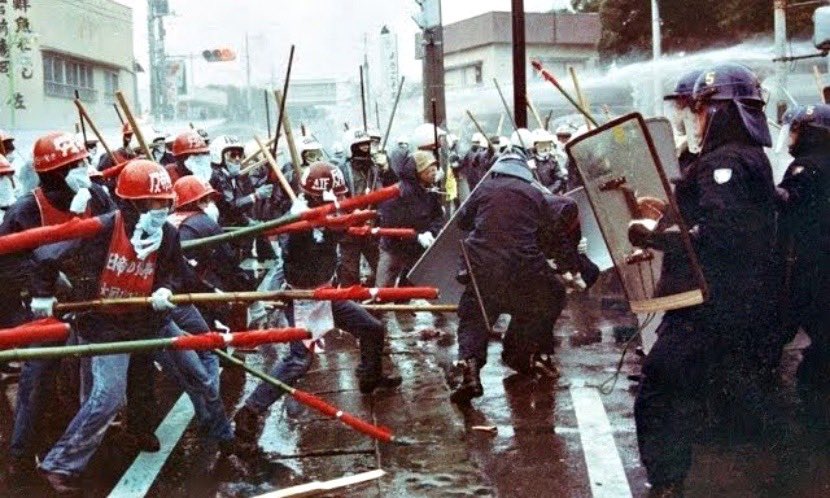 It is difficult to provide a clean narrative for the Sanrizuka Struggle. To some, it's a story of disenfranchised rural farmers rebelling against the encroachment of powerful urban Tokyo. To others, it's an environmentalist movement in opposition to Japan’s rapid industrialization. To still others, it's a radical socialist uprising against American-allied Japanese capitalism. Or, its just good old-fashioned NIMBYism. It doesn’t fit cleanly into any one box; It can only be understood as a convergence of all these elements, resulting in a years long (and ostensibly still happening) struggle against Narita International Airport.

As Japan survived the devastation of the mid 20th century and sought to rebuild its economy, it did this often at the expense of its rural and agrarian population. Tokyo was pushing industry and growth forward at all costs: farming made up 20% of its GDP in 1955 and shrank to less than 5% by 1978. Though the Japanese economic miracle saw much of the rest of Japan becoming affluent, farmers experienced the opposite. Between 1960 and 1985, income for farmers increased by just 5% while costs of living rose 14x.

Additionally, Tokyo was funding massive infrastructure programs as part of the effort to industrialize and modernize its economy. Many of these programs aimed to promote the profitable (and corrupt) concrete industry. Serious pollution problems began to appear, including industrial mercury poisoning and severe effects from air pollution. This gave rise to the Japanese environmentalist movement, which reached its peak in the early 1970s. This took form as a highly local grassroots movement concerned with the direct effect of industrial pollution on the environment.

Meanwhile, the Japanese New Left had had a very active few decades since the end of World War II. The Anpo Protests galvanized anti-American sentiment and the left in general, creating in its stead a vast infrastructure of highly organized (mostly student) radicals. Branching off from Anpo, these young and passionate organizations created/supported other movements, including burakumin rights, anti-nuclear, worker’s strikes, the university struggles, and the environmentalist movement.

As the Japanese economy grew at an unprecedented rate, Haneda Airport in Tokyo was at capacity. Bigger airports were needed to handle increases in air travel, to meet international safety standards, and to prepare for supersonic transport flights. It was deemed necessary to build a second airport to the east of the city in the agrarian Sanrizuka-Shibayama region, near the town of Narita. This area was chosen because 30% of the land area needed was already owned by the government. Also, rural areas such as this were strong supporters of the LDP, and most residents would go along with the government's plans for the area. However, there was a vicious minority of residents who would not accept that their land be forcibly taken from them. These were long-time residents who were making a decent living from farming. From this population the protests stemmed.

In 1966, immediately after the announcement of construction plans, local farmers formed the “Sanrizuka Shibayama United Opposition League Against The Construction of Narita Airport”, also known as Hantai Domei. For the first year and a half (July 1966-late 1967), they tried strictly peaceful forms of protest. They distributed leaflets throughout Tokyo, met with officials, and made appeals in court. When this was ineffective, Hantai Domei grew radical and abandoned these strategies for more active resistance. Many of the farmers were veterans of World War II and used their expertise to build tunnels, bunkers, and ditches in order to obstruct construction. They employed a variety of strategies, including chaining themselves to trees, lying in front of diggers, and even used catapults to launch feces at construction workers. They also bought land in the path of the Airport’s construction and divided it among Hantai Domei members, making the legal process of acquiring land more complicated for the developers.

The Zengakuren, a massive network of student activists, began to take notice. They trickled into the area and joined the protests. Some went so far as to live in Sanrizuka for extended lengths of time, providing free labor and living with local farmers. The dominant faction that joined the protest movement within the Zengakuren was the Chukaka-ha, which distinguished itself from other left groups by being willing to use violent means to achieve their ends. This escalated the fighting to new heights, with organized charges and molotov cocktails.

The developers moved forward to attempt to complete Phase I of construction, which originally planned to include five runways, a terminal, and a bullet train bringing people to and from Tokyo. The first major clash took place in October 1967, where 1,200 protestors faced off against 2,000 riot police. This was followed by several protests in early 1968, resulting in several hundred arrests and 1700 injuries. Tactics became more complex, consisting of wire traps, bamboo traps, barricades, and watch towers. Police responded with increased personnel, water cannons, and heavy machinery. Police used cranes and bulldozers to topple the protestor’s towers, sometimes with protestors still inside. The first deaths came in September 1968 when three police officers were killed in battle.

Though violent protests continued, eventually the developers secured the land they needed and completed the first runway in 1973. However, the airport was still unable to open because it required a pipeline to supply the planes, which was hotly contested on environmental grounds. The standoff continued until 1978 when the terminal building was finally completed. The authorities solved the pipeline problem by arranging for fuel to be brought in via train. The authorities, now determined to open the airport, attacked the heart of the Hantai Domei: a 200 ft. tall steel watch tower. A massive 23,000 strong rally was held in its defence. A fight ensued, resulting in the death of one student and one police officer.

The airport was set to open on Mar. 30 1978. Though the airport was protected by 14,000 riot police, the protestors would not go down silently. While a rally of 10,000 protestors kept the police busy, a burning truck burst through the airport's gates. The airport was flooded with hundreds of radicals, fighting police and causing chaos. Meanwhile, fourteen militants popped out of a manhole cover near the control tower, fighting their way inside whilst under fire from the guards. After much struggle, six managed to reach the control room. Once there, they destroyed equipment, painted a hammer and sickle on the window, and raised a red banner. This last-ditch effort forced the airport’s debut to be delayed by several additional months.

Finally, Narita International Airport opened on May 20th, 1978. It was equipped with just one runway, one terminal, no bullet train, and only a third of the originally planned landmass.

After the airport opened, protests died down significantly. Weak leadership led to Hantai Domei fracturing into several smaller organizations, decreasing enthusiasm for the movement. The government took advantage of the lull by at last completing the pipeline in 1983. However, when the government decided to move forward with Phase II of development in 1985, they may have overplayed their hand. Hantai Domei received a second wind of support and Chukaku-ha quickly arrived on the scene. Battering rams, molotov cocktails, and steel pipes were used to attack the police, resulting in another 241 arrests and nine injured riot police. Despite this temporary enthusiasm, at this point many of the protestors felt the airport was inevitable and the movement futile. Though membership waned, determined radicals turned to more daring and dangerous tactics. They went after the contractor's headquarters, planting explosives at  21 facilities throughout Japan. Even this was insufficient to stop Phase II from moving ahead, and another terminal was completed in 1992.

Narita Airport is here to stay. As the radicals and farmers alike grew older, the Narita cause was mostly abandoned. Though protests are still held, they are in smaller and smaller numbers and usually peaceful. The airport expanded with new runways built in 2002 and 2015, and a third runway is in consideration. With the construction of the third runway, most of the original plans for the airport will finally be realized.

Though ultimately a disheartening story of Goliath defeating David, the Sanrizuka Struggle is a reminder of what a passionate, sustained protest movement is capable of. The Struggle is an important lesson for governments about the unintended consequences of rapid economic growth. It also teaches us that those with legitimate grievances must be given peaceful ways to address those grievances or risk radicalization and violence.

“The Battle Front for the Liberation of Japan – Summer in Sanrizuka.” Harvard Film Archive, harvardfilmarchive.org/calendar/the-battle-front-for-the-liberation-of-japan-summer-in-sanrizuka.

“Sanrizuka: The Struggle to Stop Narita Airport.” Throw Out Your Books, 23 Mar. 2019, throwoutyourbooks.wordpress.com/2014/02/11/narita-airport-protest-movement-sanrizuka