The Naked Lies of Communism 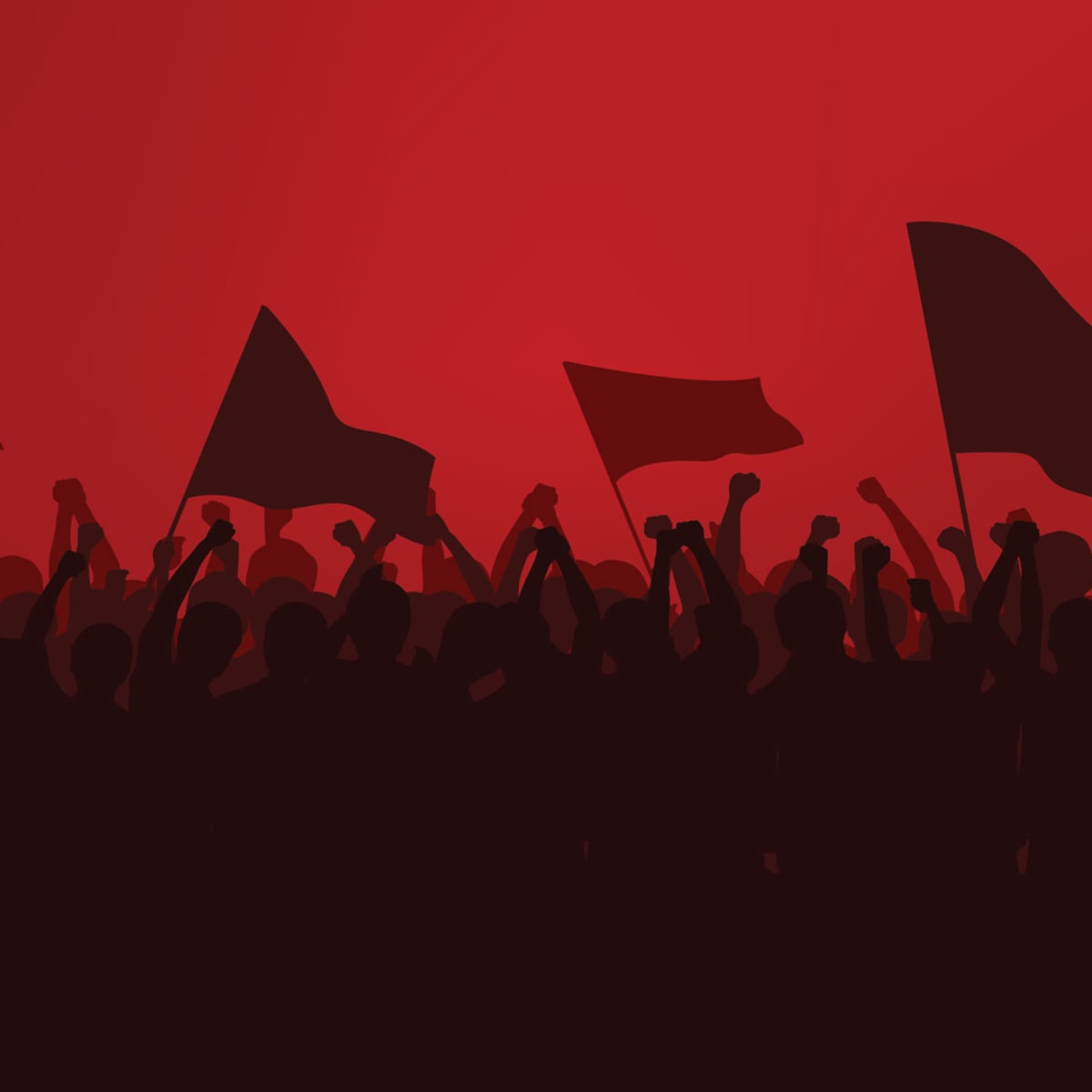 Perhaps what makes humans the strongest race is their ability to be contingent upon their free will, morals, ethics, and ability to rely on their principles for guidance. These ideals clash with Karl Marx’s vision of a dream society: one where he can strictly regiment and rebuild a new breed, governing them to be self-destructive and criminally conditioned. He amorally denies the possibility of a soul and believes his existence was an incidental gathering by the accidental forces of nature. By accepting this, his followers are abiding by the jungle law of selfish survival. In this day and age, technological advances have provided humans with clothes, shelter, food, and goods. Marxist men could not have come at a more illogical time, standing as a threat to this accomplishment.

As a political fugitive, Marx was driven away from Germany, Belgium, and France. He continued his lifelong revolutionary work from the slums of London. To a person living in the filthiest neighborhoods, equality makes sense. Being equal to a rich person would sound fairly nice to someone poor. But what about the well-off people? Do we repeat history by seizing their wealth and money in the name of “equality?” It’s quite ironic for a person fighting for equality to rob others of their wealth and status. The truth is, we all crave equality, but only with those we consider above ourselves. Equality can only be achieved through one of two options: either everyone is extremely poor, or everyone is extremely rich. The GDP (gross domestic product) of the socialist nations over the past 100 years have collectively stayed stagnant while capitalist countries build up their wealth yearly. Quite clearly, they have chosen to collectively remain poor rather than permit individuals to climb the social ladder and pave their way for success. The following quote is a first-hand narration of an unnamed family friend who is a survivor of the Vietnam War and the Communist Party. He recounts what life was like under the ruling of the Communist Party of Vietnam: the loss of innocent lives, the true meaning of inequality, and the restrictions of freedom.

*Translated from Vietnamese to English; the family friend will remain unnamed.

“My father was a very well known businessman back in the day. We owned a total of 4 houses. They weren’t ordinary houses either. We owned many acres of land and were doing very well. I fled to the capitol at the age of 14 to escape into another house. They [The Communist Party] forced my parents to sign over their business properties and seized all our houses except for one, which my family was allowed to live in. Even so, it wasn’t really our property. They could come in at any time and take whatever pleased their eye. It ranged from gold to even our livestock.

Kayla: What would happen to the families that refused to sign their property over?

“It wasn’t an option if we wanted to live. I had heard of many acquaintances that committed suicide over losing their life savings and everything they owned. We were living under the constant fear of stepping out of line. Freedom simply did not exist for us.”

“True communism,” in terms of Marx’s plan of turning the world into a moneyless, stateless, and classless society, has never been practiced. Until then, the practice of socialism has been implemented globally to progress towards communism. The question is: why would anyone want to live in a fully developed communist economic system where private property is seen as the root of all evil? If private property was abolished, there would be virtually nothing to fight for. The issue is, private property is an outlet for creativity and difference. Marx was ignorant of the fact that humans are innately jealous, indifferent, and greedy. In joint families of a small population, they can adjust their earnings, share their resources, and pool the proceeds made by the family. Keyword: family. In a country with billions of people, jealousy is bound to take root, and the chances of indifferences arise. It is illogical to compare a tight-knit family community to a nation of billions and expect the same outcomes. Working against human nature would cause wages to be eradicated. The differences in skill, training, mentality, merits, and physical abilities would make no difference in social standing. This ideology does not provide people the incentive for excellence because there is no form of recognition for their work. Once people realize there is no net profit drawn in for them, the motive to make money stops. Communism falsely promises that even in the absence and lack of work, the stateless/classless society will continue to manufacture greater quantities of goods than any other existing system. It’s comical that this theory will somehow magically ensure that communist production will obtain a state where human needs are fully met. What happens when a human is not satisfied with four cars and demands more? After all, a man is entitled to all the cars he wants under full communism. And even if he is satisfied with more than four cars, what happens when he sees another person with a newer model and even more cars? Human greed is the problem under a system that assumes unlimited merchandise intending to eliminate markets, money, and wages. Bottom line: inequality has to exist in every society.

Not only is his theory on wages easily disproved, Marx believed that technological developments would make machines so powerful that they would be a threat to the working class. With the introduction of new machinery, the competition for jobs would cause wages to drop. But technological development has created more jobs than it has destroyed, and capitalism has brought society closer to the economic dream of “full-employment.”

Marx’s fourth framework of society, communism, is also failing at large due to its paradoxical ideals. It gives voice to lower-income classes and laborers, yet denounces big industrial productions that drive these workers’ lives daily. These manufacturers bring jobs, money, and income for the poor. Take away their source of money, and many are left in poverty, expecting society to take them in and nurture them. This system eventually succumbs to the weaknesses of human nature; the sheer idealism of the doctrine is far from reality. As fervently as some hope, communism will never produce a new change in human nature. Those who think otherwise are brainwashed into believing that they are overshadowed by businesses feeding off their labor. Communism takes away from the freedom of the citizens, and without freedom or liberty, the entire system will choke and collapse--democracy, economy, production, everything. The unnamed family friend states,

“We were taught all about communism in school. History consisted of learning about Ho Chi Minh, a Communist leader who stole everything from our families. We had to praise him or face the physical abuse by teachers. Sometimes, our families would have to suffer for our opinions.”

This is the true meaning of oppression. There is no freedom. No opinions. No tolerance. Communists ensure everyone has the same ideology, and those who fall out of line are punished, along with their families. Too often, Marxists bite back with the argument that “they weren’t true communists.” Marxists try to defend their unworkable ideology against the evidence that suggests communists regimes were brutally tyrannical and implemented violence to distribute wealth (only to the communist party elites, of course). Rather than denying that communists terrorize society to achieve power, they try to claim that those who perform violent actions are not true communists. Thus, criticism should not stand for communism. This informal fallacy known as No true Scotsman attempts to preserve the legitimacy of a claim by dismissing certain members of a group and claiming they weren’t true members. While, yes, arguments that claim true communism has never been practiced or achieved are valid, the unavoidable truth is that the ideology of communism has given birth to many bloody dictatorships. “True” communists or not, those that have practiced it have contributed to the estimated 100 million deaths in the 20th century, the mass poverty, and the genocides documented in The Black Book of Communism. Although it is a lot less common now, 20th-century communism relied on terrorism to overtake society to build their own utopias.

In the roughly 100 years since the Bolsheviks seized power in Russia in 1917, 100 million have died from the tyrannical grip of communism, more than any other repressive regimes combined during that period. Stalin wiped out 10 million, including his labor camps and mass executions; Mao’s Great Leap Forward executed 45 million and killed more indirectly through man-made famines. Those who survived were forced to give up their property by force and were condemned to serfdom. Even if communist states allowed periodic elections, democracy and communism could never coexist. By definition, communist states cannot be democratic. Democracy functions on criticism and opposition, which was never allowed by communist regimes. How can opposing parties exist if the media, facilities, and services are state-owned? It’s no coincidence Karl Marx developed this theory and carefully handcrafted facts and statistics to justify it. For example, Das Kapital uses a falsified study from Friedrich Engels on British Industry that contained manipulated data. Communists who pride their philosophy as “scientific” are blind to the fact that Marx and Engels frequently twisted quotes to prove their points. The foundation of their “scientific data” is built on nothing but lies.

An overwhelming number of people today still believe in this outdated ideology, obscene in theory and violent in practice. A hundred million deaths, billions of lives destroyed, and ruthless restraint of democratic rights for the unreachable dream of equality are all ramifications of communism. Karl Marx truly developed the most barbaric joke in human history.