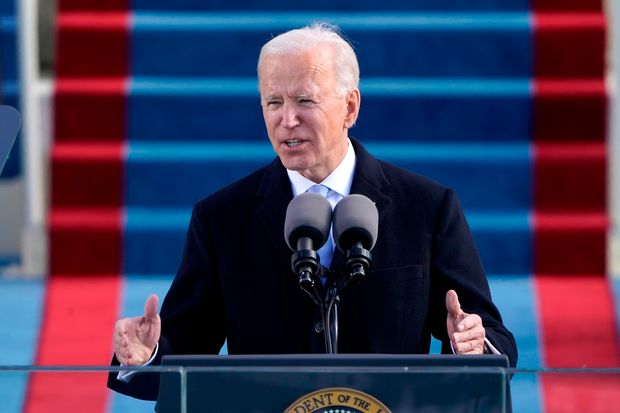 Joe Biden made his 2020 campaign revolve around one word: Unity. He made it clear that “without unity, there is no peace, only bitterness, and fury.” Most would agree that this statement is correct. For the past four years, the country has been bitterly divided. A term of unity and bipartisanship would be quite welcome, especially during the many crises we’re facing as a nation. There is only one issue. For the past two months, Joe Biden has failed to govern with unity. He has adopted unfair, controversial, and special-interest policies that consistently abandon his idealistic campaign promises of unity and the beliefs of the American public.

Joe Biden made several campaign promises that made him and his allies seem favorable for election. The promises he made were usually ones that united most Americans and were made in the public’s interest. Time and time again, Biden has let down the public, either on a technicality or outright. For instance, Biden spent a large amount of campaign time discussing mask use and its benefits. He repeatedly reiterated that, if elected, he would use federal power to mandate the use of face masks in public places nationwide. This is a motion that had been taken by many states, both red and blue, over the course of the pandemic. These mandates appeared to slow the spread and deadliness of COVID-19. These promises were in sharp contrast to the attitude of President Donald Trump. The previous president had casted doubt and uncertainty, sometimes supporting masks while mocking them at other times. Trump never considered a national mandate, stressing the practice as voluntary. This is what made Biden’s promise so appealing to most. However, his “national mask mandate” was eventually reduced to merely a mask mandate on federal property. This letdown made very few people happy. This action was not in the favor of unity and healing in regards to the virus and the country’s divisive and dishonest history.

Another disappointment arose in the form of Biden’s promise to Georgia voters at the height of the high-stakes double senate runoff campaign in January. He promised voters that “victory by Raphael Warnock and Jon Ossoff would mean $2,000 stimulus checks would be sent out immediately.” He painted the election as life or death. It was portrayed as either instant payments or no payments at all. Of course, Warnock and Ossof both won their races, but the unexpected happened. “Immediately” became nearly three months later, and “$2000” became $1400, passed alongside a bill full of partisan pork. These checks were another delayed and broken promise that seemed to have support on its own from both parties. However, for Republicans, the problem with this “COVID relief package” lies in the controversial and detrimental fluff, not the checks themselves. If Biden wanted to push for unity, he should have reformed his “American Rescue Plan” to focus on Individual Americans and $2000 cash payouts and not the fluff present within the bill. Too much of the plan is less focused on emergency and much-needed relief for the people, small businesses, and schools than it is on affirming long-time neoliberal wishes. That is not unity and that is not focusing on more pressing issues or lowering the temperature.

Biden’s actions on the southern border of the United States have been the most disastrous and dividing decisions he has made so far. Originally pledging to be relaxed on illegal immigration, promising no deportations at all for 100 days of his administration, Biden has since silently doubled back on his promise. This comes after a federal judge blocked the request to halt deportations, saying it would cause “imminent and irreparable harm” to the state of Texas. Multiple other judges agreed. On top of this, while promising at-large deportations to decrease, his administration has been carrying out deportations at the same rate as Trump. Another Biden immigration promise blunder came with the infamous line, “kids in cages”. Biden made a commitment way back in 2019. He “pledged not to hold migrant children in detention centers if elected president.” A rather bold and noble promise, however, he found it quite hard to maintain. Biden has been keeping old sites open and opening up more to house migrant minors. This necessity of new “overflow facilities” is in part due to Biden opening the metaphorical floodgates on illegal immigration. Blindly ending Trump-era policies that helped to keep a cap on asylum seekers and illegal immigration (just because of who signed the papers), Biden has sent an unofficial signal to thousands that the doors are open. In short, Biden has made the worst and most controversial decisions he could have on every individual aspect of immigration, and he has created a crisis. While attempting to take a humanitarian approach, he has knowingly approved a wave of immigrants and refugees that shows no signs of slowing down. He isn’t prepared for this, and he misled the public. This shamble of hypocrisy at the southern border is not unity, it is not healing.

Biden has kept his promise on some things though, most notably his promise to cancel the Keystone XL pipeline via executive order. This action, however, is not supported by the majority of American adults. In fact, the highest percentage of people who wanted the pipeline to be constructed comes from those who live in the regions affected by the line (68%), and those who pay ‘very close attention’ to news regarding the pipeline (78%). This does not seem like unity. Opposing public consensus, especially the consensus among those it affects is not governing consciously. At least he is keeping true to his word, though, which is sadly an accomplishment.

The only thing remotely unifying about Biden’s presidency has been his cabinet nominees. Of the 18 cabinet nominees confirmed so far, only four were confirmed with less than 66 senate votes, and half garnered more than 80 votes in their favor. Every nominee has had at least some Republican support, a sharp contrast from the numerous party-line legislative votes forced through the house and senate. This proves that cooperation and bipartisanship are entirely possible. There was a potential for cooperation. The fact that this opportunity for moving forward cooperatively was not seized is Biden’s, Pelosi’s, and Schumer’s fault. Joe Biden promised to put aside partisan tricks if he was elected. He promised that we would get through these numerous crises together. In reality, he acts no different than any other politician once back in power.

Biden’s inconsistency is rampant. It is clear in his promises versus his actions, his statements versus his beliefs, and in his demands versus the law. It is visible as he continues to gaslight opponents and predecessors. What it all has in common is that it contributes to Biden’s lackluster first few months and abandonment of unity in the face of reality. The unrealistic and untruthful promises he made were idealistic. Even still, he did not make much effort to realize them. The American public must be wiser than to keep falling for this. When the man who has spent half a century in Washington is only now realizing that it might not be as easy as he thought it would, we have a bit of a problem.