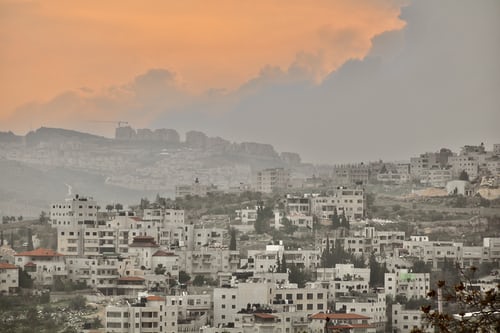 Land of Palestine & The Ottoman Empire:

The land of Palestine was acceded to the empire of the Ottomans after the defeat of Mamluk Ruler Kansu Gauri by Ottoman Sultan, Yavuz Sultan Selim, in the Battle of Marj Dabiq in 1516. Following the loss, Yavuz Sultan officially entered Jerusalem and brought the land under the Ottoman Empire on December 29, 1516.

A few key notes to be taken before we further note the progression of the land of Palestine:

There was no entity called “Palestine '' under the Ottoman Empire. It fell under the administrative divisions of the Turks. Under the Ottoman Turks, Palestinian territory was divided into three states: The Jerusalem Division , Gaza Division and the Nablus DivisionThese were all linked to the Ottoman Government or administration through the Province of Damascus.

The situation of conflict that prevails now in the region had not existed then, but there was factionalism and petty disputes; however the Ottoman administration had realized that the site of Palestine had great religious importance for three religions : Judaism, Christianity and Islan. Thus, they enforced a set of rules and regulations known as the “status quo” that allowed the given religions to visit their particular holy sites whenever they wished to. In fact, a few sources note that Palestine was the most easily accessible land that was exposed to European merchants and other visitors under the Ottoman sources.

The policy of tolerance towards Christians and Jews had remained intact throughout the years of the Ottoman rule. The Ottoman Empire was one of the first administrations to welcome  Jewish immigration in the early years when they faced prosecution in Spain and other parts of Europe. However, the concentration of Jews was much lower in the Jerusalem region, as most of the Jews had opted to live in cities like Safed, Hebron and Tiberias. The region had maintained a general sense of peace until the Western Invasion in the 19th century, which destabilized the geo-political balance of the region, causing various crusades and chaos.

A few key notes to be made at this point are:

The Shift of Land from Ottoman Turks to British military occupation:

To understand the shift of territory of Palestine from one party to another, we will need to look at three incidents :

The First Battle of Gaza was fought between British and Turks in which British wanted to capture Jerusalem but were defeated by the Ottomans after the Ottomans successfully held the Gaza - Beersheba line.

The Second Battle of Gaza is where the real faults occurred, and the territory of Palestine slipped from the hands of the Ottomans. The Ottomans had established the Yildrim army—or the thunderbolt army—with the German regiment to hold the territory, but at the end the Ottomans lost to the British and Egypt Expeditionary forces as they were outnumbered, had obsolete and weak equipment, and were weakened by Sarikimis and Canal attacks

Enver Pasha, one amongst the triumvirate of  “Three Pashas,” was in charge of the front and could not decide where to concentrate troops. The British Prime Minister had then signalled to take Jerusalem by Christmas. The result ended as Ottomans expected an attack in Gaza;they were flanked and Britain took Beersheba in 1917. The strategic and tactical faults of the Ottoman army can be seen in the report sent by Mustafa Kemal Pasha to Enver, Talat and Cemal Pasha in 1917.

The Fall of Jerusalem was the key event in Britain gaining mandate over Palestine. After intense fighting and numerous casualties, the Ottoman Turks withdrew from Jerusalem on December 8,1917 mainly due to their psychological condition and determination to not damage the holy city. On December 9,1917, Mayor Al - Husseini handed over the iconic key to the city and delivered documents to Major Allenby signifying the fall of Jerusalem under the British occupation.

Palestine under British: A brief summary of events:

We will cover this topic area by discussing first the “Three incompatible promises,” followed by the important agreements and treaties.

The first notable event that occurred in the geo-political region was the MacMahon-Husayn Correspondence 1915. The MacMahon - Husayn Correspondence refers to the letter between Sir Henry MacMahon of Britain and Husayn ibn Ali (King of Hejaz, Sharif of Mecca and High Commissioner to Egypt). The importance of the event lies in the broad ambiguity of the letter and its scope of interpretation.

The first note can be made when Sir Henry MacMahon mentions that the British will “recognize & support the independence of Arabs within the territories proposed by him.” These territories in broad mention were “Syrian Zone” and “Iraq”. This particularly drew the interest of Husayn as he was planning a full scale Arab revolution in the region. The letter also dismissed the rumors about the possibility of the “Sykes - Picot Agreement” (which happened a year after the letter) as “Turkish War Propaganda.” A key fueling factor of this letter was the French concept of “ La Syrie Integrale” which meant that Syria was an integral part of the colonial lands

By interpretation, the then Syrian Zone can be seen to consist of Lebanon, Palestine and Transjordan, but later upon the enforcement of the mandate, these incompatible promises were broken; the reasoning provided by the British government  with no verbatim mention of Palestine, caused major upheaval in the region.

The Sykes Picot agreement was the second incompatible promise. It was a secret agreement signed between Britain and France with the consent of Italy and Russia. The agreement aimed to shape the region's borders and spheres of power influence between the colonial powers without any regard for the ethnic, cultural or religious factors that existed in the highly volatile region. The agreement can better be defined as the device that split the land inheritance of the falling Ottoman Empire between predatory annexing powers.

The agreement was unknown to the world until Vladimir Lenin and Trotsky exposed the document in a Russian newspaper as a revolt against the Tsarist Empire. It was then marked by Lenin as the “agreement of colonial thieves,” which is highly apt if seen in the context.

The agreement is believed to be the root of territorial and political problems upto date. A few of the issues include:

The Balfour Declaration is the third incompatible promise made by the British post occupation of Palestine. The British issued this declaration on November 2,1917 and claimed to form a “ national home for Jewish people.” The public promise of the “national home” caused a major uprising by Arabs. It is believed to be one of the main causes to have triggered the Nabaka ethnic cleansing in 1948 later in the timeline.The Balfour Declaration was believed to be a thin veil to hide colonialism in the region.

The problems of the Balfour Declaration rose out of mainly three causes:

The Balfour Declaration lit a fire in a highly volatile situation and started the stir of heavy violence in the middle east.

A committee led by Henry King and Charles Crane arrived on the site of conflict in 1919 and were tasked to examine the situation near and in the former territories of the Ottoman Empire. The report was critical of situation and suggested the following measures to bring some form of stability to the region:

The Commission was rather biased in its approach to the situation; the constituent investigators of the case being from the colonial powers raises the credibility of the report. The fact that stability and enforcement were required in the region was ipso facto present but using the chaos in the region and inflamed tensions to justify a foreign mandate over a highly volatile situation is a policy disaster. To view this situation under a microscope, it can be said that two hostile factors were supplemented in energy by the introduction of a third factor with no intent of bringing conciliation between the hostile factors. The summary of the Commission’s reports is rather minuscule in content but saw devastating effects in the following period of time.

Faisal-Weizmann Agreement is a geo-political agreement signed between Emir Faisal, the son of King Hussein of Hejaz (the leader of independent lands) and Chaim Weizmannn, the president of the Zionist Organization. The close factor contact between both the hostile factors precipitating hostilities should have been looked at with less hope of conciliation in initials attempts but ironically resulted in the most surprising conclusions:

Both the points are a complete deviations from their radical stances that were taken by the parties in the initial stages. The parties submitted to the Council and waited months for the decision, and London declared its for Palestine in 1920 ending any possible solution through third party contact.

The Palin commission was appointed to investigate the Nebi Musa Riots that took place in Jerusalem. This reports some credibility with regards to the facts presented as it highlights and acknowledges the conflicts that take place with previous promises and shows it as a flashpoint for the conflict that occured in the region.

The report highlights the following points :

This indirectly lead to support views of General Bal, who wanted to reduce the authority of the Zionist Commission. The report turned the direction of the British to waive military administration with civil administration. The Palin commission report yet was concealed and never saw the light of day.

In the 1922 White Paper, also known as the Transjordan Memorandum, the British government re-asserted the Balfour Declaration within the framework of British Mandate, which split the Palestinian territory by the Jordan River and established the emirate of Transjordan. This territory split also caused further territorial problems leading to the fuelling of communal hatred and violence.

The League of Nations in 1922 ratified a declaration appointing Britain as mandatory for Palestine with specific task of “ putting into effect the Balfour declaration & adopted by other allied powers, in favour of establishment of Palestine as a national home of Jews”

This act guaranteed international recognition to Jews as a community and Israel as a state. It gave the historical basis for reconstitution of the state from an Arab majority land to the modern state of Israel.

This paper covers the historical aspect of power transfer in the most volatile time period of the land of Palestine from the reign of the Ottoman Turks to the British Mandate of Palestine. The general trend to be noted is that the most major clashes and loss of lives have taken place when feudal lords exploit the time gap between the shifting hands of power. The paper also duly notes the sensitivity of the issue and thus acknowledges the past mistakes and mistreatment of both the parties which administered the land. As a concluding note of historical action of the region, it can be said that:

“ Neither party had intent nor incentive to nourish the region and solve the problem. The question of better administration lies in the choice of the more and lesser evil. A solution or stability hasn’t arrived in the region yet but with global efforts and reconciliation efforts glimmers hope of a solution”