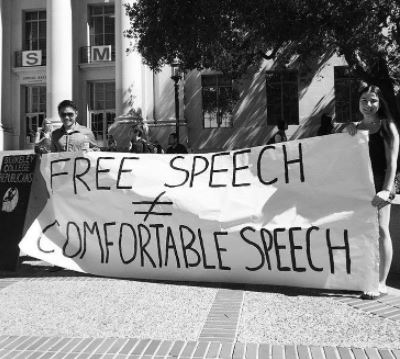 Colleges Campuses: Where Free Speech is in Danger

America was created to stand as a bastion of free speech, to set an example of the vitality of free expression. The Founding Fathers understood with certainty that the government’s involvement in the regulation of speech would prove catastrophic for a free society, as speech that is not spoken dies with the thinker. Regulating speech regulates thought, which regulates actions, programming a nation subserviently. That’s the danger of a one-party state with state-sponsored media.

What about students? Self-censorship is a highly common phenomenon on college campuses. While self-censorship is not an exclusively conservative concern, the greatest implication is in conservative students. About 60% of students have reported keeping quiet about their beliefs in fear of repercussions, with “strong Republican”-identifying students responding in overwhelming proportions—73%—whereas only 52% of “strong Democrats” reported the same[2]. As conservative students are already the minority on college campuses[4], this discrepancy in fear of repercussion further pushes conservative ideas away from the limelight. Coupled with a faculty of overwhelmingly left-wing inclinations, it is no wonder that the fears of rightwing media outlets, politicians, and pundits are commonplace among the conservative base[5][6]. College campuses are microcosms of the future. Are educational institutions, regardless of their level, purporting to be free marketplaces of the exchange of ideas? Colleges value diversity in race and socioeconomic backgrounds, but what about ideology? Is it true diversity if students look different, but all think the same?

We’d be remiss if we did not dig deeper into the origins of this immense ideological imbalance on our college campuses. One fundamental reason is the inherent attitudinal difference between liberals and conservatives on the nature of free speech. Quite ironically, conservatives tend to view free speech through a lens of classical liberalism, while liberals have a more hawkish stance toward unpopular speech. A recent poll conducted by the University of North Dakota found that 85% of liberal students think professors should be reported for saying something offensive compared to 41% of conservatives[7]. Similarly, 76% of liberal students think a student who says something offensive should be reported, compared to only 31% of conservatives[7]. However, “offensive speech” lies in the eyes of the beholder. These differences on the implications of “acceptable speech” and the repercussions of stepping outside the mainstream college campus norm mark a clearly contrasting vision between the respect of free speech along ideological lines. And while a supermajority of the general populace (71%) believes that PC culture silences important discussions that society needs to have[8], liberals tend to be slightly less tolerant to ideological diversity. This is especially true considering the recent episodes of speakers being banned or threatened on college campuses. Oftentimes, these speakers are not even overtly political figures. Consider Emily Wong—a physician at the Massachusetts General Hospital who was scheduled to give the commencement speech at Hampshire College. However, her invitation was revoked because students were concerned that she could not “directly address student concerns” regarding racial issues and transphobia[9]. Other times, speakers like conservative commentator Ben Shapiro required $600,000 in security to protect from anticipated violent attacks[10]. Even liberals like former CIA director John Brennan are not exempt from the viewpoint intolerance: the event ended early after protestors interrupted him three times for his involvement in drone strikes in the Middle East[9].

What is the ultimate result of this continuous culture lashing out against free speech and viewpoint diversity on many of America’s college campuses? Echo chambers. One-sided political dialogue. The growing popularity of radical ideas that run directly counter to the American political culture. None of these ultimate outcomes are healthy for the cohesion and civility of the future of this country.

Stephanie is a 17-year-old from Katy, Texas. She is interested in educational, health, and domestic policy. Beyond her involvement in politics, Stephanie is an avid science enthusiast.