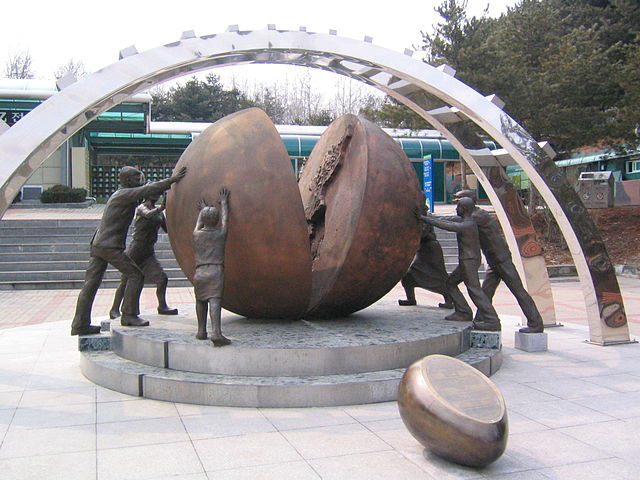 With North Korean patrol officers eerily marching around his hideout, Kang held his breath and clenched his teeth. He thought of giving up: surely it wasn’t too late to turn back. But, as memories of the concentration camp came flooding back, Kang made up his mind. Slowly but steadily, he made his way through the untamed currents of the 460 foot-wide Yalu River...

The year was 1992 when North Korean Kang Chol-hwan decided to escape from the Yodok concentration camp and find passage to South Korea. Since defecting, however, Kang has lost all contact with his family. Many, like Kang, have also lost communication with their relatives after defecting from North Korea. In attempts to send information, including anti-North Korean propaganda and letters of correspondence to the North, some defectors have flown balloons carrying leaflets over the border. Yet this privilege is now stripped away: On December 14, 2020, South Korea's parliament passed the anti-leaflet law, criminalizing the act of sending items such as printed materials, goods, or money across the Korean Demilitarized Zone (DMZ) and prohibiting loudspeaker propaganda broadcasts.

South Korean President Moon Jae-in and his proponents stress that the legislation will assuage tensions between North Korea and South Korea. The dissemination of information—especially anti-regime propaganda—was a primary cause of heightened unrest in the Korean Peninsula in 2020. To signal its displeasure, North Korea blew up a joint liaison office near the city of Kaesong on June 16, 2020. Moon’s administration has long advocated for peacemaking and dialogue, with the president engaging in talks with North Korean leader Kim Jong Un in 2018. Though this progressive approach may be critiqued as weak and ineffective, the alternative solution of confrontation and isolation is much less appealing. In the past, conservative administrations downplayed negotiations and took a strict stance against North Korea. Aggressive attitudes culminated in a dangerous military confrontation where North Korea shelled South Korea’s Yeonpyeong Island, killing three citizens. Considering North Korea’s strong denunciation of cross-border communication, the anti-leaflet law appears to be a rational step in not only preventing conflict but also in advancing Moon’s agenda for peace.

However, the Moon administration’s decision to bar all communication with North Korea has clear consequences. Along with restricting an important method of communicating with North Koreans, the law curtails the ability to criticize a dictatorship fearful of reform. Even policymakers in the U.S. have taken note of the possible implications on human rights: Chris Smith, a U.S. Republican congressman and co-chair of the bipartisan Tom Lantos Human Rights Commission, called the bill "frightening" for “democracy and liberty.”

Indeed, North Korea is notoriously known as one of the most oppressive countries in the world. Democratic rights such as freedom of expression, religion, and assembly are all curtailed, while political opposition and trade unions are banned. Moreover, a 2014 UN Commission of Inquiry found that the North Korean government frequently sanctions atrocities including murder, enslavement, torture, rape, forced abortions, and forced labor in secretive prison camps. According to Human Rights Watch, women in North Korea undergo pervasive gender discrimination, sexual violence, and government-endorsed gender roles. The government has also recently intensified harsh and isolationist measures by hindering the flow of information and stringently controlling food distribution.

While the anti-leaflet measure likely will not be lifted any time soon, South Korea can assist North Koreans in different ways. For one, Seoul should provide defectors a platform to speak out. In 2018, the Human Rights Foundation exposed a conflict in which South Korean government officials prevented North Korean defector Thae Yong-ho from delivering a TV interview, violating his freedom of speech. As an upholder of democracy, South Korea should instead promote and uplift previously repressed voices.

Additionally, North Koreans are suffering invisibly as they lack developed medical facilities and government support amid a raging pandemic. Even though the North claims to have no confirmed cases, economic data imply that Pyongyang is having difficulty containing the virus. For example, The Diplomat reports that foreign currency restrictions have quadrupled the cost of essential foods like sugar, placing even more citizens into poverty and starvation. In addition, severe floods last June and September destroyed critical infrastructure, which undermined North Korea’s agricultural production plan and exacerbated food insecurity. Given the detrimental situation in the North, South Korea should offer a helping hand by providing humanitarian aid and medicinal supplies. Taking initiative and demonstrating courteous behavior may even catalyze intra-Korean dialogue, furthering peace in the Korean Peninsula as a whole.

In the end, ensuring the security of South Koreans and stability in the Korean Peninsula can go hand-in-hand with providing relief to North Koreans. Though Kang might not be able to reconnect with his family yet, his and other defectors’ hopes to share their experiences with the public ultimately rest upon the actions of Seoul.