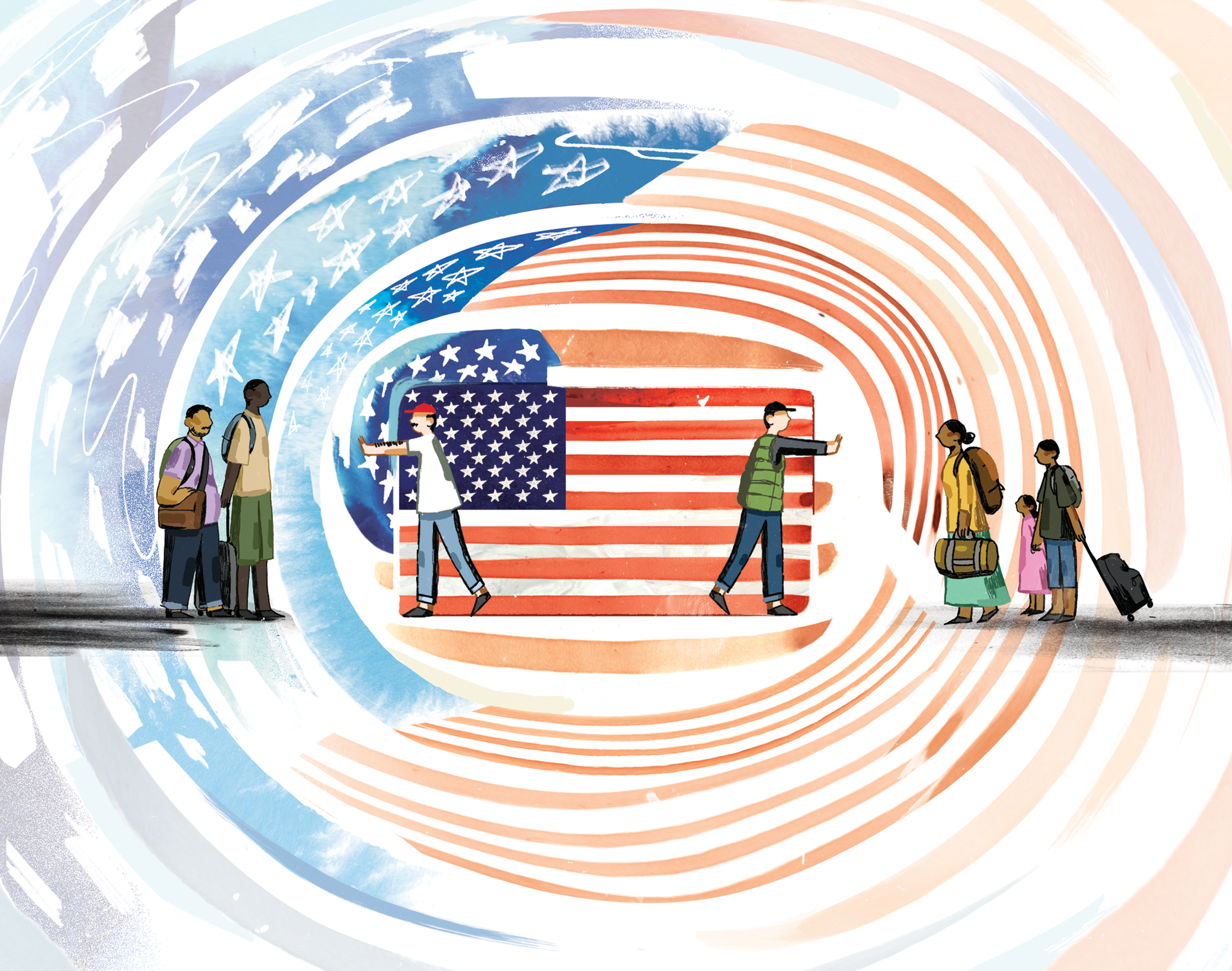 Few people in the country today were alive when the 1922 Immigration Act was passed under at the time a newly inaugurated President Harding. Also known as the National Origins or Quota Act, it served to provide “immigration visas to two percent of the total number of people of each nationality in the United States as of the 1890 national census.” 1 It also excluded what was coined the “Asiatic Barred Zone” from immigrating to the States (although it should be noted this restriction had little new effect. Japan had entered into a “gentlemen’s agreement” voluntarily limiting immigration to the states, the Chinese exclusion act had already taken Chinese immigration out of the equation, and the Philippines were a U.S. colony and could immigrate as they pleased.) The passing of the act marked a sharp decline in immigration patterns and, subsequently, immigrants made up a smaller and smaller portion of the U.S. population in favor of a naturalized and assimilated American Breed.

More people, however, were alive during the passing of the 1965 Hart-Celler Act which would eliminate the national quotas and change the composition of the country and its identity for generations to come. Lyndon Johnson is quoted saying, “This bill that we will sign today is not a revolutionary bill. It will not reshape the structure of our daily lives.” He could not have been more wrong.

Fast forward to today. The United States entertains the immigration of millions of people, nearly a quarter of which have entered the country illegally. The content of our immigration has changed substantially over time. No country should shut out capable, assimilated, endearing candidates based on race alone. Yet immigration in the modern-day, regardless of race, threatens the wellbeing of the nation, its people, and its culture. We can divide the opposition to legal immigration into three main arguments: economic, ethical, and cultural.

Economic: What benefit does mass immigration provide, or rather, what are the costs? The strain on the welfare system is most easily observable: households of legal immigrants who had never completed high school used an average of nearly thirty-seven thousand more dollars in assistance and services than generated by their taxes.3 These deficits continue with immigrants who had only high school education and those in college. Only college graduates created a net benefit monetarily, these being an already tiny minority of immigrants. The economy has been restructured; we have created a national underclass. The largest share of immigrants by a wide margin was from Mexico. In the United States, 67.8 percent of immigrants and their U.S.-born children live in or near poverty, more than double the Native population at 31.1 percent.4 It is strikingly clear that our politicians are where the American immigrant will fall on the economic ladder, the repercussions of which we’ll discuss later. Inconsistencies riddle academia and its perspective on immigration; however, there are observable causal increases in wages when people leave a country. Is it absurd to believe that mass entry into a labor force would have the opposite effect? Labor is itself supply and demand. If we’re importing an excess of labor, no employer will compete for their workers unnecessarily. We’ve rigged our economy to favor low skill immigrants from other countries who are willing to work for less than the native population. So long as there is a surplus of labor the workers themselves will never successfully gain the benefits they deserve. We’ve seen the workforce participation of native populations decline correlative to an increase in workforce participation by immigrants, there is no explanation but displacement.5 The structure of our workforce leads to the second issue of immigration, an ethical dilemma.

Ethical: During the Second World War, the United States saw a distinct shortage of labor necessary, and in response, the Mexican/American Bracero Program began. It was used to fill the agricultural requirements that the war’s period had created. The program ended in 1964; however, the principles of its existence are still tangible today in the arguments of mass migration proponents. This country’s leaders no longer care to invest in the native population. No conversation of immigration ever goes on for long before someone mentions either the jobs “Americans won’t do” or the “necessity” of imported labor, neither of which have ever been proven. We have no respect for the ability of the native population, and we are unwilling to appeal to them. Our economy should exist to appeal to the workers with benefits and wages, instead of relying on exploitable populations for lower wages. Immigrants to our lawmakers have become nothing more cogs of the GDP machine. Not a second thought considers the ramifications of the mass movement of millions of people into a country, past their ability to do a low skill job for a lower wage than a citizen. One such consequence left often is environmental. The Average American’s “ecological footprint” is far greater than the 10 largest sources of our immigration. The carbon footprint of the average American compared to that of the average native Mexican is nearly five times greater.6 The movement of millions of people yearly to a country where their consumption habits and carbon footprints change dramatically has no positive effect. The wildlands and natural resources of the country will be increasingly stripped. The new immigrants must also find housing in their new country, and most often settle in Urban centers, one such example is California. California is the home of thousands of immigrants, and 8 out of the top 10 most polluted cities in the country. Housing patterns also contribute to urban sprawl, pushing construction and crowding into spaces left for grazing and agriculture. Before passing any legislation, the environmental effects of such legislation must be weighed. This has seemingly been forgotten in the immigration conversation. The view of immigrants as workers alone is vile, not to mention entirely blind to cultural effects.

Cultural: Because immigrants are now seen as both necessary and workers alone, there no longer exists a necessary pressure to promote assimilation. The most basic test of assimilation is linguistic; to ask that all Americans speak English fluently should not be a radical proposal. How can we expect to get along with or work with anyone if we cannot first communicate with them? Yet spending only an hour on the phone in an urban center or on public transit, one realizes English is no longer a necessity. An analysis concerning the “probability of [immigrants] speaking English well” shows a substantial decline in probability from 1975 to 1999. Recall that immigration in 1975 was not even majority English speaking.7 It is indisputable that we have dropped the standards we once held for immigrants. Assimilation and nativism had been a theme of immigration for decades in this country. If one did not or could not assimilate to the legal, cultural, and moral standards of the country, they left. More than half of the Italian immigrants who entered the country left before 1910. If, however, the necessity of assimilation is removed and we view immigrants as nothing more than workers, we can’t be surprised when different legal precedents take shape or certain dangerous practices become widespread. Take, for instance, Minneapolis, Minnesota, which has now become the home of thousands of Somali refugees. This in itself is no issue, but we have seen a rise of female genital mutilation (FGM), and although the vast majority of the country is opposed to this practice, which offers absolutely no health benefit, it has become a common practice in these communities. 8 Lastly and most importantly, to anyone who hopes right-wing politics will be viable in the future: The voting trends of immigrants are incredibly one-sided for the reason of block voting. Hispanic voters in the past decades have not voted more than 30 percent republican in any election regardless of policy or candidate. This racialized voting is not suitable for our country. When we view candidates, not by their merit but rather by the R or D next to their names, we sacrifice our republic to the whims of normativity and demographic voting alone. Considering that the most rapidly expanding voter base from immigrants are Hispanics and Asians, both of whom vote overwhelmingly Democrat, there is little reason to believe that if these trends of immigration continue, we will have any diversity of opinion left in our political discourse.

6. “Immigrants in the United States 2002: A Snapshot of America’s Foreign-born Population” Table 2.