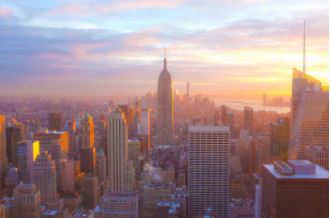 The Yang Fallacy: Policing and Carceral Justice in the Context of the NYC Mayoral Election

Gun violence, educational equity, economic recovery from the COVID-19 pandemic — these were just some of the issues that voters had to consider when casting their ballots in the New York City Democratic Mayoral Primary. From the moment he declared his candidacy in January 2021, Andrew Yang was a favorite to win the race and succeed Bill de Blasio as mayor of NYC. The 46-year-old New York native amassed a large grassroots following during his failed 2020 presidential campaign (his base, which was composed mostly of younger moderates and independents, aptly called themselves the #YangGang), and his name recognition and celebrity-adjacent status led to high showings in early polls. Even so, the crowded field, which included former Sanitation Commissioner Kathryn Garcia and civil rights activist Maya Wiley, meant Yang had his work cut out for him. Ultimately, his lack of familiarity with the New York political scene compared to more established candidates like Brooklyn Borough President Eric Adams contributed to his downfall. Yang, who finished fourth in the initial tally, conceded the election shortly after polls closed. New York Times’ Dana Rubinstein offers a more thorough analysis of Yang’s primary upset.

An important aspect of Yang’s platform, and the mayoral primary overall, was policing in the context of public safety. Yang’s proposal to increase the size of the NYPD and reintroduce a controversial plainclothes unit received major criticism from progressive voters. This proposal reflects a fundamental misunderstanding about the role of carceral justice and policing in the 21st century. The misunderstanding — the idea that more police means less crime — is ubiquitous in many political circles. For now, we’ll call it the Yang fallacy.

“The truth is that New York City cannot afford to defund the police.” This quote is from a speech given by Yang at the site of a triple shooting in Times Square in May 2021. The shooting reflects a worrying upward trend in gun violence in NYC. The city experienced a 54% increase in the number of people shot between 2020 and 2021 and a smaller percentage jump (19.5%) in the number of murders in the same period. Although part of the increase may be attributed to the easing of restrictions as more people get vaccinated, the number of shootings is the highest it has been since 2012. NYC is only one of many large cities — including Chicago, Houston, Philadelphia, and Los Angeles — to experience an increase in gun violence. Preliminary FBI data suggests a 25% increase in murders in 2020 alone. The NYC mayoral candidates had the tough job of balancing the need for public safety with intensifying calls to defund the police and reinvest in community-oriented alternatives (like mental health services).

Candidates like Yang and Eric Adams, a former police officer, structured their public safety policies around the idea that more police would quell the increase in gun violence. They both advocated for the recreation of anti-violence units similar to the plainclothes anti-crime units disbanded last year due to excessive force complaints. Daniel Pantaleo, the police officer who put Eric Garner in a fatal chokehold for selling loose cigarettes, was a member of one such plainclothes unit, as were the four police officers who fired 41 shots at 23-year-old Amadou Diallo in 1999. On the other side of the spectrum is Dianne Morales, the 54-year-old Bed-Stuy native whose campaign was arguably the most progressive on all fronts. Her plan for the NYPD was to defund the police and fund the people (specifically, she would have reallocated $3 million of the NYPD’s budget to other initiatives, including a Community First Responders Department with staff trained in mental health and trauma response).

Unfortunately, Dianne’s vision won’t become reality, at least in the near future. But her comprehensive plan for policing is what all lawmakers who brand themselves as progressive should strive for. Modern-day policing has its roots in the "Slave Patrol" of the early 1700s. Slave patrols were created with the singular goal of capturing and returning runaway enslaved people, and they continued to exist through the passage of the 13th Amendment. During Reconstruction, slave patrols were replaced with militias whose purpose was to continue the economic and social subjugation of black people through mob violence and terror, and these militias slowly evolved into what we now consider police forces. These racist roots are evident today in the over-policing and disproportionate incarceration of black and brown communities. The movement to defund the police recognizes that these disparate outcomes have not been rectified by surface-level solutions, and that structural change is necessary to ensure that black and brown lives are valued as much as their white counterparts.

Increasing the size of police departments, on the other hand, only serves to amplify the consequences of policing, especially in cities with large black populations. A team led by NYU economist Morgan Williams approached the issue using statistical analysis and found that in some areas, increasing the number of police may lead to a drop in serious crime rates and arrests for such crimes. This simultaneous drop indicates that simply the presence of police has the effect of decreasing serious crime rates. However, the team also found that increasing the number of police officers leads to a rise in arrests for petty crimes of which black people face a disproportionate burden. Williams’ study confirms what activists have been saying for decades: less police working more effectively to tackle serious crimes is better than more police working ineffectively and ruining the lives of black and brown people by involving them in the justice system at an early age.

Intimately related to the idea of abolishing the police are prison abolition and decarceral justice. Prison abolitionists like Angela Davis operate on the premise that incarceration does more harm to society than good. The total dollar cost of incarceration is innumerably high (although some estimates put it at about $1 trillion per year when accounting for lost wages, health impacts, and burdens faced by the families of incarcerated individuals), and the cost of breaking up families and entire communities cannot be monetized. Furthermore, incarceration as it exists today doesn’t consider the root causes of crime (drug dependence, poverty, homelessness, etc.), nor does it serve to meaningfully rehabilitate the incarcerated and give them access to opportunities after their sentence ends. The United States has an extremely high rate of recidivism because the criminal legal system fails to address why people commit crime and how we as a society can help them. Decarceral justice is a framework that aims to limit the number of times an individual becomes involved with the criminal legal system. Eliza Orlins was one of three candidates running for Manhattan District Attorney whose platform emphasized decarceration and restorative justice. Orlins’ platform was extremely progressive; she supported ending cash bail, closing Rikers Island, and legalizing all drugs. Although she also failed in her election bid, her campaign created a bold vision for the future of justice in NYC.

So, what does the future of policing in NYC look like? As of right now, the specifics are unclear. The triggering of the RCV procedure and the inclusion of 135,000 test ballots in the initial first-round tabulation led to a delay in election results. The Associated Press has already called the election for Eric Adams, who won with a 1% lead over Kathyrn Garcia. Both Garcia and Maya Wiley, the third place candidate, have conceded. Adams is set to face off against the winner of the Republican primary Curtis Silwa, who has virtually no chance of winning in a city like NYC. Morales and Wiley supporters are rightfully underwhelmed by the results of the election, and they would have been even if Garcia had managed to secure a lead over Adams (Garcia opposed defunding and wanted to increase the size of the Gun Violence Suppression Division). The outcome reflects the pervasiveness of the Yang fallacy even amongst progressives. The bottom line is that transformative change is needed to address these issues, and neither Adams nor Garcia will deliver on that.