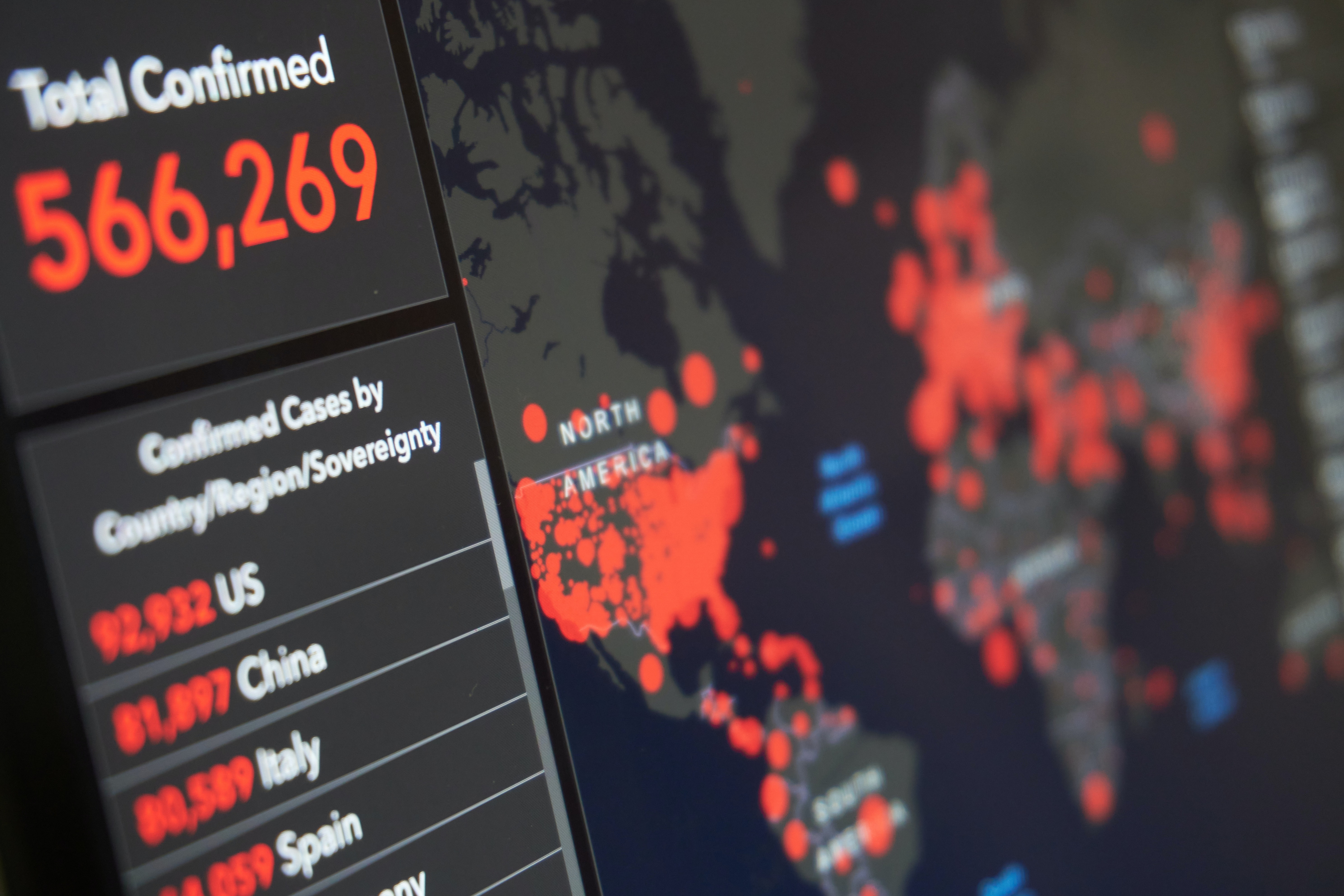 The Omicron surge that originated in Botswana and South Africa has swept across the world. This SARS-CoV-2 strain, though seemingly milder, is much more transmissible than previous variants, contributing to extreme case counts, especially in the United States. As a result, the Omicron surge has invigorated political debates surrounding vaccine mandates, school closures, and other public health measures, hence exacerbating regional divisions in political ideology and the COVID-19 burden.

According to a January 12, 2022 article from CNBC, the WHO reports that out of 357,000 cases of COVID-19 reported in the last month, 59% were Omicron cases. In the first week of January, 15 million coronavirus cases were reported, fueled by the Omicron surge, and the United States saw 4.6 million new cases, which was a 73% increase compared to the preceding week. The United States is reporting more cases than other countries, as their 73% increase is more than the 55% global increase in coronavirus cases over the same period.

As for deaths, the CDC reported 844,841 total coronavirus-related deaths over the past month. However, these deaths are mainly caused by the Delta variant, as the omicron variant is significantly less severe and is less likely to cause death as a result.

Scientists from Botswana and South Africa were the first to warn the world of the much more highly transmissible strain of SARS-CoV-2— the Omicron variant. On December 1, 2021, South Africa recorded 8,561 cases, up from the 3,402 reported on November 26th, with the majority of cases in Gauteng Province, home to the city of Johannesburg.

Epidemiologists measure the transmissibility of a virus with a statistic known as the reproductive ratio, or R0. This value approximates the average number of people that will be infected by a single infected person in a completely susceptible population. Scientists estimate that the original SARS-CoV-2 strain had an R0 of about 2.5, whereas the Delta variant that occurred over the summer and early fall of 2021 had an R0 of just under 7. Although the exact R0 for Omicron remains unclear, scientists estimate that it could be as high as 10. For comparison, measles, one of the most contagious diseases known, has an R0 of about 15. Although Omicron is much more transmissible than Delta or the original SARS-CoV-2 strain, it also tends to manifest milder symptoms in patients.

The drastic increase in the number of Omicron cases compared to previous variants is believed to be attributed to its immunity evasion abilities and heightened transmissibility. Early statistics from South Africa seemed to highlight Omicron’s immune system evasion capabilities: around 25% of South Africans were vaccinated against COVID-19, and a large fraction of the population had already been previously infected with SARS-CoV-2 in earlier waves. Despite this, Omicron surged in South Africa, infecting those who were vaccinated and had natural immunity due to infection with Delta or the original SARS-CoV-2 strain.

Although the COVID vaccine does not appear to be highly effective at preventing Omicron infections, the CDC maintains that vaccination is the best public health measure to lower transmission and reduce the likelihood of new variants emerging. Data from Pfizer suggests that while two doses of the vaccine offers protection against severe disease caused by Omicron, receiving a third booster shot offers a significant level of protection against severe disease, improving the prognosis of those infected with Omicron. The CDC recommends that everyone ages 16 years and older receive a booster shot five months after completing their Pfizer-BioNTech primary series, 6 months after completing their Moderna primary series, or 2 months after the initial J&J/Janssen vaccine. According to Paul Bieniasz, a virologist at Rockefeller University, the booster shot supercharges neutralizing-antibody levels, which provides a prevention measure against Omicron’s immune evasion capabilities.

Different countries across the world have responded to the Omicron surge in many different ways. Israel, for instance, is offering its citizens the opportunity to receive a fourth vaccination shot as part of its method to counter the surge through vaccination. In 2021, Israel was the first country to offer citizens a booster shot, and previously, it led the world in vaccine rollout pace.

On the other hand, countries like the Netherlands and Austria imposed nationwide lockdowns in December 2021. All non-essential businesses in the Netherlands were shut until January 14th, 2022 while schools remained closed until January 9th. Recently, Dutch Prime Minister Mark Rutte announced the reopening of stores, hairdressers, and gyms, partially lifting the lockdown as record numbers of new COVID-19 cases arose in the country. On January 14th, the Netherlands hit a record high of more than 35,000 infections in 24 hours despite the lockdown, which bans all public gatherings.

In Asian countries like Japan and Thailand, the Omicron surge led to tighter government-imposed entry requirements. Japan, for instance, has banned most travel into the country, whereas Thailand has required all foreigners to quarantine.

In the United States, regional variations in population density, political ideology, and the burden of Omicron on the medical system have led to a wide variety of approaches among state governments against Omicron. As a result, many rigorous debates have arisen regarding the constitutionality and ethicality of mask mandates, vaccine mandates, occupational health and safety requirements, and school closures, among others. Many heavily-Democratic, or Democratic-leaning (“blue” states) like Washington, Oregon, California, Illinois, New York, Massachusetts, Maryland, New Jersey, Connecticut, and Maine have passed statewide vaccine mandates for specific private-sector businesses. On the other hand, heavily-Republican or Republican-leaning (“red” states) like Texas, Arizona, Florida, Oklahoma, Montana, Idaho, Indiana, and South Carolina have passed state laws prohibiting localities from implementing vaccine mandates. A handful of other states, including Nevada, Utah, Minnesota, Georgia, Pennsylvania, Ohio, Virginia, and North Carolina have not passed statewide vaccine mandates. The debate regarding vaccine mandates follows the hotly contested mask mandate debate that dominated the news prior to the rollout of the vaccine. However, only Washington, Oregon, California, New Mexico, Illinois, New York, Nevada, Connecticut, and Rhode Island continue to have some form of statewide mask mandate, yet some states differ in requirements for vaccinated individuals.

Not only has the Omicron surge caused a strain on public health, but it also has negative implications for the economy, education, and overall mental health.

Economically, the Omicron surge has slowed recovery, especially in the United States. Since taking office, the Biden Administration has had to grapple with inflation, product shortages, and labor market tumult that were caused by the COVID pandemic. In September 2021, the US saw the highest level of inflation in 13 years and the smallest job growth since January 2021. But with the Omicron surge, the economic recovery is even more negatively impacted. Effects of this include major airlines canceling thousands of flights, public transit systems experiencing staffing shortages, and large corporations putting on hold their return-to-office plans.

B. Risks of Indifference

As Omicron cases continue to surge, pandemic fatigue in the United States has also been worsening. As the US enters the third year of the COVID pandemic, a sense of inevitability has drained much of the American populace, resulting in disruption fatigue, emotional exhaustion and skepticism about public health information. While the push to return back to normal life becomes stronger, many well-intentioned individuals find it hard to keep up with the ever-evolving push to implement new public health safety measures addressing Omicron.

Aside from statewide vaccine mandates, the Biden Administration sought to enforce a nationwide occupational vaccine mandate through the Occupational Safety and Health Administration (OSHA). This mandate would require workers at businesses with 100 or more employees to be vaccinated or submit weekly negative COVID-19 tests if they opt not to. However, the Supreme Court blocked the OSHA vaccine mandate from taking effect. The court argued that OSHA lacked the authority under the law to impose such a sweeping policy without congressional approval. However, the court allowed the vaccine mandate to apply for medical facilities that are supported by Medicare or Medicaid.

Another point of political polarization lies in school closures. School closures remain highly controversial, with some claiming that virtual learning is necessary to overcome classroom transmission and others arguing that the detrimental impacts of virtual learning on student education is far worse. Currently, the Omicron surge is triggering many school closures across the country, mirroring that of Delta and the original SARS-CoV-2 variant. In the week of January 10th, 2022, 6,003 schools across the country were actively disrupted (not offering in-person education). Most school closures affected the Northeast, with 351 school disruptions in the Newark Public School District in Essex County, New Jersey. These disruptions in classroom education have not only exacerbated learning loss in students, but have contributed to an escalating child mental health crisis in the US. Additionally, an analysis conducted by Barron’s estimated that school closures could cost the US economy at least $700 billion in lost productivity.

After sweeping through South Africa, the Omicron variant of COVID-19 made its way across the world. In this brief, we focused on examining the impact of the Omicron surge on the United States’ economy, education system, and mental health. Additionally, we explored various contentious debates spurred by the COVID pandemic and Omicron surge, such as vaccine mandates, mask mandates, and school closures. We noticed that regional differences in political polarization and political ideologies were strongly intertwined with the handling of Omicron, and we concluded that the impact of Omicron far exceeds solely being a public health burden.