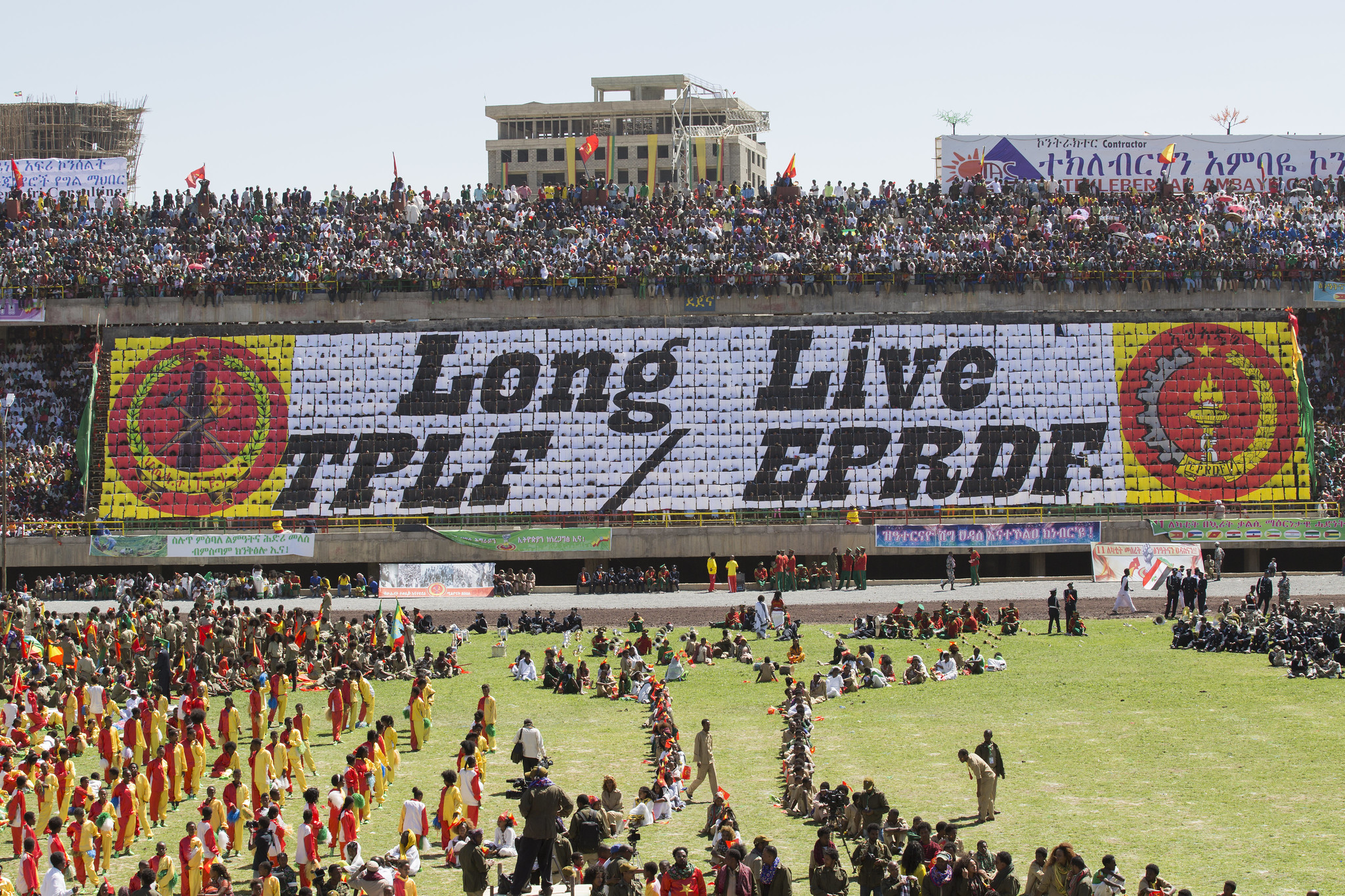 This brief analyzes the current conflict between Ethiopia and Tigray. It covers the history of relations between the Ethiopian federal government, Tigray, and Eritrea. It then breaks down the current situation including changes in Ethiopian politics and claims of genocide.

History of the Ethiopian Empire

Ethnic and political strife in Ethiopia has been a prevalent issue for decades. The beginning of the current conflict between the Ethiopian government and the northern Tigray region traces back to the end of the Ethiopian Empire in the early 1970s. At the time, Ethiopia, an empire of ethically diverse conquered nations, was ruled by Emperor Haile Selassie. However, “the monarchy gradually lost its credibility” as it failed to implement significant land reforms and mitigate the conflicts in the northern region of Eritrea, which was fighting for independence at the time. The failure to alleviate these issues impacted people of lower-economic backgrounds the most, which “helped to fuel Marxist-Leninist aspirations.” As such, with the aid of the Soviet Union, the Derg military junta, led by Colonel Mengistu Haile Mariam, ousted Selassie in 1974 and imposed a socialist rule on the country.

Following the Socialist Revolution in 1974, Mengistu, now military dictator of Ethiopia, ruled the country for more than a decade. His time in power was characterized as the “Red Terror,” in which “excessive violence was used to terrify the population and eliminate dissent.” Reportedly tens of thousands were will killed, with the worst of the abuse occurring in the northern region of Tigray and Eritrea, with both regions leading separate resistance efforts as the Tigray People’s Liberation Front (TPLF) and the Eritrean People’s Liberation Front (EPLF). The Socialist Ethiopian government attempted to gain full control over the region by destroying the social and economic base of the TPLF but ultimately failed once the EPLF began to coordinate its own attacks with the TPLF. The TPLF joined with other resistance efforts in the nation to create the joint coalition of the Ethiopian People’s Revolutionary Democratic Front (EPRDF), which would lead a successful military campaign in 1991 that would remove the socialist party from power.

Establishment of the EPRDF

After the removal of Mingustu from power, the EPRDF became the reigning governmental body of Ethiopia and Eritrea was finally given independence in 1993. In the phase of restructuring, the EPRDF promised the Ethiopian people, who have suffered for decades under oppressive rule, a democratic and balanced government. Nevertheless, the EPRDF largely “remained in power using the same instruments of military force that brought it to power.” As such, the EPRDF has been engaged in gross violation of human and democratic rights, which includes the mass repression and abuse of protestors across the nation. Protests against the TPLF lead EPRDF peaked in 2018, resulting in the resignation of then Prime Minister Hailemariam Desalegn. Finally realizing that unrest within the nation will not settle down, the EPRDF began a reform agenda that opened up the political sphere and elected young administrator Abiy Ahmed from the regional state of Oromia as Prime Minister, rather than one from the TPLF.

Current State of the Ethiopian Government

Furthermore, Ahmed brought final peace with Eritrea during his first years. In 1998, war broke out between Eritrea and TPLF-led Ethiopia over the escalating border and economic disputes. Though both parties agreed to a comprehensive agreement under the Algiers Agreement in 2000, tensions heightened as the countries later remobilized troops along the border. As the new leadership, Ahmed unexpectedly announced in 2018 to fully accept the Algiers Agreement and the 2002 UN-backed ruling that awarded disputed territories to Eritrea. For his efforts in preventing another bloody conflict, Ahmed was awarded the 2019 Nobel Peace Prize.

Feeling threatened by Abiy’s policy and personnel decisions, the TPLF held its own regional election in September 2020, defying the federal order to postpone elections due to COVID-19. In response, the central government refused to recognize the election for the Tigray parliament, and instead ruled it illegal. Ethiopian lawmakers subsequently cut funding to the region. Ethiopian elite units were then transported to Eritrea’s capital, Asmara, as part of an effort to “strikeout of existence the TPLF”, according to the former Eritrean Minister of Defense.

Additionally, Tigrayan territory has been disputed by both Ethiopian ethnic groups and Eritrea. The Amhara, one of Ethiopia’s largest ethnic groups, claims Western and Southern parts of Tigray as their own which were lost in 1991 after the TPLF seized control of the country.

Tigrary’s northern territory along the border of Eritrea was also the primary cause of the two-year war in 1998-2000. Hence, Ahmed’s concessions to Eritrea in 2018 and warming relations with the Eritrean president, who is poorly regarded by Tigrayans, have contributed to the regional instability that underlies the current conflict.

In November 2020, Ahmed launched an offensive into Tigray after accusations of a TPLF surprise attack on a federal military base. In August, Tigraryan rebels announced a formal alliance with the Oromo Liberation Army, which the Ethiopian government designates as a terrorist organization along with the TPLF. Further, the TPLF announced a new coalition named the United Front of Ethiopian Federalist and Confederalist Forces, uniting several rebel groups in opposition to Ahmed.

The current state of Ethiopia is fraught, with the country on the verge of being fractured beyond repair. The Ethiopian government recently arrested over 1,000 individuals due to reported links to the TPLF (Tigrayan People’s Liberation Front), which will likely further exacerbate the food shortage in the country. At least 34 of the 1,000 arrested are connected to UN humanitarian initiatives in the region. Tigray is experiencing an extreme hunger crisis, with 400,000 people in the Tigray region experiencing “famine-like conditions”, and many of the 6 million in the region needing humanitarian aid. The Patriarch of the Ethiopian Orthodox Church, His Holiness Abune Matthias, recently argued that genocide is being committed in his home region of Tigray. Matthias also stated that he felt as though his "mouth had been sealed, unable to speak from fear", due to the likelihood of punishment by the Ethiopian government, currently led by Abiy Ahmed. The conflict has displaced millions of Tigrayans and ignited protests across the world. With fighting continuing along ethnic lines, the situation in Ethiopia will likely continue to create even more refugees and devolve into even more conflict.

Benevolent actors in the international community should hold two goals in Ethiopia: first, the immediate de-escalation of conflict and termination of human rights abuses; second, the creation of a durable peace deal. Present directions, however, are likely to have the opposite effect.

Despite only being successful in a mere 5 of 115 use-cases, the U.S. and EU have defaulted to their typical response to foreign internal conflicts: sanctions. The U.S. has particularly targeted Eritrea for its military assistance to Ahmed’s forces – ironically reminiscent of the role of U.S. arms sales to Saudi Arabia in the Yemeni Civil War. While the Ethiopian-U.S. sanction regime has been deemed “exemplary” by some as “it gives legal exceptions for humanitarian relief delivery,” this view lacks historical context. For example, though sanctions on Venezuela have been repeatedly clarified to not inhibit humanitarian aid, the risks of non-compliance have been too great, leaving a quarter of Venezuelans in dire need of aid. The sanctions placed on Ethiopia run this same risk of doing more harm to already suffering people. Effectively, the flurry of sanctions the Western bloc often defaults to are both wholly hypocritical and risk making a bad situation worse.

To be clear, the U.S. does have a legitimate interest in the security of Ethiopia, as any power vacuum created by the potential abdication of Ahmedcreates the opportunity for China, Russia, and regional powers (i.e., the UAE) to fill in. The U.S. would better support its Ethiopian interests – both humanitarian and geopolitical – by acting as a diplomatic neutral third party to facilitate reliable truces between the two sides. Such an effort, unfortunately, is damned by the internal opposition created by the sanction regime within the Prosperity Party.

Importantly, only a peaceful conclusion to the conflict will hold. A ceasefire created as a result of international pressure or economic and military necessity fails to address the fundamental issues of the conflict and thus will be perennially short-term. Attempts to “bury the enemy” may weaken Tigray, but will also re-entrench their ideological opposition to the Prosperity Party. Indeed, Ahmed’s alleged human rights abuses that plague the conflict give Tigray less, not more, reasons to accept a compromise. Abiy Ahmed will have to concede some amount of power in order to ameliorate the harm done by this conflict – any other attempts at resolution prolong the conflict and risk his overthrow.

But if, and hopefully when, Tigray comes to the table, swift action will be necessary to ensure a lasting deal. Remnants of Ethiopia-Eritrea and Amhara’s possession of western Tigray blur borders and demand geographical specification and clarity of any lasting peace deal. Moreover, temporary truces represent a pause in fighting, not a conclusion to the conflict. In order to bridge the gap, Tigray, the Ahmed regime, and involved international actors should both clarify the timeframe of any agreed-upon truce and create an outline of next steps (i.e., “outlining a sequence for the withdrawal of forces”).

The world has repeatedly watched decades-long political disagreements ravage countries in perpetual civil wars (Somalia, Syria, Yemen, etc.). The steps forward to preventing the same in Ethiopia are not those of aggressive military action and oppressive sanction regimes, but of ones that directly attempt to resolve the root causes of the conflict. In seeking a stable Ethiopia, Ahmed and the Prosperity Party would do good to prioritize promoting political inclusion over demonstrative military success.