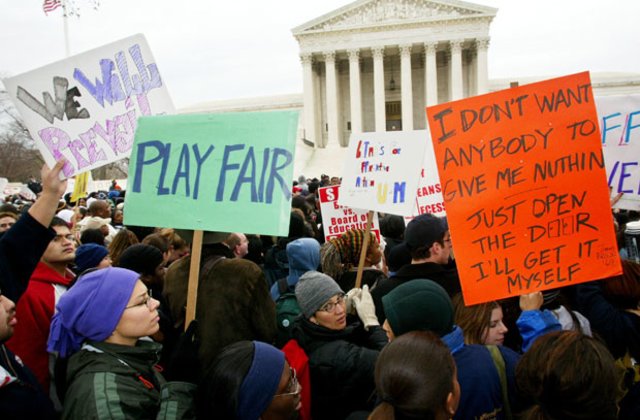 The entire basis of the so-called "American Dream" is that, in the United States of America, no matter what race you are, what economic status you have, what your sexual orientation is, etc., you will have the opportunity to reach success. For as long as America has existed, this statement has consistently proven to be false. Systemic oppression affects racial minorities nationwide, most strikingly in education. Consistently throughout history, people of color have been given second-class citizenship status in education.

Inequality in access to quality education is the first major rift when it comes to college admissions. In attempts to remedy these past discriminations against people of color (POC), affirmative action was implemented in 1961. Affirmative action essentially allows colleges to factor in race as a variable when accepting a student, giving more seats to people of color.  This also made it legal to use racial quotas for underrepresented minority students to provide reparations for minority students. However, racial quotas were outlawed soon after. Affirmative action is a necessary policy to implement in a society where POC are put at such a historical disadvantage. However, it has one major flaw that prevents it from being as effective as we hope it would be.

Affirmative action is a necessary policy for two main reasons: reparations and diversity. Reparations are the idea of providing payment or assistance to a group that has been discriminated against. A good example of reparations is what followed after the horrific events of the Holocaust. When the Allies pressured the German government to compensate for the actions of WWII, the government announced that every Holocaust survivor would receive monthly payments for the rest of their lives. Reparations can come in any form. It could be a direct payment, land grants, etc. One form of reparations people do not think about often is affirmative action. Throughout American history, people of color have been discriminated against in such extreme ways that to this day, people of color still face many challenges that their white counterparts do not. One of these challenges is the fact that, because of a lack of opportunities throughout history, people of color remain some of the poorest people in the United States. Being part of the lower class in the United States closes doors that are only accessible to the rich. Some can’t afford to go to a good school, while others cannot afford a tutor. All of these factors led to colleges being majority white until affirmative action existed.

Because people of color have fewer opportunities, schools need to artificially create those opportunities. This means factoring race into admissions and sometimes giving underrepresented minority students an "edge" or "advantage." However, these are not necessarily advantages. They are just attempts at providing equal opportunity to groups that have been historically robbed of those opportunities.

Another reason why affirmative action is a necessary policy is that it promotes diversity. It is proven that diversity in schools only benefits students. It promotes critical thinking and allows students to look from other perspectives. As explained in the last point, people of color need assistance getting equal opportunities in school admissions. Therefore, without this assistance, student bodies would contain much fewer people of color. A common question is, why is diversity even important? Aside from all the benefits for students themselves, diversity in higher education leads to a diverse professional workforce that can benefit people of color in previously impossible ways. Take politics, for example. Getting involved in politics is something that often requires a college education. Without affirmative action, very few people of color could become politicians. This is essential because politicians are the ones with real power in the United States, and a more diverse political body in government would lead to a government that works and serves everyone, not just select groups of people with privilege.

Despite affirmative action’s many advantages, it has one extremely impactful downfall. Even though affirmative action provides more opportunities, the policy fails to account for discrimination in lower education. What I mean by this is that systemic racism exists everywhere in society, not just in college admissions. It is also prevalent in lower education. Minority communities tend to have public schools that are far worse than public schools in rich, white communities. In addition to that, more often than not, underrepresented minority students cannot afford private school or tutors, etc. This leads to less academic excellence and does not adequately prepare them for higher education. These minority students are given a shot at a good college education but are sometimes not prepared for college due to a subpar lower education. This is the reason why minority students tend to have much higher dropout rates than white students.