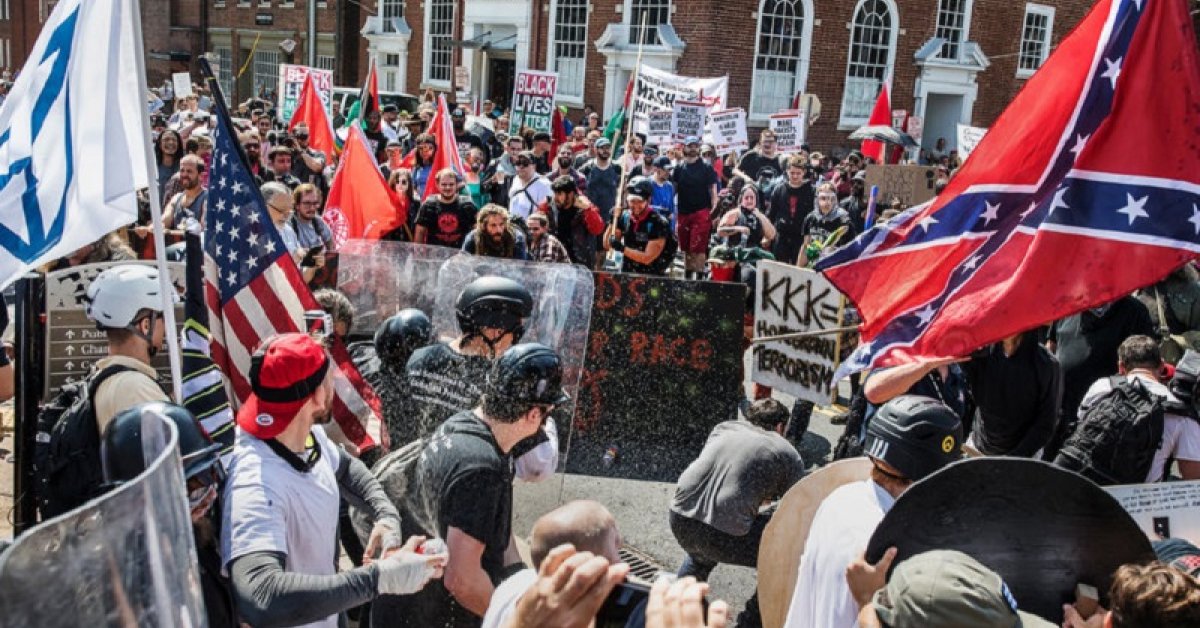 ‘Puppies are good’. A phrase, a concept a vast majority of people should be on board with. Not many people look at that phrase and think, “No! Puppies are the scourge of the earth!” In modern life, this idea has just become widely accepted, normalized. Most people don’t find the need to say it, well, because we all generally agree. After the second World War a similar idea came about at the fall of such regimes as the Third Reich and Facist Italy. ‘Fasicm is bad’ after World War Two that was a phrase everyone agreed upon, no one felt the need to say it unless criticizing an actual facist. People lived in fear that one day fascists would come knocking on their doors and the streets of their neighborhoods would suddenly be taken over by the overwhelming force of the “facist”. That has not always been unfounded.

1939. London, England. Thousands upon thousands of common people, zionists, Irish dockworkers, socialists, and anarchists meet Oswald Mosley and his British Union of Fascists, attempting to prevent Mosley and his brute squad from entering London’s East End. They are fueled by the Italians opposing the facist rule of Bennito Mussolini, they used everything from homemade bombs and baseball bats to shaken - up lemonade bottles and pebbles to attempt to stop the impending “invasion”. The anti-fascists as they would go on to later be called, won. They forced Mosley and his Facist group back along with the police forces protecting them. Later on this so- called battle would be known as the Battle of Cable Street. Their idea was then formed that the only, rather, the best way to stop the heinous wave of facism and white supremacy from continuing to flourish and spread in Europe as it was at the time, is to form an unbreakable, formidable bond between countrymen to literally make it impossible to spread. At the Battle of Cable Street this was a literal wall of men, physically pushing back the fascists with guerilla tactics. What those men did that day was both patriotic and heroic, they actually stopped the violent spread of facism. Although many people disagree with the political viewpoints of those represented on the anti- facist side, most can agree that what they did was patriotic. Those men ( and presumably some women) prevented a scourge, a plague that was rapidly spreading around the world from coming and infecting their people, their neighborhoods. The movement known as ANTIFA comes into the world with breathtaking potential to be a hate fighting group.

ANTIFA has a very admirable and storied history. For decades, they expertly merged with Anti-Nazi groups and movements, in the hopes of ending that supremacy thought. Associates of ANTIFA infiltrated the punk/ rock scene, large parts of which were riddled with white supremacy groups and their recruiters. They then upped their presence in the United States with and emphasis on putting a strangle grip on the emerging neo- nazi groups having uncerimoniusly come about after the fall of the Berlin Wall. They even had a motto, “Where they go, we go.” Implying that anywhere a KKK or supremacy organization goes to recruit, they will be right there. Discrediting everything they say, trying to prevent the impressionable youth of America from going down a treacherous rabbit hole of hate groups. From the 1970’s to the 1990’s those associated with ANTIFA were doing what many southerners call “The Lord’s Work”. They were denying hate and helping love prevail. They were the light at the end of the tunnel for minorities and marginalized groups that felt that they never may escape the grip of facism, anti-sematism or racism. Unfortunately, recently the ANTIFA movement has gone off the rails.

In 2020 members of the ANTIFA movement are best known as terrorists. They committed what many believe to be treason, cordoning off several city blocks in Seattle, Washington, around the capitol, to create their own country. A lawless, cesspool they first named CHAZ (Capitol Hill Autonomous Zone) later renamed CHOP (Capitol Hill Organized Protest), an area the police were barred to enter under threat of armed resistance from the surprisingly well armed, untrained, CHAZ police force, the main group being called “Sentinels” (ironic considering that they set up CHAZ to protest police being overarmed and undertrained), local business owners and residents of the area were forced from their homes and businesses as the building that formerly held them were destroyed and the remnants vandalized. The move quickly caused Washington State's economy to take some major hits, SMEAD Capital pulled out of Seattle, lawsuits are “piling up” according to FOX Business. The stench of the travesty that occurred to the small businesses, homes, and people in the six square block area around the capitol will not be soon forgotten. In this communist utopia fighting racism were garden plots, an attempt to be sustainable, the garden plots were unfortunately separated by race, in fact many parts of this communist wonderland were divided up by race. Blacks and whites not given the same chances, and many videos and reports show white members of CHAZ and ANTIFA protests nationwide being told to apologize for their skin color, verbally berated and taunted for being white, in some cases physically attacked. For a group protesting racial injustice, they clearly seem to misunderstand both what racism is and what racial injustice looks like. They mirror tactics taken by the KKK during the Civil Rights Movement, this time reversed. CNN reports at least two murders,  occurred in the three weeks that CHAZ occupied the six square blocks, along with millions in property damage from IEDs set off, vandalism, sexual assault, rape, burglary, all have been reported to 911 dispatch. However, due to the “Sentinel” police force, no ambulances, fire trucks, or police cars were able to enter the CHAZ to help the victims of these crimes. Additionally the criminals that call Seattle home quickly found the communist habitat to be an easy target. Former CHAZ resident Matthew Ploszaj described the situation like this (via Fox News), “ We are just sitting ducks all day. Now every criminal in the city knows they can come into this area, and they can do anything they want, as long as it isn’t life-threatening. And the police won’t come in to do anything about it.” Plozaj came to this realization after he attempted to call 911 and report a theft from his property and they told him in no certain terms that by no means could they come help him. This CHAZ disaster is a far cry from the late 20th century ANTIFA, working against hate groups to better educate the youth. CHAZ showed Americans what a disaster communism is, what a threat to the American way of life it poses.

The second most well known modern disaster created by members of the ANTIFA movement occurs, and as of the writing of this OP-ED is still occurring. The siege on the federal courthouse in Portland, Oregon. Now, Portland is no stranger to far left sieges on federal property.  Two years ago in the summer of 2018 ANTIFA along with several other left wing groups laid siege to the ICE field office in Portland for two weeks, forcing the office to shut down. Although this protest to disband the Immigrations and Customs Enforcement  wasn’t nearly as violent as the ones occurring now, it still displays a pattern of  severe lack of respect for the American system and everything it stands for.  Now, a review of what’s actually going on today in Portland. The federal courthouse, the same courthouse the rioters and protesters are suing the federal government in, is under violent siege. According to Homeland Security Interim Director Chad Wolf says that the rioters emerge late at night, hijacking completely acceptable, constitutional, and legal protest. As had tragically occurred all across the country, terrorist rioters begin, like a parasite, to invade the peaceful protest, slowly strangling it, making it slowly very violent. As the protest becomes less protest and more riot the federal agents from the Homeland Security Protective Division begin to use dispersal tools, tear gas, loud sirens, riot shields pushing rioters back, etc. however, unfortunately, some peaceful protesters are caught in the mix. Now, this begs the question, “if you are truly a peaceful protester, why are you sticking around at a riot?” These few peaceful protesters caught up in the riot disbursement are harnessed, exploited by the mainstream media to make it seem as though all those being dispersed are peaceful.   As the federal agents risking their lives to protect this courthouse are continually barraged by IEDs, fireworks, eggs, urine, high power lasers, and many other harm causing devices (so far these devices have harmed twenty - eight federal agents, and according to Director Wolf at least three are seriously injured) the new medais and many politicians, namely democratic New York City Congresswomen Alexandria Ocasio-Cortez and California Representative Speaker Nancy Pelosi, have referred to this brave men and women as storm troopers, calling their presence a hostile takeover, as the heroes stand strong and tall protecting the federal courthouse, and symbolically, justice itself. Does the modern ANTIFA fancy themselves as the same ANTIFA that fought at the Battle of Cable Street? Are they really delusional to think that the police protecting the government systems that let them protest are faciest? Republican Congressman of Houston, Texas Frm. Lt. Commander Dan Crenshaw pointed out on his podcast, Hold These Truths, that oftentimes the mob is not unified in demand. He says, “Traditionally when you have protest, they have a demand, the protest until a compromise. When you hear from the people in Portland, you don’t know what they want, they are unified...those who do have a message call for the destruction of modern America.”

This all, tragically, boils down to an undeniable set of circumstances. Eventually these terrorists will need to be controlled. They will need to be arrested and charged for the crimes they have committed. If we, as a country, as a unified people, don’t hold these terrorists accountable, then the chaos may stop for a month, maybe even a year, but sitting on the back burner these terrorists will know they can act without repercussion. They know they can act without reprecession, or at least think they can now, because they know that the democratic party will never acknowledge their existence as a threat, or existence in general.

They know that because they are majority white, the mainstream media will never portray them poorly. They will always be freedom fighters. They cannot and will not change unless they are forced to.

My name is Jeffrey Webb and I am a 16 year old sophomore from Charlotte, NC. I see myself as a conservative libertarian and advocate strongly for bipartisanship, social justice, and “across the board” reform. I hope to both better educate myself and others.