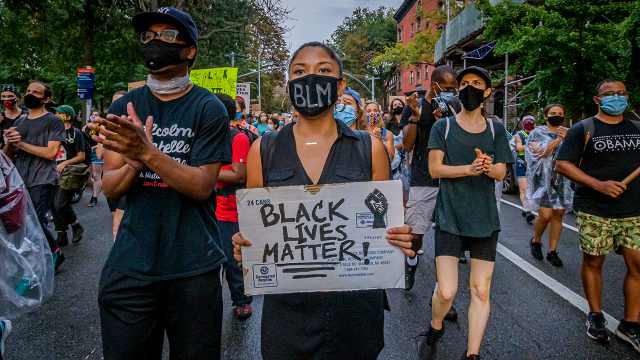 The mainstream media has been providing coverage of Black Lives Matter ‘protests’ ever since the George Floyd incident in Minneapolis. Various cities in America had thousands of people join in the fight against racial inequality and police brutality. Although the entire movement is based on a good cause, it doesn’t present an accurate portrayal of American society.

First, social justice warriors claim that police shootings of black people are very common. This is untrue. According to Statistica, the number of police shootings against whites exceeded those against blacks from 2017-2020. In addition, it is impossible to prove that any of these cases were motivated purely by racism.

One might say that the higher number of shootings against whites is insignificant considering that white people are a population majority. Black Americans make up around 13% of the US population. However, in 2008, they committed around 50% of all homicides. The rate of violent crimes carried out by black people did decrease to around 31% in 2013. However, it remains a very high number for a minority population. Even with such a high crime rate within the black community, BLM protesters only show regard for an unprovable conviction as a large societal problem.

The hidden agenda of the Black Lives Matter organization is widely discussed among Republicans, but largely ignored by Democrats. However, it is not so hidden anymore, as the leaders of BLM have declared their support for socialism and other radical ideas. The only logical explanation for this neglect of growing socialism is that the Democrats are evolving. Progressives such as Alexandria Ocasio-Cortez, Ilhan Omar, and Bernie Sanders are desperately trying to push a socialist agenda into a capitalist nation. While they may have good intentions, the absurdity of their old ideas cannot be ignored.

Their Green New Deal emphasizes a complete elimination of fossil fuels within 10 years. Despite the very few studies presenting the New Deal’s benefits, it will lead to a destruction of our economy. With the fossil fuel industry gone, over a million people who work directly with coal, oil, and gas will be unemployed. Next, the industries that rely on the productions of this industry will be hit hard: car companies, textiles, and farming. This weighs as a major toll on the US and even the world economy for a minor environmental benefit.

Socialism is an old idea that proposes a seemingly fair economic system. In reality, it is not fair at all. This concept stresses the influence of laborers and eliminates the need for proprietors. Simply put, the workers would decide the value of a product and they would own the means of production. This undermines the work done by business owners. Proprietors are the ones who purchase supplies, direct funds, and risk their assets for their business. In the case where a business goes bankrupt, it is not the workers who face a major crisis. Everything the owner invested in is lost. Aside from the corporate aspect, the idea of shared wealth is baffling. One person performs manual labor for 9 hours and receives a certain amount of pay. With shared wealth, they would give a fraction of their money to several people who haven’t done anything.

Socialism fails constantly. That is evident in the Soviet Union, where a power grab happened immediately. Even though socialism/communism exists in places like China and Vietnam, it is yet another example of socialist failure. The government owns everything.

Additionally, Alexandria Ocasio-Cortez strongly advocates a shared wealth economy by means of an increased tax rate on the wealthy. Yet, in June 2019, according to Business Insider, she drew attention to the wages of House Representatives. She stated that salary increases would keep money out of politics. This is either a blatant power grab attempt or an inconsistent economical proposal. The idea of a power grab makes a stronger case, not only regarding Ocasio-Cortez, but House Democrats in general.

Google trends show a fascinating correlation between BLM interest and election years. The trend increases dramatically right before the election and goes back down after. This is attributed to the fact that Democrats publicize their support for the organization on platforms such as Twitter. Liberal media also promote the movement. Yet, one can say that the sole purpose of support for BLM is to appease black voters. Every election year, the trend surges. As soon as the election is over and until the next one, the BLM trend doesn’t come up.

Continuing with the hidden agenda of Black Lives Matter, funding towards the organization is misdirected and questioned. The donation platform is called ActBlue and many conservative commentators note that BLM donations via this site are funneling straight into Democratic campaigns.

Democrat disdain for the BLM sentiment is evident in their legislation or lack thereof. Many cities have prominent black communities. However, Democrat cities such as Baltimore rank high in poverty, crime, and overall quality. Yet, left-wing leaders haven’t done much to change that in 53 years. Chicago is rampant with gun-related homicide within the black community. New York City and Los Angeles have a combined homeless population of over 100,000 people. Democratic politicians, although they widely publicize the BLM movement, don’t really care about its constituents.

A “disruption” of the nuclear family is also advocated for by this group. They want to empower single-parents, who are prevalent in the black community, and their children. This is unnecessary because 42% of single-mothers earn over $40,000. The people who are not a part of this percentage are able to get out of poverty, since 67% of them have a college education. There are plenty of job opportunities with a college degree.

Finally, Black Lives Matter fights for racial equality and against systemic racism. However, systemic racism doesn’t exist in America. Indeed, there are instances of racism. But, the idea that America is based upon and held together by racism is entirely false. Jim Crow laws have been removed for decades. There is no law that discriminates against people based on their race. There is a law that prohibits that: the Civil Rights Act of 1964.

Anyone, regardless of race, gender, or religion, has an opportunity to do what they want. Black people can become the president of the United States, as exemplified by Barack Obama. A Muslim person can become a wealthy business owner (Hamdi Ulukaya- founder, CEO, and chairman of Chobani). Women can also have tremendous influence within the entertainment industry, just like Oprah Winfrey.

A privilege that does exist is wealth. However, if one were to graduate high school, not have kids before 20 years old, and stay away from crime, they are guaranteed a life away from poverty. That is governed by a person’s choices. So, wealth privilege is essentially choice privilege.

Thus, while one should support the sentiment that black lives (and all lives) matter, it is justified to be strictly opposed to the Black Lives Matter organization. They seek things that already exist in America, and they support old and ineffective ideas that are a threat to the current economic system.

“Home.” Coalition For The Homeless, www.coalitionforthehomeless.org/.