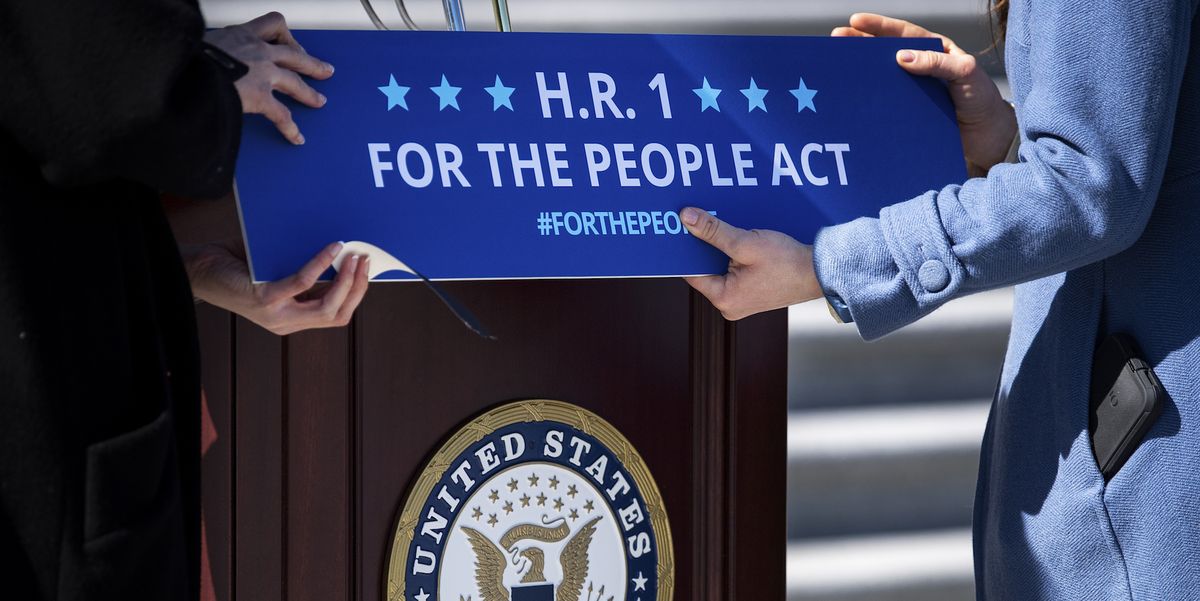 Democracy isn’t Devilish: the parts of HR 1 we can’t compromise on

On March 3rd, the House of Representatives passed the For the People Act, a comprehensive list of the election, campaign financing, and ethics reforms that aim to further expand voting rights, increase transparency, and protect the rights of American voters and the security and integrity of American elections.

It now heads to the Senate where, despite the fact that 67% of Americans strongly or somewhat support the bill -  including 56% of Republicans and 68% of independent voters -  the bill has received vehement criticism by the Senate minority. One Republican Senator even claimed the bill was “written in hell by the devil itself”. It’s clear that despite the large majority of public support, the bill has little chance of reaching the 60 vote requirement without some kind of compromise.

Luckily, the For the People Act, also known as HR 1, has enough depth that even a scaled-down version can still make our democracy more responsive and more representative of its electorate. But to do that, three categories of reform have to stay in the bill - election process reform, redistricting reform, and small donor public funding. Party mudslinging aside, to compromise on any of these would sacrifice the enfranchisement of millions of voters.

To start, The For the People Act has the potential to make some of the most wide-spread voting rights reforms simply by modernizing the election process. That requires the following policies: nationwide early voting, expanded mail-in voting, limits on flawed voter purges, and automatic, online, and same-day registration. These reforms are crucial because they help more people vote more easily.

The Brennan Center for Justice reports that automatic registration alone can register 50 million new voters, and online and same-day registration only adds to that projection. Voters would be automatically enrolled through agencies like the DMV. They can make updates, or re-register easily with online registration, which not only modernizes the election process but decreases inaccuracies and increases election security. With same-day registration voters who aren’t already registered, or who are purged from voter rolls re-register quickly at the polling booth.

The other election process reforms are just as crucial. National early voting would require each state to have 15 days of early voting, at locations that are open for at least 10 hours a day. After all, if Election Day isn’t going to be a holiday, then federal and state governments must provide options for busy Americans who don’t have the time to spend hours in long lines. Mail-in voting expansion is also important. Contrary to the misinformation and lies that were spread about the 2020 election, mail-in voting has existed since the Civil War and is not a source of extraordinary voter fraud. In fact, about 25% of the population voted by mail prior to the 2020 election, without concerns about voter fraud. With HR 1, eligible voters would receive a ballot in the mail with pre-paid postage, ballot tracking measures, and extended return deadlines. HR 1 also expands who can vote with mail-in ballots and dispenses accurate information about the process.

Furthermore, the protection from voter purges counters many efforts to invalidate ballots based on trivial mistakes. Ballots have been thrown out because voters didn’t exactly match their signature, dropped off their ballot at the wrong polling place, mis-marked their envelope, or because they coincidentally have the same name as another voter. More malicious attempts at voter suppressions have removed thousands of ballots or registered voters.  HR 1 will do more to keep registered voters on the voter rolls and will limit voter suppression that occurs through stringent voter ID laws by accepting signed affidavits in the place of discriminatory photo IDs.

Redistricting reform is just as - if not more - important. Partisan gerrymandering has occurred on both sides. Democrats in Maryland have refused to accept a district map that created an extra Republican seat, and Ohio Republicans have drawn districts in a way that gives Democrats 25% of the seats despite the fact that nearly half of the state electorate votes for the left. The For the People Act requires states to contract independent commissions made up of representatives from both parties and independents to draw uniform district maps. Commission members would also be screened for conflict of interests. This measure will group those with a common interest to give them greater voting power and make races more competitive. In short, HR 1 can make sure that elected officials accurately represent their voters, and it gives every voter a fair voice in their elections.

Though it often goes unmentioned in the public conversation, small donor public funding has the potential to drastically increase the power of the average voter. Any donations under $200 to congressional candidates would be matched with a 1:6 ratio. That means if someone donates $10, another $60 of public funds will be matched to the donation, for a $70 total donation. If someone gives $100, the candidate would receive a total of $700. This allows poor and middle-class Americans to compete with the large donations from corporations and the top 1% of the economy.

Public funding already exists for presidential campaigns and local state races. Ronald Reagan even used the presidential public funding system to win in a landslide during his reelection. This measure would combat dark money in politics, and mega-donations from super PACs, corporations, and the top 1% of the economy. Candidates can opt-in to this system and still raise as much money as they would with prior super donors. Plus, it comes at no cost to the average taxpayer. Funding doesn't come from taxes but from the penalties assigned to corporations, like BP or Facebook, for violating federal laws. If corporations don’t break the law enough to generate ample public funding (unlikely), then HR 1 will place a cap on the amount each candidate can possibly earn. Taxpayers will never foot the bill. Small donor public funding is based on a simple principle - elected officials should represent the interests of their voters and constituents, not their mega-donors.

Some conservative groups like the Heritage Foundation argue that these reforms centralize too much power in the federal government and impede on state rights. However, the federal government does have the power to make laws regarding federal elections and the national electorate, including laws about election processes and state positions that impact our national government. Furthermore, it’s ineffective to have different qualifications and processes for voting in each state - there must be standard practices for the electorate, and then states can add further laws that focus on district local laws. Plus, all of the measures explored in this article have been supported by the ACLU  for expanding voter rights and equal voting opportunities, as it is the federal government’s duty to uphold the Bill of Rights.

Most importantly, these reforms benefit all Americans on any side of the aisle. Mail-in and early voting give more opportunities to vote quickly and conveniently especially to people who may work multiple jobs with long hours, attend school, or can’t find childcare. That includes young people and minimum-wage workers, single parents, and especially people of color in both parties. It also affects voters who live in rural areas, like Native Americans on reserves and farmers. Small donor funding amplifies poor and middle-class voter donations and especially supports candidates who are young, female, people of color, LGBTQ, or disabled, who historically get less super PAC funding or large donations. This could change the congressional makeup to reflect the diversity of the American melting pot.

This author contends that the entire bill is a lifeline for democratic institutions. There’s nothing devilish about it. In fact, the more parts of this bill that make it into law, the more representative and accountable our republic will likely be. But every voter must call their Senator and emphasize the 3 things our republic can’t compromise on: 1) electoral process reforms, 2) redistricting reform, and 3) small donor public funding. These are policies rooted in bipartisan research and timeless principles of democracy. To pass this bill will require the country to recognize and amplify the true source of political power and the basis of representative government - we the people.

Folley, Aris. “Mike Lee Says 'For the People' Voting Bill Is 'as If Written in Hell by the Devil Himself'.” TheHill, The Hill, 10 Mar. 2021, thehill.com/homenews/state-watch/542559-mike-lee-condemns-for-the-people-voting-bill-says-its-as-if-written-in.

Penumaka, Evangel. “The For the People Act Is Popular, Pass It Right Away.” Crooked Media, Crooked Media, 24 Feb. 2021, crooked.com/articles/for-the-people-act/.