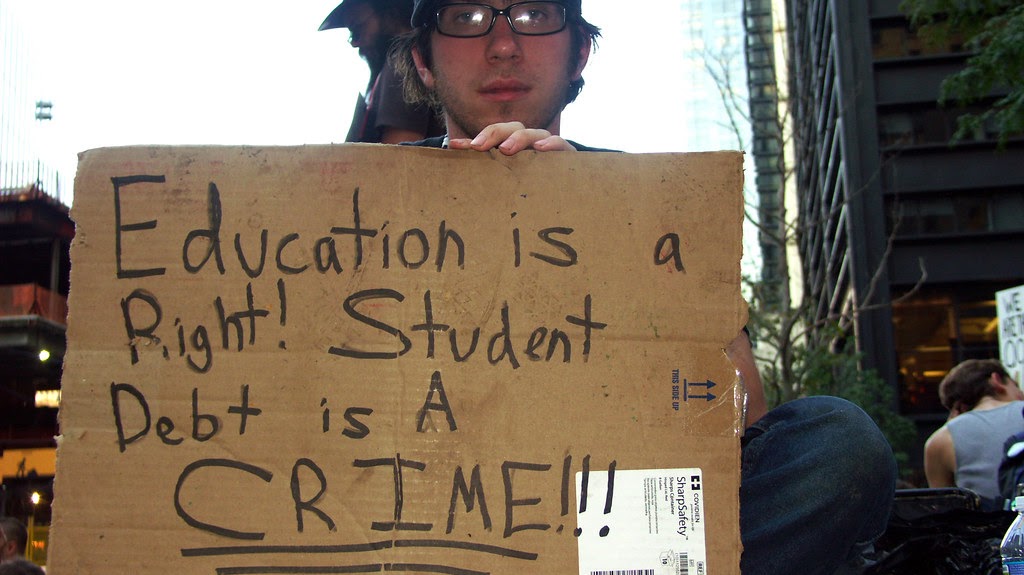 Recently there has been a lot of talk about the “student debt crisis”. Recently Bernie Sanders and Elizabeth Warren have proposed forgiving student debt. Naturally, this is somewhat popular and garnering a lot of attention because of course free stuff is fun and having the government give out free stuff is also very controversial. The idea of student loans forgiveness is very complicated as it's important to understand what caused them, the moral and economic hazards, and what other solutions are.

The complete student-loan market is $1.6 trillion spread over 45 million borrowers. In terms of broader household debt, student loans are a relatively small piece of the pie at only 10% of national household debt. When looking at student debt it is also important to note that not all student debt is equal. If borrowing $75,000 helps you graduate medical school, that debt increases your earnings even after it’s paid off. But borrowing against a degree in social work, where median earnings are less than $50,000, is much riskier. US senator’s Elizabeth Warren and Bernie Sanders have introduced and campaigned on the idea of forgiving student debt - at least for some of us — and that college should be free. Unfortunately, free stuff is very expensive. Elizabeth Warren admits her plans would cost $1.2 trillion over ten years.

Before you pick a side on this issue it is important to understand what caused college to become so expensive. The Higher Education Act of 1965 directed taxpayer dollars to low-interest loans for students pursuing a college education. Though the program started small, today roughly 90% of all student loans are issued by the government. “The U.S. is in a class of its own,” in terms of education spending says the director for education and skills at the Organization for Economic Cooperation and Development (OECD) and statistician Andreas Schleicher “Spending per student is exorbitant, and it has virtually no relationship to the value that students could possibly get in exchange”. Federal loans have made tuition far more expensive. With the current system universities get paid up front, so whether students graduate, drop out, or default on the loan it doesn’t matter to the university. Departing students are easily replaced. Confident that students have access to cheap cash (which can be expensive in the long run) from the government or banks , colleges have no incentive to manage the prices of housing, tuition, fees, and meals. This is one of the main reasons why college has grown in price so much, while the quality of that education has stagnated or declined.

For Bernie Sanders and Elizabeth Warren the solution to this problem is forgiving students debt. A major problem with the blanket student loan forgiveness concept is that it does solve the real problem of rising tuition. Once existing debt is forgiven the debt meter will begin to spin once again. Will the government bailout those students as well? If not, the plan would create a generation of student loan lottery winners, with losers on either side. Those who worked to pay back their loans will be punished, people with future loans would get nothing and those who decided to rack up debt are rewarded. At a campaign rally Elizabeth Warren was asked about her plan. A father, who worked two jobs so his daughter could graduate college with no debt, asked, “Am I going to get my money back?” Warren’s reply: “Of course not.” The father drove home his point by saying “My buddy had fun, bought a car, went on vacations. I saved my money. He made more than I did. ... We did the right thing, and we get screwed.” This point put a dent in the Warren’s and Sanders proposals that everyone noticed except for them. One of the biggest moral hazards with Warren’s plan is that it punishes people who put their college degrees to good use, to earn more money. In Warren’s plan, households with an income under $100,000 would have up to $50,000 in student loan debt forgiven, but forgiveness would be phased out for households who earn between $100,000 and $250,000. Finally, households with incomes higher than $250,000 will have no loans excused. Due to the way this plan is set up, a family with two doctors and higher earnings would be left to fend for themselves. This is despite the fact they probably spent 8+ years at a more expensive university so they could learn to save people’s lives. On the opposite end someone who borrowed $150,000 for a less useful degree would see some of their loans forgiven. How is that fair? Pardoning student’s debt gives the wrong incentives and creates moral hazards. When politicians decide to forgive debt, they give people an incentive to borrow more. For the same reason that people’s menu choices change when someone else is paying, so too would students’ and parents’ behaviors change if someone else had to pay the tuition bill. Too many students already choose majors that have little help to them. Imagine how much worse this would be when students don’t have to pay back the money they borrow for their degrees.

Now what’s a better solution? There are two main solutions. Having universities give loans and Income share agreements (ISA’s). The first solution is having schools give loans to students. First and foremost, lending to students gives schools skin in the game and an incentive to make sure students graduate and lower costs. Hillsdale college in Michigan has been one of the first to try this solution. Hillsdale College Indirectly lends to its students through private funds instead of through the government. Since starting this Hillsdale’s default rate on its loans have dropped to a mere 1.7 percent. This is far below the Default rate on government loans, currently around 20% percent. Other schools have gone further than Hillsdale as to not allow students to receive federal financial aid so they can remain free of federal intrusion into their affairs. The second solution is an Income share agreement proposed by economist Milton Friedman. In an ISA, students are provided a fixed amount of money by a company or investor. In exchange students agree to pay back a defined percentage of their income over a period. As a student's income increases, both the investor and student reap the benefit. In the deal students can buy out the loan to exit out of the agreement and have an income exemption (where students are exempted from paying the investor back if their income falls below a certain threshold). Students who enter an ISA are relieved from tuition, fees, and living expenses, enabling them to perform better in school with a reduced obligation to work during the academic year. In general ISA’s not only help lower tuition costs but also create better, smarter pupils as students can focus on their studies and not their income.

In conclusion relieving students’ debt causes unfair paybacks, bad incentives and creates many moral hazards. The reality of forgiving loans is forcing taxpayers to pay for the financial burdens of others. Not only that, Pardoning student’s debt also doesn’t solve the problem and essentially tries to bring more government interference to fix a problem caused by the government.