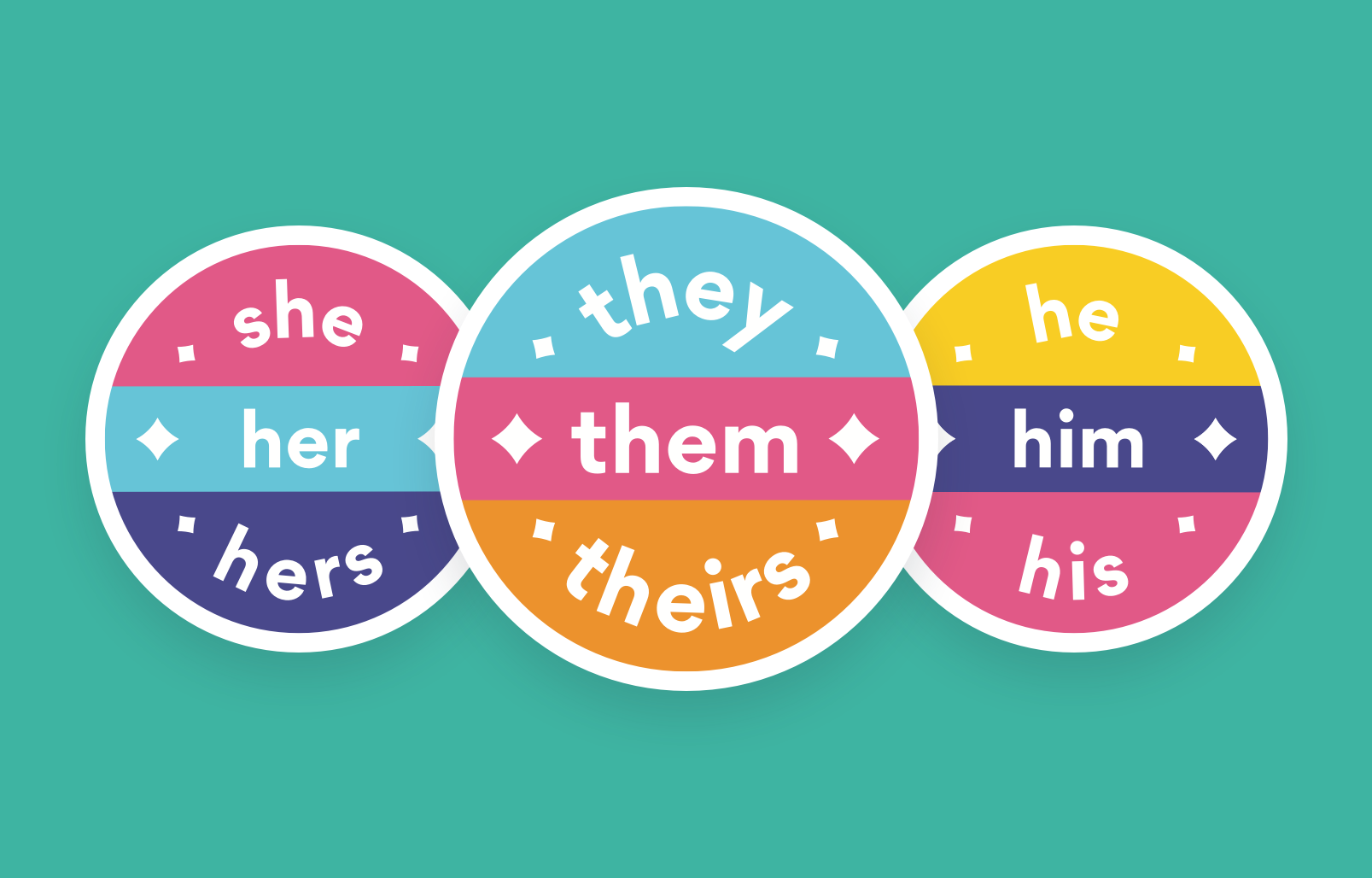 To start with the basics, let’s introduce third person pronouns. Third person pronouns are a set of words that describe a person’s body or sex. Sex is the only feasible prospect that should be connected to personal pronouns. It is the anchor by which people associate the connection between language and individuals, simply because biological sex cannot change. It’s what people have been taught since their early days of schooling and it exists independent of people’s minds. Being straightforward, why are people striving to change the default and modify common sense into radicalism? Unfortunately, many want to feel included and have decided that modifying pronouns is a way to promote gender inclusion.

At the cost of their comfort, however, underlies considerable issues to why the use of preferred pronouns should not be obligatory.

What is language? Crack open any dictionary and compare the definitions of language. It varies from phrase to phrase but its end goal describes language as a way to communicate and to unite people. Preferred pronouns do not fit that criteria because it is very subjective. Many could argue that making language subjective (specifically pronouns) could be a helping hand to include all genders, regardless of their sexual orientation. However, gendered pronouns have been embedded in Western Language, and to say language is the root of segregation for people having an identity crisis is simply not true. English is the most commonly spoken language in the U.S., but for the sake of including all languages, let’s think about Spanish, French, etc. Spanish clearly distinguishes the difference between masculine and feminine by using él and ella, ellos and ellas. Very similarly, French uses lui and ellas to identify pronouns; the same can be applied to every other language. With the exception of Sweden, which recently dropped a new pronoun (hen), every language would have to alter its pronouns that have been practical since the 13th century. Dropping new bombs in the world of pronouns for all the 6,500 languages in the world would result in redundant confusion, unnecessary identity catastrophe, and an instilled fear of using the “wrong pronouns.” So, why is it a bad idea to tweak something objective like language into something subjective?

Peter Vlaming, a Virginia teacher who refused to use transgender pronouns, was fired from his school in 2019. Nicholas Meriwether, a humanities professor, was unlawfully punished for refusing to refer to students using preferred pronouns in 2018. Their reasoning behind declining their male students’ request to be called “she/her” was due to a violation of their religious rights. The First Amendment warrants and protects freedom concerning one’s religion, including the freedom of expression by “prohibiting Congress from restricting the press or the rights of individuals to speak freely” (Cornell). While schools’ pronoun policies are constitutional, so are the teachers’ freedom of expression. As Christians, Meriwether and Peter believe that sex is both binary and rigid. Thinking otherwise would go against their God’s creation and the texts of the Bible, hence against everything their faith stands for. It is obscene for people of faith to be demanded to pick between the option of being dismissed from their career or to pursue their religious beliefs and abide by the Bible. Justice Robert Jackson, a former associate of the Supreme Court, quoted “If there is any fixed star in our constitutional constellation, it is that no official, high or petty, can prescribe what shall be orthodox in politics, religion, or other matters of opinion. The state can’t force people to say things they don’t believe.” Transgender people, non-binary people, the state, not even society can force people of religious idelogies to use “ze, co, thon” pronouns. As the First Amendment protects non-binary people to have the freedom of being called what they prefer, it also protects the rights of others such as Meriweth, Vlaming, and many others who were unlawfully punished. In countries such as Canada, new bills are being passed to ensure jail time for those who choose not to comply with using preferred pronouns. In 2016, Bill C-16 took away Canadians’ freedom of speech from the Section 1 Constitutional Act 1982, which is analogous to the First Amendment. Bill C-16 proclaims that the court could potentially send individuals to jail if they do not issue out an apology or comply further with using preferred pronouns. In 2017, California governor Jerry Brown signed legislation threatening jail time for healthcare professionals who willfully decline to use preferred pronouns. It is irrational that what used to be considered common courtesy now has criminal consequences, in addition to forcing one into apologizing for one’s religious beliefs.

Most children begin demonstrating and expressing their gender identity at around 3-5 years old. They recognize and label stereotypical gender groups by masculine or feminine. It’s important to keep in mind that children take in everything they are taught from a young age and will most likely utilize them in later years. Around 3-5 years of age is when most parents will start sending their children to preschool or kindergarten, where they will be taught about pronouns. Children simply can’t pick their gender. If a teacher has to explain to a young girl that she can be a boy, then not only is that lying, but it is incredibly damaging to the child as well. One of the premises of the transgender movement is that human minds are completely malleable, that men are not really men and women are not really women, that they can become any gender they choose to be anytime. Whereas adults are able to make up their minds as they acquire more experience/knowledge on the matter, children are exceptionally malleable and yield to what society tells them. When a young girl learns that she can choose any gender she’d like, she may grow up confused about her identity and conform to what society expects of her. Preferred pronouns result in children who are confused about their identity and can lead to significant damage such as gender dysmorphia. Gender dysmorphia is further accompanied by anxiety, signs of depression, and self harm. Children should not be exposed to these harmful effects until they have matured and have the ability to think for themselves. Although preferred pronouns might not be a direct link to gender dysmorphia, it allows children to be uncomfortable with their body before they’ve hit puberty and authorizes them to be confused about their biology and gender. Once more, children can’t simply pick their gender, just as children can’t pick out their name. Later along the line, they can legally change their name and gender, but before that time comes, teachers and parents should uphold objective gendered pronouns to restrain from unnecessary disorientation.

Americans must not be forced to use language against their will or be prepared to take the consequences. Take, for example, the use of obligatory pronouns. On many occasions, people have stood up for their First Amendment rights and have inputted controversial opinions that have cost them their businesses and jobs. Preferred pronouns are no longer common courtesy; they come with criminal consequences along with a steep price to pay for simply slipping out the wrong words. In most contexts, many Americans would be content with referring to anyone using preferred pronouns if asked. However, mandatory pronouns directly violate free speech and freedom of expression if one is involuntarily mandated to say it. Compelled speech does not equate free speech. Furthermore, demanded pronouns not only undermine language, it sets young children up for unhealthy habits and, potentially, identity crises from a young age. The world of preferred pronouns is an inescapable house of mirrors that many are not willing to undertake.

Culture. “Why You Shouldn't Use Transgender Pronouns.” The Federalist, 21 Oct. 2016, https://thefederalist.com/2016/10/18/shouldnt-use-transgender-pronouns/.

Hanna, Alex. “Actually, We Should Not All Use They/Them Pronouns.” Scientific American Blog Network, Scientific American, 3 May 2019, https://blogs.scientificamerican.com/voices/actually-we-should-not-all-use-they-them-pronouns/.