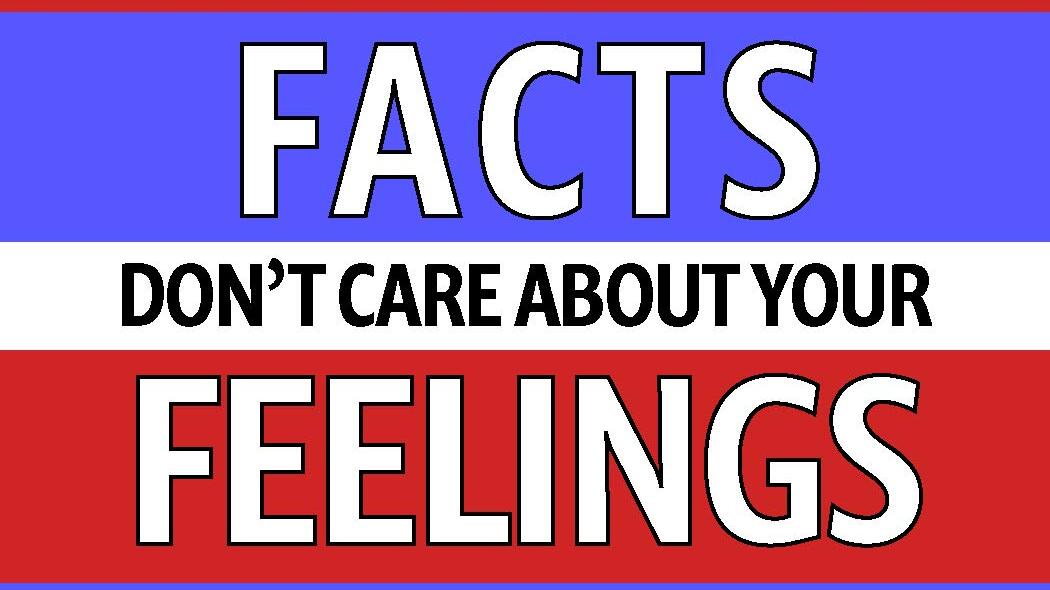 As the gap between liberalism and conservatism continues to widen, rhetoric used by both belief systems has become increasingly pointed. Rather than using their rhetoric to defend their beliefs, most of it has been reduced to childish attacks. Notably on the conservative side, the idea of “facts over feelings” has been used to attack liberals and the liberal agenda.
While this term may present itself in a variety of ways, the idea behind it remains the same — your feelings don’t matter, facts do. And, even though statistics are measurable while feelings are not, “facts over feelings” expresses the idea that one’s feelings should never take precedent over facts in a debate. This phrase in many ways is correct; facts should be used to supplement your stance in a debate. Facts should be used to shape your political beliefs. However, “facts over feelings” has been used to dictate and refute emotional response to United States policy, our social reality, and things of that accord. This is where “facts over feelings” has raised eyebrows among the liberal community.

This term has most notably come into prominence after conservative political columnist Ben Shapiro’s usage of the term “Facts don’t care about your feelings” during his college tours, where he often used this term in conversation with young liberals. Shapiro, who has become one of the faces of modern conservatism as it stands, has made this aphorism into a conservative doctrine.

While the aphorism has pushed American’s to critically think about the legitimacy of the information they consume, it has reduced the complexity of American politics and the American experience to just that — a matter of legitimacy. It has reduced the American experience to only what appears in statistics, theory, and data. This is where “facts over feelings” becomes a dangerous political ideology.

The idea that feelings and lived experiences are a waste in comparison to concrete facts has posed itself as one of the most faulty ideas in America’s belief system. “Facts over feelings” is dehumanizing. Our politicians are human. Voters are human. Politics are human. Our politicians feel, voters feel, politics — especially the social aspects — feel. And, true to our nation’s foundation that’s built on Enlightenment ideals that encourage free thought and expression, our nation is one that chases feelings — particularly, feelings of security, liberty, patriotism, and happiness. Our nation is chasing humanity. Particularly, humanity that manifests itself as freedom — especially now, where centuries of inequity and social restraint have amounted to a political scene more tumultuous than anything many have seen in generations.

But, how do we chase humanity? How do we chase those Enlightenment ideals that we built our nation off of? Is it reform based solely off of statistics, where the people who are suffering at the hands of centuries of dehumanization are underrepresented? Think about it: due to census underrepresentation, we already don’t know the number of people that we need to survey in the first place. How are we going to ensure that the experiences of underrepresented minority Americans are portrayed accurately? How are we going to understand the implications of social policies on a human level?

This is where understanding a person’s feelings could be extremely valuable. But, the “facts over feelings” rhetoric threatened this understanding. And, because of this belief that policy and reform are separated from feelings and experiences, the United States has failed at achieving the reform that they have been chasing for years. Yes, womxn, people of color, and sexual minorities are protected broadly by the 14th Amendment. But, do womxn feel safe walking down the street at night? Do women feel like they are not undermined by their male peers? Do people of color feel like they are safe when interacting with law enforcement? Do people of color feel like America wants them to relish the freedom possessed by their white counterparts? Do LGBTQ+ youth feel safe in schools? Do these people feel protected by the U.S. Constitution? Until we understand these people’s feelings, we cannot truly progress as a nation.

This lack of progress is one that conservatives remain apathetic to, as true to their M.O.. But, the ignorance of feelings and human nature in the government has yielded other consequences. This is true especially when considering the way our nation currently approaches turmoil and discontent. While our Constitution encourages peaceful protest, notable protests as of late have not been entirely peaceful. For example, the events of this past summer after the death of George Floyd exemplify what centuries of pent-up, ignored frustration can create: a movement that in part has had to resort to violence, and rightfully so. Along with this, conservatives only focus on the riots, not the peaceful protests. This focus is most apparent in current conservative comparisons of the #BlackLivesMatter protests to the recent act of terrorism at the Capitol by Trump supporters. The tantrum thrown by white supremacists and Trump supporters could be attributed to their bottled-up frustration with the result of the election. But, it’s important to note that their feelings of dissatisfaction over things like the presence of immigrants and minorities (feelings that they falsely described as “patriotism”) have been coddled by a federal administration that shares that same sense of “patriotism.” This same federal administration has blindly affirmed feelings that push a violent agenda in favor of looking for concrete evidence of the threat that these ideals pose.

As America makes steps toward peace, liberty, and freedom, we must consider what to do with facts and feelings. The United States cannot continue to take this dehumanizing approach to policy if they truly want to progress and improve. Our government must begin to recognize that while facts will always be true, facts do not invalidate the importance of feelings and humanity. Also, our government must begin to take active steps to understand people’s feelings and humanity. If they want to quantify these feelings, they must work harder to statistically represent everyone. And, above all, people — liberal or conservative, citizen or politician alike — must make a better effort to understand human nature. We are not simply statistics, we are human.