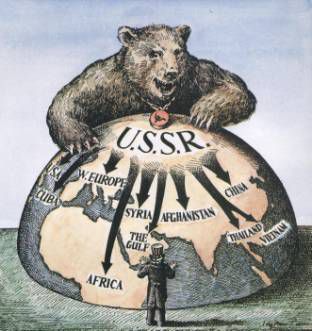 George Kennan once wrote that he felt “like one who has inadvertently loosened a large boulder from the top of a cliff and now helplessly witnesses its path of destruction in the valley below, shuddering and wincing at each successive glimpse of disaster.” This boulder was containment–the American foreign policy that defined the Cold War.

After graduating from Princeton in 1925, Kennan was accepted to the foreign service. He spent the next several years as a diplomat in Geneva, Hamburg, Tallinn, Riga, and Berlin. In Berlin, the State Department funded his education in Russian Studies at the University of Berlin’s Seminar Für Orientalische Sprachen. There, he was taught primarily by Russian émigrés who were decidedly hostile towards the Soviet Union and its Marxist experiment, while reminiscing on the virtues of Tsarist Russia and traditional Russian culture and society. Kennan, who already had a deep appreciation for the great Russian writers Tolstoy and Dostoevsky, and had found his reading of Marx unpersuasive, was receptive to this message.  Thus began a lifelong anti-communism. He later wrote that “I was never able to accept or condone the stony-hearted fanaticism that was prepared to condemn to the loss of all civil rights, to ignominy, persecution, and ‘liquidation of class’ entire great bodies of people–the ‘bourgeoisie’ and large portions of the peasantry, the majority, of the Russian population–for no other reason than that their members had been born into certain stations in life”. Throughout the 1930’s Kennan moved throughout Europe, developing an antipathy towards Nazism as well. While in Nazi-allied Finland, he wrote, “it was hard to think that another place where life was decent and healthy and cheerful had succumbed to the darkness and misery brought over the world by small-souled and ruthless men who control the engines of destruction.” Kennan was in Berlin when Germany declared war on the United States. He, along with the rest of the embassy staff, was arrested and sent to an internment camp, where they were kept for six months before being allowed to return to the United States. Shortly thereafter he returned to Europe, where he did short stints in Lisbon and London before being moved to Moscow. While at home prominent journalists like Walter Lippman were advocating for accommodation with the USSR, Kennan saw things differently. Following the D-Day landings, Kennan wrote, “We no longer owed them [the USSR] anything, after all (if indeed we ever had). The second front had been established… We in the West had a perfect right to divest ourselves of responsibility for further Soviet military operations conducted in the spirit of, and with the implications of, the Soviet denial of support for the Warsaw uprising.” Put simply, Kennan believed that American and Soviet interests were incompatible and the alliance could not be sustained once the Germans were defeated. Following VE Day, there were major questions over what would become of Eastern Europe, including Poland, for whom the war was ostensibly started. The partitioning of Germany was another major issue. Kennan believed it was hopeless to pretend that President Truman could influence events in Soviet-occupied Eastern Europe and East Germany. Instead, he advised that the United States and the Soviet Union consolidate into separate “spheres of influence”, where each would not meddle in the other’s territory. Thus, he believed that the US, Britain, and France had to combine their territories in Germany to create a separate West German state to serve as a bulwark against Soviet expansionism. But unfortunately, from his post in the USSR, Kennan exerted little influence on the Truman administration. That is, until 1946. Truman, languishing over the ineffectiveness of American diplomacy to keep the Soviets out of Iran and Eastern Europe, warmed to Kennan’s views about the nature of American-Soviet relations. In February of 1946, Kennan would write the Long Telegram–the telegram that came to have massive influence over subsequent American policy and would forever define Kennan’s legacy.

The first part describes the premises based on which the Soviets design their policy. It includes a quote from Joseph Stalin, saying “In course of further development of international revolution there will emerge two centers of world significance: a socialist center… and a capitalist center… Battle between these two centers for command of world economy will decide fate of capitalism and of communism in the entire world.” This quote illustrates that the USSR is unlike other states in that it is an ideological state, that views the world through an ideological lens. Their ideology is inherently antagonistic towards capitalist countries, including, of course, the United States. Kennan also posits that the Soviets believe that war is inevitable in capitalism, and that “smart capitalists, vainly seeking escape from inner conflicts of capitalism,” will start wars of intervention against the socialist world. Based on these premises, the Russians believe that “Everything must be done to advance relative strength of USSR as a factor in international society.” Additionally, “Soviet efforts… must be directed toward deepening and exploiting the differences and conflicts between capitalist powers.”

Kennan is very careful to not place the blame on the Russian people, rather, he blames the Soviet system and the nature of Russia’s historical ruling class. Kennan writes, “It was no coincidence that Marxism, which had smoldered ineffectively for half a century in Western Europe, caught hold and blazed for the first time in Russia. Only in this land which had never known a friendly neighbor or indeed any tolerant equilibrium of separate powers… could a doctrine thrive which viewed economic conflicts of society as insoluble by peaceful means.” Marxism, combined with Russia’s ruling class’s historical insecurities over invasion and revolution, creates an expansionist foreign policy hostile towards America and the West in general.

In parts 3 and 4 Kennan describes Soviet foreign policy in practice. In a passage that would prove relevant in years to come, Kennan describes how the Soviets will aim to weaken the power of the West on the third world to create “a vacuum which will favor Communist-Soviet penetration.” Kennan also goes into detail about how the Soviets use Communist parties in other countries to their own advantage.

Finally, Kennan outlines a response for US foreign policy. He advocates for a strong military buildup in order to contain the Soviets in their territory. He believes that “Soviet power, unlike that of Hitlerite Germany, is neither schematic nor adventuristic. It does not work with fixed plans. It does not take unnecessary risks. Impervious to logic of reason, and it is highly sensitive to logic of force. For this reason, it can easily withdraw--and usually does when strong resistance is encountered at any point.” Kennan believes that having a strong military will allow us to not have to use the military.

In summary, the Long Telegram states that the Soviets are “committed fanatically to the belief that with the US there can be no permanent modus vivendi that is desirable and necessary that the internal harmony of our society be disrupted, our traditional way of life be destroyed, the international authority of our state be broken, if Soviet power is to be secure”. In response, Kennan believes that the US must raise a military large enough to protect America’s interests and contain the Soviets to their own sphere of influence. It is important to remember that Kennan isn’t so much concerned with the morality of communism; rather, he takes a realist approach in addressing the Soviet threat to America’s geopolitical interests.

Once the Telegram was received in Washington, it immediately reached a wide audience. It was read by the secretary of war and Navy, and eventually by President Truman himself. It was circulated further, making its way through the American embassies and senior military officials in the Pentagon. Kennan went on a speaking tour in the summer of 1946, where he hoped to clarify his views and educate the public on the real threat posed by the Soviet Union to American interests. Kennan was early to reject McCarthyism, which would gain influence later that decade. He told an audience in Virginia that, “I deplore the hysterical sort of anticommunism which, it seems to me, is gaining currency in our country.” He also clarified the non-military response to the Soviets, which included trade embargoes, aid programs, propaganda, and alliances with unaligned countries.

Born out of the Long Telegram was the Truman Doctrine, which stated that, “it must be the policy of the United States to support free peoples who are resisting subjugation by armed minorities or outside pressure.” Kennan strongly opposed the doctrine, as it was a universal commitment to “free peoples”, rather than a realistic assessment of American interests. He rightly foresaw that universal commitments could prove dangerous and counterproductive. These universal commitments only grew, as NATO increased to include countries that were decidedly not in proximity to the North Atlantic. When Greece and Turkey joined the organization in 1952, they increased America’s commitments in a region where it did not have strong interests.

As Kennan took a more backseat role in the Policy Planning Staff (which he created), he was succeeded by more hawkish types like Paul Nitze and Dean Acheson. The fresh blood did not see America as a nation with interests that must, as Walter Lippman said, “bring into         balance… the nation’s commitments and the nation’s power.” They viewed the world through an idealist lens, seeing the triumph of democracy over communism and other moral considerations as more important than a reasonable measure of the expense of these endeavors.  Paul Nitze was the principal author of NSC-68, the single most important national security document of the Cold War. In response to the increasing military strength of the Soviet Union and the detonation of a Soviet atomic bomb, the report recommended massive increases in the military budget as well as the development of the hydrogen bomb. The document emphasizes that the Cold War is a global conflict, making the universalist proclamation that, “defeat of free institutions anywhere is a defeat everywhere.” George Kennan disagreed, “I was disgusted about the assumptions concerning Soviet intentions.”

Following the warnings of the Long Telegram, which precipitated the Truman Doctrine and NSC-68, America dove into a 40-year struggle for world domination with the Soviet Union. Containment was born, which would see America involved all across the globe: Korea, Vietnam, Cuba, Afghanistan, Iran, and more. Though Kennan viewed some conflicts as legitimate, such as the Korean War, he became increasingly isolationist later in life. He viewed with contempt as America got involved in unnecessary wars, especially Vietnam. The Long Telegram, the most well-known part of his legacy, became his greatest regret.

Thompson, Nicholas. The Hawk and the Dove: Paul Nitze, George Kennan, and the History of the Cold War. Picador USA, 2010.