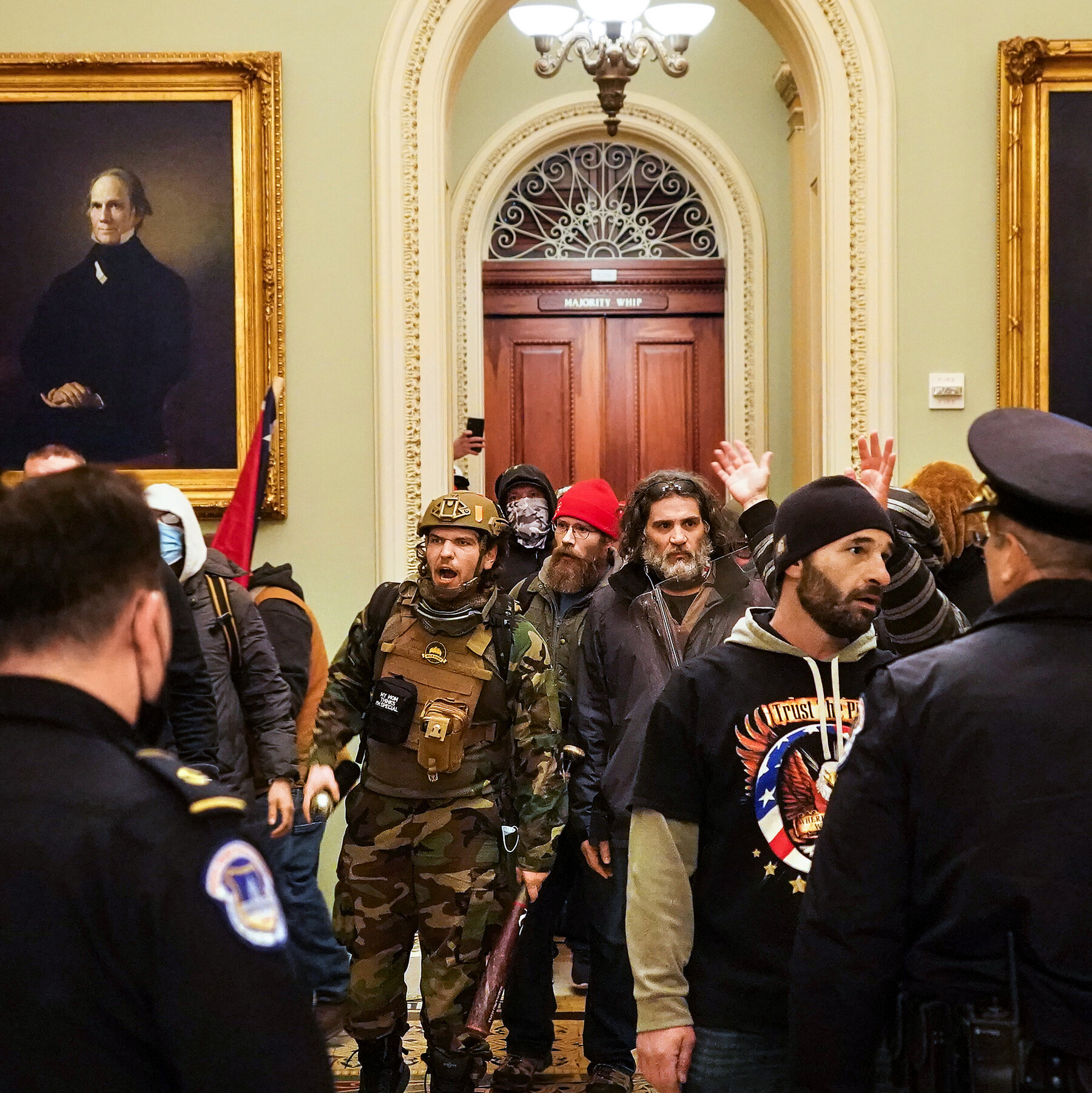 Insurrection Against the World's Leader in Democracy

As Congress was preparing to finalize the electoral votes and secure the presidency for Joe Biden, a massive turnout of Trump supporters joined forces and gathered at the Capitol. Having been there for a few hours, a chunk of the protesters grew restless and began to clash with police. Soon, the police barricades were overturned and hordes of people made their way towards the Capitol. They smashed windows, climbed fences, and banged on doors as they attempted to break into the building. Ultimately, they got inside and a significant amount of damage was done to the interior and exterior. It is predicted that taxpayers would have to foot the bill for the damages, according to Business Insider. This was all occurring during the electoral verification hearing and Representatives were scrambling to safety. Police had guns drawn and shots were fired, one of which proved fatal to a woman. A few people broke into Speaker of the House Nancy Pelosi’s office as evident from photographs shown by various media sources such as ABC and CNN.

The primary motives for this event manifested through the election fraud rhetoric expressed by President Donald Trump and many Republicans. Following the 2020 election and the media projections, calls of voter fraud and suspicion of voter irregularities have run rampant within the conservative community. The then-candidate Joe Biden had won both the popular vote and the electoral vote, but people were skeptical. How did someone who did not campaign with immense physical publicity and unclear political motives become the elected president? Additional election concerns were raised over mail-in ballots. The COVID-19 pandemic led people to question the practicality and the safety of voting in-person in the presence of a large number of people. Yet, many Republicans were not on board with the same way of thinking and instead, raised questionable (but not unfounded) accusations. Mail-in ballots had the opportunity to be easily manipulated and the potential for fraudulent ballots were always there.

Despite the fact that election fraud may have occurred, it is highly unfounded that it was a systemic concern. The Trump administration’s legal team led by former NYC mayor, Rudy Giuliani, could not bring forward sufficient evidence and even the conservative majority Supreme Court shut down many investigations. Legal losses plentiful, Donald Trump exhibited belief perseverance and used Twitter as his means of “spreading the word”. Calls for the election to be overturned and thoroughly investigated were the popular rhetoric of both politicians and constituents. Donald Trump contributed to the rhetoric by requesting that people gather and protest at the Capitol. To be very clear, he did not directly ask people to storm the Capitol.

The incident at the Capitol is a dire breach of the American legislature. It is an act of treason and all those having taken part in it must face the full force of American law. Why is it treason? It is treason because it not only disrupts the democratic process of elections, but it is a sentimental attack on the nation’s backbone: the legislature. It is comparable to Al Qaeda terror attacks, not in terms of fatalities, but solely on a sentimental basis. It is wholly unAmerican to be carrying around the stars and stripes while tainting the centuries of American processes.

However, this event is not at all synonymous with the Black Lives Matter riots that ensued throughout the summer months. BLM was more violent in nature and was characterized mostly by spontaneous destruction of property, both federal and private. On the other hand, the Capitol riot was an organized insurrection and carried significantly greater meaning (with a negative connotation). Axios states that the BLM riots caused over 1 billion dollars in damage while the Capitol riot wasn’t so financially demoralizing.

Now for the ideological explanations of both events. As mentioned prior, the summer riots, although based on organized protests and causes, were spontaneous. They morphed into anarchical events with looting, burning, and physical violence popping up frequently. It was a threat to the well-being of individuals and businesses, as well as serious disturbance of the peace.

The Capitol riots began as an organized protest and ended as the pacification of an organized and united insurrection. A few cases of physical harm and death did occur, but not to the scale of the summer. Instead of being a physical threat, it was a threat to the well-being of our nation’s principles and processes.

So what comes next? Joe Biden was recently sworn in as the president of the United States and he ushers in a new era of moderates leading an overtly progressive Congress. In order to prevent such an insurrection from happening, Biden needs to concentrate his efforts on bringing unity. Donald Trump’s election fraud rhetoric played a big role in the insurrection, but it is also highlighted by the mainstream media’s constant attempts to dehumanize and vilify the conservative population. All in all, America’s principle of democracy is currently dependent on the efforts of unity and mutual political respect by the Democratic Party.