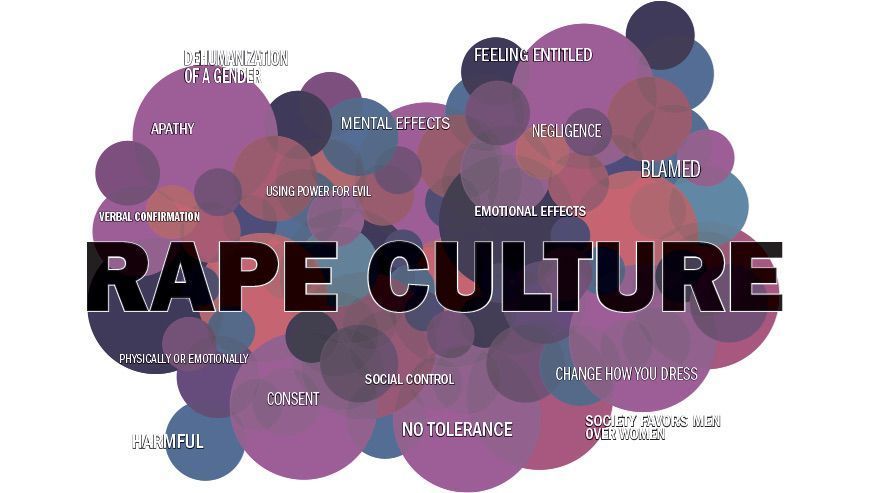 The myth of rape culture is a weighted term used by many feminists to attempt to explain the prevalence of sexual assault and misogyny in the U.S. The term was coined in the 70s by second wave feminists in the United States. The term “rape culture” is most often defined as a society or culture that allows or glorifies rape, sexual violence, or harrassment, almost always towards women. This term includes anything from the legality of such acts, to victim blaming, and even just sexist jokes. All of these fall under the umbrella of “rape culture”.

The sheer broadness of the term is one of the major reasons why the term is irrational, unfair, and not factual or necessary. The things that are actually shrugged off in our society, such as offensive jokes, should not be conflated and bundled with actual assault and violence, acts which are punished and looked down upon by nearly everyone. Not even to mention that the vast majority of our society looks down on more common, less severe but still predatory and pervasive acts like catcalling. For catcalling, or any act to even be considered as part of a rape culture or similar classification, wouldn’t a large percentage of people, specifically men, have to think it was acceptable or normal to catcall, or even engage in such behaviour? The fact that most men don’t find it acceptable (much less engage), should be evidence enough that even some of the mildest examples used to prove rape culture aren’t proof enough.

The widespread myth of rape culture preached by some feminists, is, contrary to their intentions, because it is perpetuating and widening perceived inferiority and inequality in the women who hear about it. The myth is basically solidifying a helpless victim narrative in women, and instead of ‘bringing awareness to a societal issue’, it is creating a “phantom” societal issue, believed and perpetuated by people who haven’t been able to see otherwise. The phrase is deepening the gap of inequality simply by existing, and the only thing we need to do to get rid of the perceived “rape culture”, is stop talking about rape culture.

The fact that we are naming societies rape cultures based on a small minority of incidents that are universally looked down upon by society is strange. Is the United States a car theft culture? Almost twice as many car thefts are reported per capita than rapes, and we have entire video game franchises named after such acts. Of course we’re not a car theft culture, just like we aren’t an arson culture, murder culture, or, you guessed it, rape culture.

What’s ironic is that some of the same people preaching that women are victims of rape culture are the same people shaming, victim blaming, and ignoring male victims of rape and assault, especially those taken advantage of or beaten by women. These people are actively participating in the thing they claim to fight against, albeit against the other gender, the one they claim rape culture doesn’t apply to. I will stand consistent and say that this is not an example of a “rape culture” that victimizes men, however. Because, just like if the roles were reversed, only a radical minority ignores the rape and assault against men, and engages in victim blaming.

Another argument I see often that claims itself as evidence of a rape culture is the fact that we “teach women how not to get raped; while we should be teaching boys not to rape”. There are so many things wrong with this argument; such so that in principle it creates whole different type of rape culture. Instead of making all women see themselves as victims, this will make all men see themselves as aggressors. A very sexist and bold sentiment to enforce, considering that a study supported by a research grant from the Department of Education and Science of Spain found that “based on a "convenience sample of 13,877 students in 32 nations" that 2.4% of males and 1.8% of females admitted to having physically forced someone into having sex in the last year. In a 2014 study of 18,030 high school students, there was no statistically significant difference between males and females for the reported rate of having been physically forced to have sex.” Why should we “teach boys not to rape” when such a minority of men perpirate cases of rape, with a nearly identical number of women committing the same act? Even if one group commits an act statistically more, why should that be the only group we drill an aggressor mentality into? This saying is, in fact, the exact parallel to the saying “teach black guys not to steal or murder”. Everyone would agree that that saying is offensive, unfair, and derogatory, perpetuating unfair stereotypes. Even the progressive radical feminists who preach “teach boys not to rape” would agree there too. So what makes this situation different? Nothing. Someone who says “teach boys not to rape”  should be treated the same as someone who says to “teach black guys not to do crime”.

Plus, what do they think we are doing now? Teaching boys to rape? I haven’t met one person who’s parents, teachers, friends, or society encouraged them to do any such thing. Rapists are sick individuals, and a minority, so any education or societal change that doubles down harder on rape won’t change rapists’ actions. Thus “teaching boys not to rape” will not prevent or stop a significant proportion of rapes, if any at all. The first part of the saying, “stop teaching women how to not get raped” ties perfectly into this. When the action you advocate to implement will not decrease rapes, while the action you advocate to revoke does decrease successful rapes and increases awareness, defense, and self reliance, the pair of actions will actually increase successful rapes. Not to mention that everyone, male or female, is encouraged to be careful and enact measures of defense to mitigate the chance of rape. No man will leave his drink uncovered or unattended, because everyone is taught how to be careful and not be raped, not just women.

Rape culture is often used in the context of the United States, never really focusing on the rest of the world. The truth is, America is comparatively rape and sexism free compared to many African, Middle Eastern, and South Asian countries. Why aren’t these rape and inequality heavy countries at the forefront of the rape culture argument? Why are we turning a blind eye to the literal legality of marital rape, as well as extremely high relative rape index scores in South Asia, the Middle East, and most of Africa?

To conclude, the examples feminists use to prove the existence of a rape culture are not based in facts, while the very term and the “actions needed to get rid of it” both demonizes men as aggressors while painting all women as helpless victims. It also claims itself into existence based on examples looked down upon universally by all, while logically being the same as claiming America is a car stealing culture, which is a ridiculous thought to try and rationalize. To claim an American rape culture is not being ‘woke’ or empowering, all it does is enforce negative, sexist, and frankly untrue stereotypes of both genders, widening an unnecessary inequality gap between the two. The sad truth is, we as a society will never 100% eradicate rape, sexism, and objectification. But in the western world, we are about as close to it as an imperfect society could be.