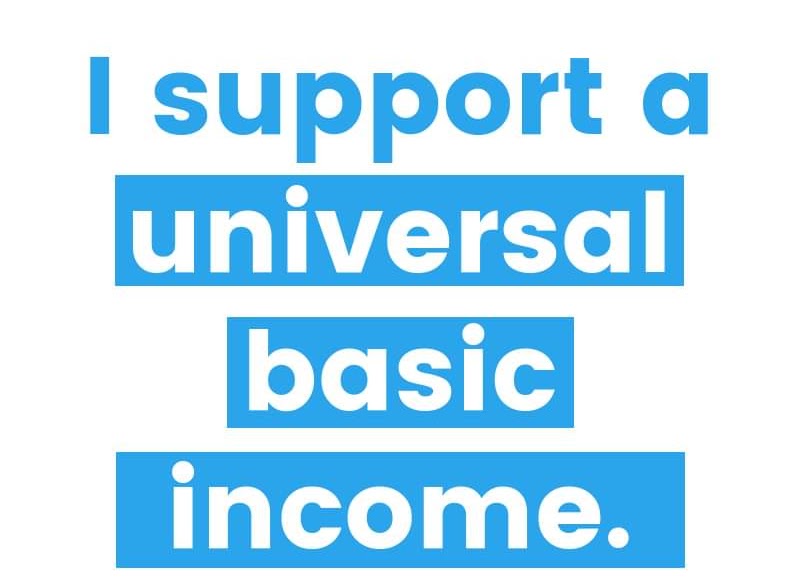 The Pro to the UBI debate.

Universal Basic Income is a recurring payment to every member of society or citizen sized to meet basic needs. Although no country has a UBI implemented, many studies and small scale experiments show positive effects.

A successfully implemented UBI could practically eliminate monetary poverty. If everyone is given a payment equal to the poverty line, no one will be living below it. This was supported by the famous economist and philosopher Friedrich Hayek who said that, “There is no reason why in a society which has reached the general level of wealth which ours has…that the security of a minimum income should not be guaranteed to all...”

This minimum income would also help many domestic abuse victims. Many want to leave their abusers, but are unable to because they depend on their abuser for basic needs such as food, clothing, and shelter. UBI would help these people from a financial standpoint, allowing them to afford basic necessities and therefore releasing a number of potential workers who were previously confined to domestic abuse.

A UBI would also be beneficial to public care services and care workers as many people with sick or disabled family/friends either quit their jobs to care full time, or can’t care for them because they need to work. In the former situation, a UBI would allow these care workers to support themselves. In the latter situation, a UBI would encourage care work therefore lessening the need and funding for public care services for sick/disabled/elderly people.

The average working class would also benefit as a UBI would give workers a paycheck to fall back on, and when workers have financial security they have more bargaining power for their wages as they’re not desperate for any source of income. This would prevent employers from taking advantage of desperate people looking for work and discourage low wages and bad working conditions.

UBI would not only help underprivileged people though, it would also improve society as a whole and create a thriving economy. Many people in want of work are jobless especially amidst technological advancements and COVID-19. A UBI would act as a safety net making it significantly easier for the jobless and homeless to find a job and contribute to the economy.

UBI would greatly reduce wealth inequality helping the unemployed to become employed. Many people without the privilege of wealth or wealthy parents get stuck in the cycle of poverty. Without money they can’t afford interview clothes, transportation to a job, a house for a bank account, and many other factors requiring money that makes it possible to get a job. A UBI would increase the number of people able to start working and even start a business therefore contributing to the economy.

Some believe that a UBI is unfair because people with more wealth have to pay for poorer people however this isn’t true because universal means that every member of society receives the cash transfer no matter their current income or wealth. In fact some of the richest people alive support a UBI including eBay founder Pierre Omidyar, CEO and scientist Elon Musk, co-founder of Coursera and chief scientist at Baidu Andrew Ng.

UBI has the potential to break the cycle of poverty, something that current welfare systems have failed to do. As one if the Facebook founders Chris Hughes said “Cash is the best thing you can do to improve health outcomes, education outcomes and lift people out of poverty.” This is because if recipients of welfare start to make above a certain amount, then they’ll lose their benefits such as medical care, food stamps, and housing vouchers that helped them start to make money in the first place. With this the cycle of poverty continues as losing these benefits makes it incredibly difficult to continue to build wealth to a point of financial stability.

This also means a UBI doesn’t have to come from higher taxes, as many government funded social programs such as food stamps, unemployment benefits, and subsidized housing come from income taxes and go to poor people who can’t afford these things. A UBI would replace these programs over time and eventually reduce the need to fund these programs if not totally eliminate them all together which would create a much more efficient UBI system that is also fairer to wealthier individuals.

A study in Iran reduced subsidies to gas and bread markets to pay for UBI, and the results were mostly positive. The study launched in 2011 and found no evidence of people leaving the labor force after receiving cash transfers from UBI, in fact it found that some workers even expanded their hours and/or their businesses. The report claimed that "Our results do not indicate a negative labor supply effect for either hours worked or the probability of participation in market work...” The only negative effects found were that people in their 20s tended to work less, however youth in the labor market was already weak, and many of these people sought higher education instead.

Another study done in Dauphin, Canada in 1974 designed by a group of economists who wanted to do something to address rural poverty also had mostly positive outcomes. Over the course of 4 years there was a 8.5% decline in hospitalisations believed to be caused by added security from the basic income. There was also an increase in the number of young adults completing high school, surpassing the rate of nearby towns without a UBI implemented. By 1976, 100% of students enrolled for their final year of school. Many new small businesses also sprung up. However after the experiment ended, many of the new businesses closed and vanished, and many of the improvements returned to the poorer conditions before the experiment.

Successful implementation of UBI would likely help many working class and jobless citizens as well as fuel a thriving economy and a better society. It would be much more efficient than current welfare programs as it addresses poverty at its roots instead of attempting to slap a band aid on once it’s too late. Every citizen, no matter their income will receive a very basic payment to live off of, therefore reducing poverty and maintaining incentive to work, while still seeing the benefits of capitalism and free markets.