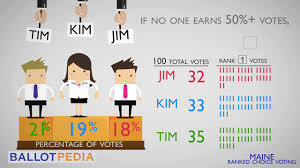 What is Rank Choice Voting (RCV)? Rank choice voting is a system of voting by which a person picks their top choices on the ballot in rank from first to third. So if someone’s pick is their first choice and that candidate wins a majority of the votes. However, if no candidate on the ballot gets a majority of votes then it goes down to the “second choice” pick and so on for the number of selected choices. There are a lot of issues with rank choice voting that are based on the fundamental ideas of James Madison when he was writing the Constitution.

Rank-choice voting first popped up in the 2000s in select cities as a testing ground during mayoral and other municipal elections. It was an idea to bring a change in the voting process to make it seem as if the voters had more choice and say during the election which is completely false. In reality, the two-party system at the end of the day will still win because they have a dominating presence in the media compared to independent campaigners. RCV really requires voters to independent research outside of media biases such as CNN, MSNBC, and Fox News. If there are going to be multiple choices on a ballot to choose from and in order to pick the candidates you identify the most with. To be a responsible voter you need to know the list of not just candidates, but the policies of the candidates before you get your ballot. That’s what’s nice about our current system to find out who wins elections is that people can vote for the one candidate and that’s there one vote. Not vote for one person and then given out half a vote to another candidate if the first choice doesn’t outright win. The idea of the Constitution and this system of voting including the Australian Ballot is the idea that your vote directly counts for a candidate. But, then someone could say the electoral college prevents a vote for truly counting for a single candidate. However, it is entirely different because James Madison believed that in order to prevent tyranny of the majority and that 50% of all people plus 1 could decide the laws for the rest of the country.

If rank-choice voting were to be adopted it could have the possibility to cancel some people’s votes outright. If there someone only selects one candidate because that’s the only platform they support. The ballot could be tossed out because it doesn’t have options for another choice if the one and only pick doesn’t get chosen. Another issue with this is that there is no system currently to process ballots that use rank-choice voting. Although in some cities they have RCV it isn’t an officially approved way of voting by the Election Assistance committee. In addition in order to support RCV states like Maine would cost taxpayers around 1 million dollars extra per year. Although 1 million a year for an untested system of election seems like not that bad of a trade-off, on the contrary, this could have a drastic impact on any level of government. In this case, having an untested system of democracy could lead to issues of voter fraud and missing ballots.

There are some benefits though such as a slight increase in voter turnout in the municipalities that offer RCV. As well as more involvement from candidates in the local communities, along with more people talking about candidates in the home setting. This opens another question shouldn’t voters be informed on who they are voting for instead of focusing on the party they represent. This is the con with the two-party system that because there aren’t any voting tests anymore you can’t gauge the education of potential voters. The education of voters means that a citizen who is going to vote should understand basic government and how each candidate is going to run the country if elected. The issue with this is that because of the Fifteenth Amendment bars anyone preventing an individual from voting. So there can’t be a poll tax to make sure what someone is voting for is worth the time and money. It also can’t be a literacy test to determine is competent enough to be voting. That’s why your one vote should count as one vote because people are just going to vote for the people who get soken the loudest in the media. If people want to vote for Bernie Sanders over Joe Biden so be it.

If there should be voting reform it should be with prisoners because currently there over 2 million incarcerated individuals that don’t have a voice in prison. That even though they messed up in the eyes of the law they shouldn’t be barred from executing their civil liberties. Right now around party voters, there is about a 50% belief that their votes aren’t being tallied correctly. Australia currently does the rank system and for a Parliamentary election and in all levels of the process less than 50% of voters wanted that candidate to win. Comparing Australian politics and media to the US propaganda machines is hardly fair. Since the Constitution was written and after Washington’s presidency, there have always been two dominant political parties. To change that would be in it of itself changing American culture and political identity. This isn’t to say that change isn’t good in reforming politics, but it has to be constitutional and not because people are upset that one person won the presidency. Moreover, although the 2 party system is not ideal at some point in time the two sides allow for an individual to have a major “faction” to be advocating for their ideals. In the near future, there could be a definite shift to more 3rd party candidates as people see better options in independents. Ultimately there will be lobbying against rank-choice voting by major companies because big-time politicians since they have the power and influence to stop it.