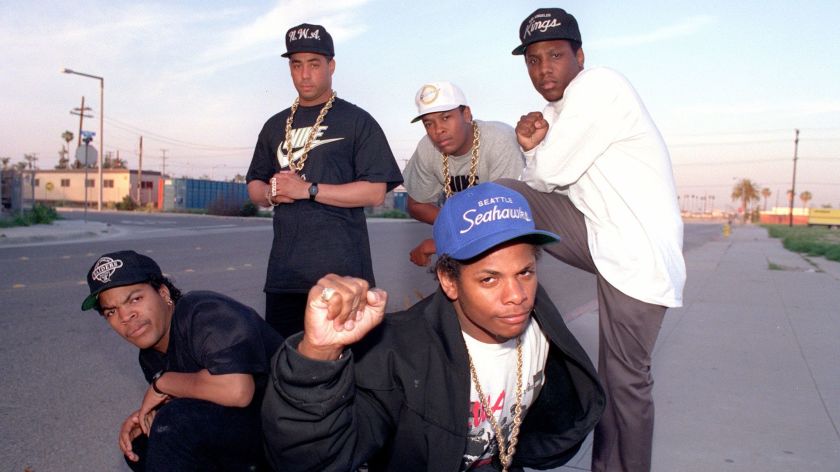 Rap & the Radical Left: Where They Stand

There is a newfound understanding of the power of media and culture as a linkage institution. The discovery of the alt-right pipeline — i.e. the indoctrination of White teenage boys into alt-right ideology via Youtube algorithms — has allowed for a greater understanding of the proliferation of alt-right ideals. However, as radical lefitist ideals are pushed more to the forefront as a product of our current social reality, little is known about how people are being radicalized.

Historically, Black actors, musicians, athletes, and other cultural figures have pushed people to the moderate left by making more people aware of and sympathetic to racial injustice. Specifically, Hip Hop culture and Rap music played a massive role in getting people to use media and culture as a vessel for activism.

Rap music as a form of advocacy really became popular with the Rap group N.W.A. after their 1988 Straight Outta Compton. The album displayed their struggles as Black youth in Los Angeles through addressing the then-crack cocaine epidemic, gangs, violence, and poverty. This was when N.W.A. coined “Fuck tha Police,” a song that first introduced the idea of a bastardized police system (what we currently know to be the ACAB movement).

N.W.A.’s album set the precedent for the type of advocacy utilized by rap music — a type that grieves over our current racial reality and the people who uphold the system that causes them. Today, advocacy in rap music is more prominent than it used to. Rappers today discuss the current social turmoil, but notably, rap’s advocacy has taken a turn toward Black joy. Black joy in rap music has been a way for Black people to accept that part of addressing the current realities of Black people in society is addressing and healing from the pain in the past. In rap music, this looks like the celebration of Black culture — take Solange and Gucci Mane’s “My Skin My Logo.” For Black women, it looks like embracing one’s sexuality and sexual liberation. While rap group, Salt N’ Peppa, paved the way for this movement, the modern rendition of this movement is best characterized by Megan Thee Stallion and Cardi B’s WAP.

On a larger level, rap’s advocacy acknowledges the presence of a racist system. But, it rarely criticizes it in a way that encourages revolution, which would make rap radically left. Rap music also fails to address the other factors that have embedded racism into our institutions.

They mad 'cause I made myself a boss without crack”

While 21 Savage clearly alludes to the war on drugs and race’s relation to class, he does not address dismantling this system and continues to venerate his wealth:

Straight up out the trenches, money made me ign'ant (It did)”

And while his address to racism and police brutality and harassment remain evident, the verse is not radically left.

Kendrick Lamar’s To Pimp a Butterfly stands as one of the most socially-conscious rap albums to date, with race and class struggle being a central theme throughout its entirety. He addresses these in the song “King Kunta” with a reference to a Malcolm X’s “Twenty Million Black People in a Political, Economic, and Mental Prison” speech:

He then establishes himself as a happy member of the capitalist system that oppresses him because he’s a Black man:

“Straight from the bottom, this the belly of the beast

These are but two examples of this pattern in popular rap music — the artist will criticize racism or reference black liberation but will then denote themselves as a happy member of a system that continues to bind them. While this pattern has successfully raised awareness of the dangers of racism and the class struggle, this pattern is not representative of leftist radicalization in the media. It’s not the current yearn for revolution that many radical leftists push for today.

But, what can this radical leftist agenda look like in rap? Is discussing class revolution feasible in rap music when part of hip hop culture is the veneration of wealth? Do rappers socially grieve over the right issues? Should they criticize the system, not just those who perpetuate it?

While these questions remain unanswered, an answer to another question is clear: rap music cannot be held responsible to indoctrinate people into racially left ideals.

What does this mean? Within the context of the social power of rap, it’s clear that the genre’s ideals are being deemed less and less radical. N.W.A.’s “vital response to the growing disenfranchisement from the Reagan-era politics that had transformed the nation” presented in Straight Outta Compton seemed so radical that the FBI got involved. Now, the content matter they discussed is commonplace in music. While this fact has made conversations about social issues like racism and class struggle more palatable for the average American, most are used to hearing this subject matter discussed. It is no longer jarring; it is boring and easy to ignore.

So, rappers must begin to discuss more radical, farther left ideals for rap to have the same social power it once did. But, when rappers do so by beginning to criticize racism as a system, they see “breaking out” of this system as being able to speak braggadociously about their wealth. This reaffirms the power and benefit of capitalism to the listener, cancelling out the previous radicalization that they had pursued.

Within the context of the radical left, this means that rap can only be referenced as an example of a radical response to racism, not capitalism. But, seeing as anti-capitalism is one of the fundamental beliefs of the radical left, it’s hard to see what they could do with rap as a linkage institution.