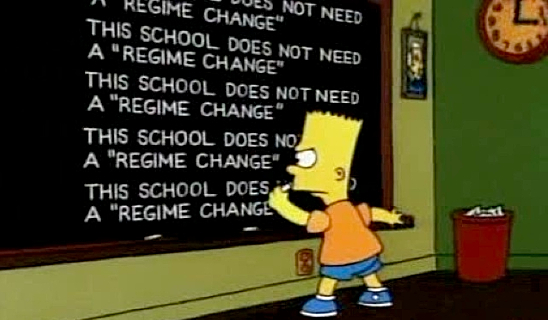 Regime change policies are exactly what they sound like: when one country, covertly or overtly, interferes with another country's government with the goal of changing said government. These policies range from backing military coups to covertly supporting a politician or political party and even outrightly overthrowing the government and replacing it with another. Since the United States (U.S.) stepped onto stage as the “world's police,” it has attempted regime change policies multiple times.

One of the most well-known regime changes was the Iran coup in 1953. “Operation Ajax” was a joint effort by the American and British governments, which replaced the democratically elected Iranian PM, Mohammed Mossadegh, with the young Shah, Mohammed Reza Pahlavi. Pahlavi was a valuable ally to the West until 1979, despite starting Iran’s nuclear program. However, the U.S.’ interference in the Pahlavi’s rise to power is the main reason why Ayatollah Ruhollah Khomeini, and his political successors, have been so hostile to the West, especially the U.S. (Walt 2018).

In 2003, despite having no evidence that Iraq was building weapons of mass destruction (WMD), the U.S. invaded Iraq and ousted Saddam Hussein, the fifth president of Iraq. The result was not a more peaceful Middle East or a more U.S.-friendly Iraq. Instead, the ousting led to the expansion of Iranian influence, a bitter insurgency and the beginnings of the Islamic State (Walt 2018).

In 2013, former President Barack Obama joined a coalition with Britain, France and multiple Arab states to remove Muammar Qaddafi from power in Libya following anti-Qaddafi uprisings during the Arab Spring. Rather than a more democratic and peaceful Libya, this resulted in new opportunities for the Islamic State and a new path for unsecured weaponry to flow to war zones, as Libya descended into anarchy (Neale 2018).

In Syria, the U.S., Saudi Arabia and other powers attempted to aid anti-Bashar al-Assad forces, while Russian and Iranian forces helped keep Assad in power. This has resulted in over 500,000 casualties, violations of the Chemical Weapons Convention and risks of further escalation (Arms Control Association 2020).

On occasion, as with Iran, regime change policies can be successful in the short-term. However, long-term effects often include destabilization or the rise of authoritarian, anti-U.S. governments.

So, why do these policies fail? Regime change policies, like the ones listed above, have one main goal: to replace the existing regime with one that will benefit the outside nation. The hope of creating a friendlier regime, especially where the U.S. and the West are concerned, is either to spread democracy or advance economic interests. More often than not, an attempted switch to democracy is part of the regime change policy, with notable exceptions such as Iran in 1953 (in which case the U.S. replaced the democratically elected regime with Pahlavi). However, the main reason that these policies fail is that for a government to be effective, it has to have the support of or power over its people.

The regime change in Iran is a perfect case study as to why these policies fail. Pahlavi was extremely unpopular, and the only reason he was able to remain in power was because of the U.S.’ support. Once Pahlavi was overthrown, he was succeeded by Khomeini, who quickly transformed Iran from a “pro-West monarchy to a vehemently anti-West Islamic theocracy” (Council on Foreign Affairs). Pahlavi was unpopular for multiple reasons, but chief among them was that his pro-West economic policies relied on and benefited Western economies and the oil market while gambling the standard of living and economic standing for most Iranians. Not only this, but because Pahlavi was kept in power by the U.S. and quashed all opposition with his secret police force (SAVAK), previously secular groups and scholars began turning to Khomeini’s populist appeal and preaching of the evils of foreign interference and Pahlavi’s rapid modernization of Iranian society (Afary 2020). When a regime has to rely on outside powers to stay in power, as soon as that regime crumbles, the new one will move to counteract whatever had been done by the previous regime. When Khomeini took control, the social reforms put in place by Pahlavi were reversed and Islamic law was reinstated. The government went from pro-West to an anti-West fundamentalist theocracy. Even when a government is deeply unpopular with its people (take Hussein for example), if foreign powers remove that government and replace it with one that benefits foreign interests, that government will also become deeply unpopular and will create a political environment ripe for a future populist and authoritarian regime.

One of the most common arguments for regime change policies is that the regime in need of change is corrupt and does harm to its people in order to benefit itself, and that if the people were given the chance at democracy, they would elect a government that had their best interests in mind. While this is a perfectly logical argument (both Hussein and al-Assad’s governments were full of human rights abuses) it ignores the fact that for democratization to succeed, there are necessary cultural and economic conditions that must be met.

First and foremost, there has to be a sustainable distribution of economic power. In other words, without a middle class, democratization will not succeed (Cesari, 2016). Secondly, religion cannot be used as a tool for political opposition. Again, Iran is a perfect case study. Khomeini used religion and populist appeal as an alternative to the perceived failure of the secular state. When foreign powers execute regime changes in countries without a strong enough economy or a pre-existing belief in the separation between religion and the state, democratization will fail, and the result will be a pendulum swing effect toward authoritarianism or theocracy.

An example of the economic conditions not being met can be seen in Iraq. When Hussein was ousted, Iraq had virtually no middle class, in part due to the sanctions imposed on it during the 90s. This meant that the majority of the Iraqi population had to rely on tribal leaders for protection and their standard of living. Because of this, these tribal leaders held power over the Iraqi population, creating an immense imbalance of power that made democratization extremely difficult. In Libya, the economy collapsed when Qaddafi was removed, and the economic conditions made it impossible for a stable government to form, and thus allowed for the Islamic State and other militant groups to move in and take advantage of the power vacuum.

In short, regime change policies, while sometimes successful in the short-term, are doomed to fail in the long-run because these policies are always meant to benefit foreign powers rather than the people under the regime. These policies then create a political environment that allows for populist and authoritarian governments to form, ultimately defeating the purpose of the regime change policy in the first place.