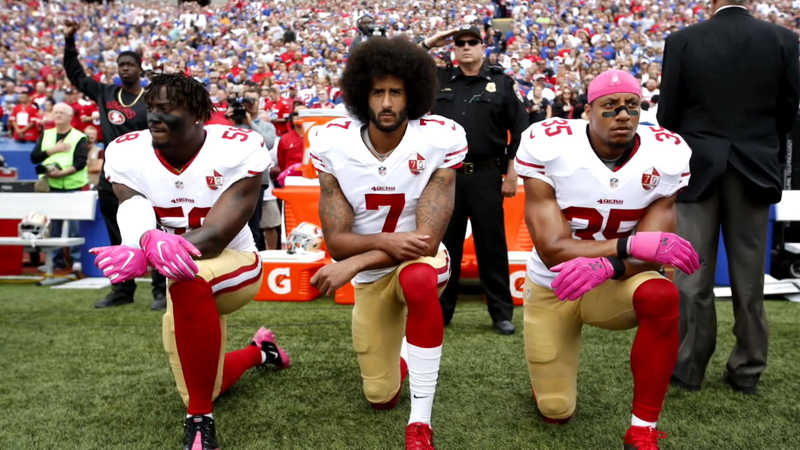 Without the right to protest is one really American? Kneeling during the National Anthem was first done by Colin Kaepernick to protest police brutality against people of color. This action is highly controversial due to him doing it during the national anthem. As Americans, one is bound by the amendments. That is what gives us certain unalienable rights, liberties, and differentiates us against other countries. Though controversial it is protected under the first amendment. To impede or stop this would be an attack on the first amendment and a travesty to democracy. Kneeling during the National anthem should bring the attention of many to the bigger problem at hand, police brutality on minorities.

Martin Luther King Jr. an American hero and example for all who strive for equality has always said no to violence. King protested peacefully and did something against the normality of society to draw attention to his cause. His way of protesting was passive but it caused many waves as we can see its effects today. King exercised his Godgiven right to assemble and protest. So why shouldn’t one be able to do that today as King did? At the moment his detractors called him many names and offenses because he was disturbing the natural order. But isn’t that the principal cause of protest? To disturb the natural order of society in order to cause attention to be drawn to your cause? The protest is not meant to be comfortable, in fact, in order to be successful, it should be quite the opposite. Protest should be uncomfortable forcing people to see the current injustices that face America. This is the case today with kneeling during the national anthem.

Passive protest doesn’t hurt anyone and should be tolerated no matter the cause. This form of protest contrasts active protest, for example: burning the flag. This inalienable right is what makes Americans unique. Without the ability to protest and push against the establishment some Americans would not have the rights they have today: Women Voting and the Rights of people of color. Protesting and causing attention to a problem or cause is the first step in a long road to solving them but it still is the first step.

Police brutality is a grave threat to society and today it seems like it is overlooked. Though in the past couple of years and recently it has made incredible strides and has had mass exposure to society. This recent blast of exposure is attributed sadly to the death of George Floyd. Professional Sports players use their platform and media attention to help spread awareness against police brutality most notably by kneeling during the national anthem before games. This action is highly controversial due to the fact that the national anthem is meant to unite all Americans and is disrespectful to servicemen and women who have sacrificed so much. But as the players have said it is not their intention to be disrespectful. They meant it to cause attention to a greater evil in the United States, police brutality. When someone that has media exposure and kneels it shocks many but most importantly it causes dialogue. It causes dialogue from everyday people about the cause of kneeling. Dialogue is so important to the fibers of democracy because it forces each side to understand the principles of the problem which eventually provides a solution from either side. The conversation may be small and seem unimportant but it is a step in the right direction.

The position of kneeling is not a position of power in fact it surrenders power. It makes the performer of the action seem smaller and more vulnerable therefore it is clearly a non-violent position.  Kneeling is clearly a humble position. The symbolism of kneeling is meant to express dissatisfaction from a flag that represents a country that oppresses black people and people of color. This action may be disrespectful to the Veteran and military community but isn’t the purpose of their service to protect America, its rights, and interests? So, therefore, it is in America’s best interest that people be able to express their displeasure with the police system and protest against the injustice so many people of color have faced. Banning kneeling would be against the 1st amendment but most importantly it would be a monumental disservice for all the men and women who have sacrificed so much so we could exercise those rights. In fact, the original idea of kneeling was not Colin Kaepernick’s it was Nate Boyer’s.

For many people, the Nate Boyer would not sound familiar or ring any bells. Boyer was a Green Beret who served several tours in Iraq and Afghanistan. He got out of the military and played football for the University of Texas at Austin and later for the Seattle Seahawks. Boyer suggested to Kaepernick to kneel versus sitting during the national anthem being that it may seem more respectful for veterans and the rest is history. Kneeling came from advice from a former special forces member, who gave more than enough service to his country, as a sign of respect for the veteran community. Kneeling came as a sign of respect from a veteran. This changes all arguments from detractors who state that kneeling is a sign of disrespect and disservice for the veterans and military community.

To exercise a right one is unknowingly thanking those who fought very hard or even gave the ultimate sacrifice so that all Americans have the opportunity to exercise those rights. Today now, the opportunity has come and with it a wave of controversy and hate from detractors who state that it is disrespectful to the veteran community. But in reality, it was Nate Boyer a distinguished member of the veteran community who suggested it to Colin Kaepernick, making the argument that it is disrespectful to veterans extremely weak. In conclusion, kneeling during the national anthem should be a respected form of protest against the racial inequalities of people of color and police brutality.