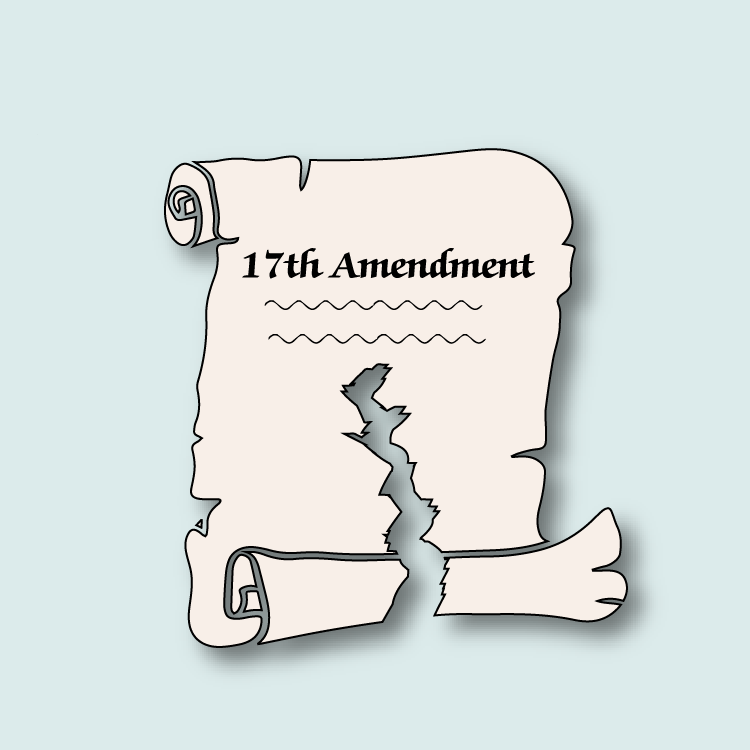 The 17th Amendment: A Detrimental Departure From The Constitution

Perhaps the most obvious method of selecting senators would be a popular vote. This is, of course, the way it has been done for a hundred years now. However, this is the very reason the methods of the founders of the U.S. constitution are so often overlooked. In the majority of Americans’ minds today, one of the most fundamental ideas is democracy and the widening of its use. Our founding fathers however, did not have such a blind attraction to democracy. Foremost in their structure of the federal government was an effort to protect the liberties of citizens at the expense of majority rule.

Due to this, our founding fathers extensively deliberated the structure of our federal government. After reading James Madison’s notes from the constitutional convention, it becomes clear that our fathers’ deliberation led to the creation of the federal table. The federal table was to be composed of three distinct and unique entities. The first being the nation as a whole, the second being the people, and the third being the many states. To keep the federal government in check, our fathers built it on the necessity to derive power from many different locations. The presidency would derive its power from the nation as a whole, The House of Representatives would derive its power from the people, and The Senate would derive its power from the many states. This Federal Table was created to ensure our federal government never became the tyrannical giant our fathers were fleeing. It was created to ensure and preserve liberties.

Our founding fathers created a system in which The Senate was “composed of two Senators from each State, chosen by the Legislature thereof.” The Senate was composed of appointed senators by state legislatures to keep a check on federal power. It was decided senators should be selected this way because every politician, no matter how altruistic they claim to be, has their own interests. Almost always, those interests involve power in some form or another. Due to this desire for power, politicians will vote in favor of whoever put them in power. This is the same principal our House of Representatives functions on. If a House Representative steps out of line of what the people ask of them, the people will vote them out of office. Similarly, if a Senator steps out of line, the state legislature which put them in power would simply remove them from that power. This created a force to keep federal power in check. In Federalist No. 62, James Madison states that giving each of the many states a seat in the federal government is an advantage in “giving to the State governments such an agency in the formation of the federal government.” State governments similarly to the federal government constantly seek power and Senators appointed by state legislatures thus must vote in the Senate in favor of protecting the power of the state government which they represent, restricting the power of the federal government.

For 125 years, this power check on the federal government stood in place to protect liberties. Then, in 1913, the 17th amendment to the US constitution was ratified. Stating, “The Senate of the United States shall be composed of two Senators from each State, elected by the people thereof,” the 17th amendment called for the popular election of senators and did away with power checks which were previously in place. Fundamentally, the 17th amendment destroyed constitutional federalism by erasing the power divide between federal and state governments.

Federalism is a system of government where the same region or body of people is governed by multiple levels of government. This is to ensure local issues do not impact the law of the entire country. Additionally, federalism allows for laboratories of law as many of our founding fathers and Supreme Court Justices have put it. Federalism allows for new and experimental law to be put in place in a single state without putting the entire country at risk. As James Madison claims in Federalist No. 10, if “factious leaders kindle a flame within their particular states,” federalism will prevent such a “conflagration through the other states.” Constitutional Federalism was explicitly put in place by our founding fathers to protect the liberties of every citizen and avoid the creation of another tyrannical government.

Additionally, the 17th amendment has failed on its promise to return power to the people. Not only do senators today not represent the interests of state legislatures, but they also don’t even represent the interests of the people who are supposed to be electing them as the 17th amendment states. Largely today, senate elections have become such pretentious events that senators no longer even represent the people of their state. Possibly the best evidence of this is the last runoff election in Georgia on January 5th. Not only did spending in the race shatter almost all records, but the vast majority of campaign contributions came from out of state. This becomes a tremendous issue considering that campaign donations in Georgia to democrat candidates amounted to about $5 million, while out of state donations from New York amounted to $10 million and contributions from California topped $25 million. Out of state donations such as these impact elections enormously especially considering in state donations to republican candidates topped donations to democrat candidates while out of state donations to republican candidates were far lower. Not only do senators no longer represent state legislatures, but they do not represent the people of their states as outlined in the 17th amendment either. They represent their largest donors who can influence elections the most.