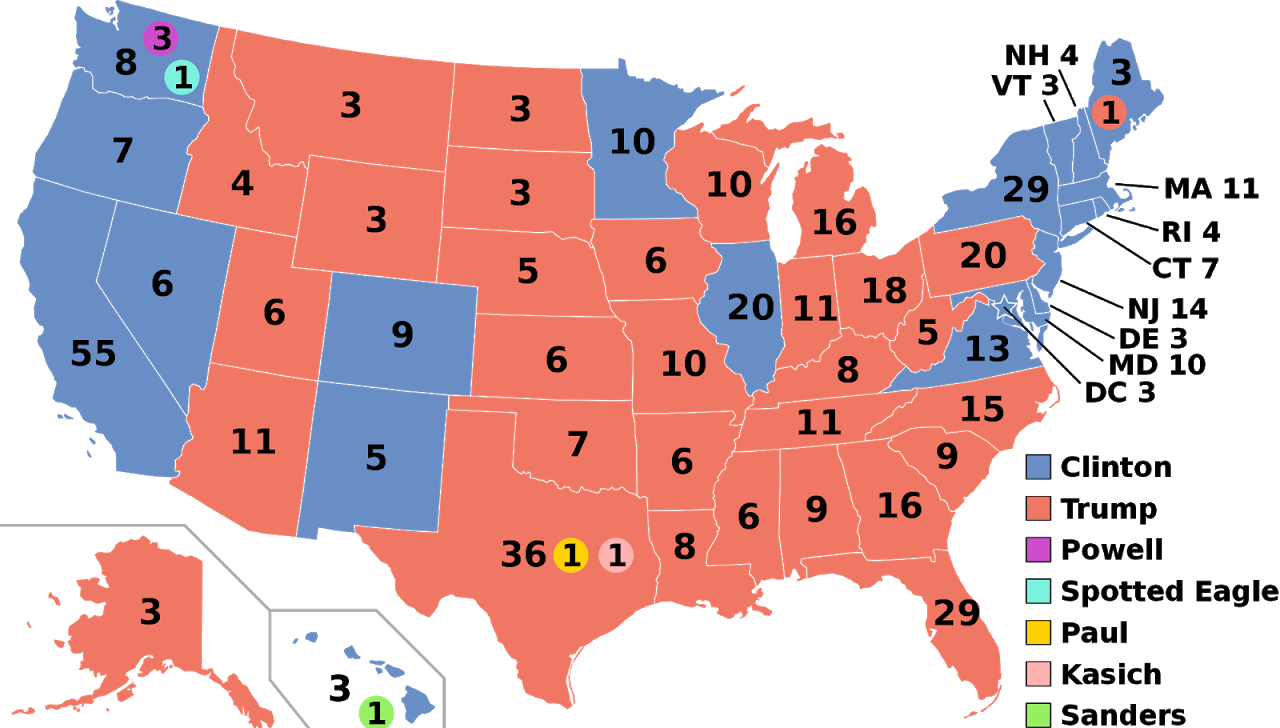 The Electoral College is Essential to the USA

By
Editor in Chief
on
May 2, 2021
Category:
National Policy

The Electoral College (EC) vs. The Popular Vote (PV)

EC - Voting power is spread among the 50 states

PV - Voting power resides in the most populous states and cities

EC - Campaign strategy is to win the most STATES and their EC votes. Campaign efforts focus on the states most likely to support the party philosophy and platform.

PV- Campaign strategy is to win the most individual VOTES. Campaign efforts concentrate in the largest cities and states. There are no swing states.

EC - It is difficult for a 3rd party to have an impact, but not impossible. A 3rd party can gain EC votes by focussing resources in the small states to win their EC votes. It only takes 250,000 votes to win 3 or 4 EC votes in each of the 10 smallest states. A 10 state 3rd party coalition would be powerful in Congress

PV - It is virtually impossible for a 3rd party to gather enough nation wide votes to have any impact on a Presidential election at all.

EC - The nominees are chosen by a series of primaries and caucuses or other means based on the desires of the voters in each state.

PV - The nominees are chosen by the party leadership. The leaders look to the states which can reliably provide the most votes for their nominee. They will make their selection based on that criteria, not what the voters in any individual state might want.

e.g. Democrats will always choose from the strongest and most popular politicians in CA and NY. Why would they look to any other state since CA and NY can provide 13.2 million votes as they did in 2016. CA has provided the Democrats with a margin between 1.4 and 4.6 million votes in every election since 1992. NY has had a Democratic Party margin between 1 and 2 million every election since 1992.

EC - Votes are awarded based on the number of congressmen each state has. CA gets 55 EC votes, no more no less. The smallest states get a minimum of 3 EC votes.

PV - Votes are put into one national pot and distributed to the individual nominees with no regard to the states the votes come from. CA can award millions of votes to one nominee and thereby swamp out any impact from a small state.

EC - Elections are established and run by each state under the control of the states’ Secretary of State office.

EC - Poll opening and closing is set by each state. Results are released as soon as possible after the state’s polls are closed.

PV - Poll opening and closing is set by the OOE. Results are held secret until all polls nationwide have closed.

PV - In a close election it will be necessary to recount the results in all 50 states.A thousand vote error in 50 states could be a 50,000 vote nationwide error.

As a summary of the above 8 points -

Well first, it is in the Constitution. That’s always a good starting point. Here’s another: would you really want a handful of states deciding every presidential election? In very few instances does the president not win both the popular vote AND the electoral vote, so normally they will mirror each other. But California as the most populous state has the largest population. Should California and maybe New York and a few others decide all Presidential elections? Based on their populations alone, that could wind up being the case.

But the US is not just a country, but rather it is a republic. As such the individual states unified to form a single nation, and the founders felt that ALL should have a say in the selection of someone to lead them. If electoral vote were based and aportioned by population, California would have 65 electoral votes instead of the 55 it has now. Some less populated states might get 1 or 2 EV’s instead of the 3–4 they get now. But this is the big thing to remember: If states were given their electoral votes as a portion of their population in 2016, Trump still would have won.

Here is the map that shows the 538 EV’s apportioned by population. Trump still wins with 303 votes!

When the Constitutional convention was held, there were only 13 colonies and only 12 were represented (Rhode Island did not participate). There was no California or Texas yet. But they felt the electoral college would be the best way to select a President….because we are not a democracy, but rather a “democratic republic.”

Ben Franklin said it best when he summarized a pure democracy:

“A democracy is two wolves and a sheep voting on what to have for lunch!”

If only a few states mattered presidential candidates would only Campaign in a handful of states. Because of the Electoral college, they now campaign in almost ALL of them!