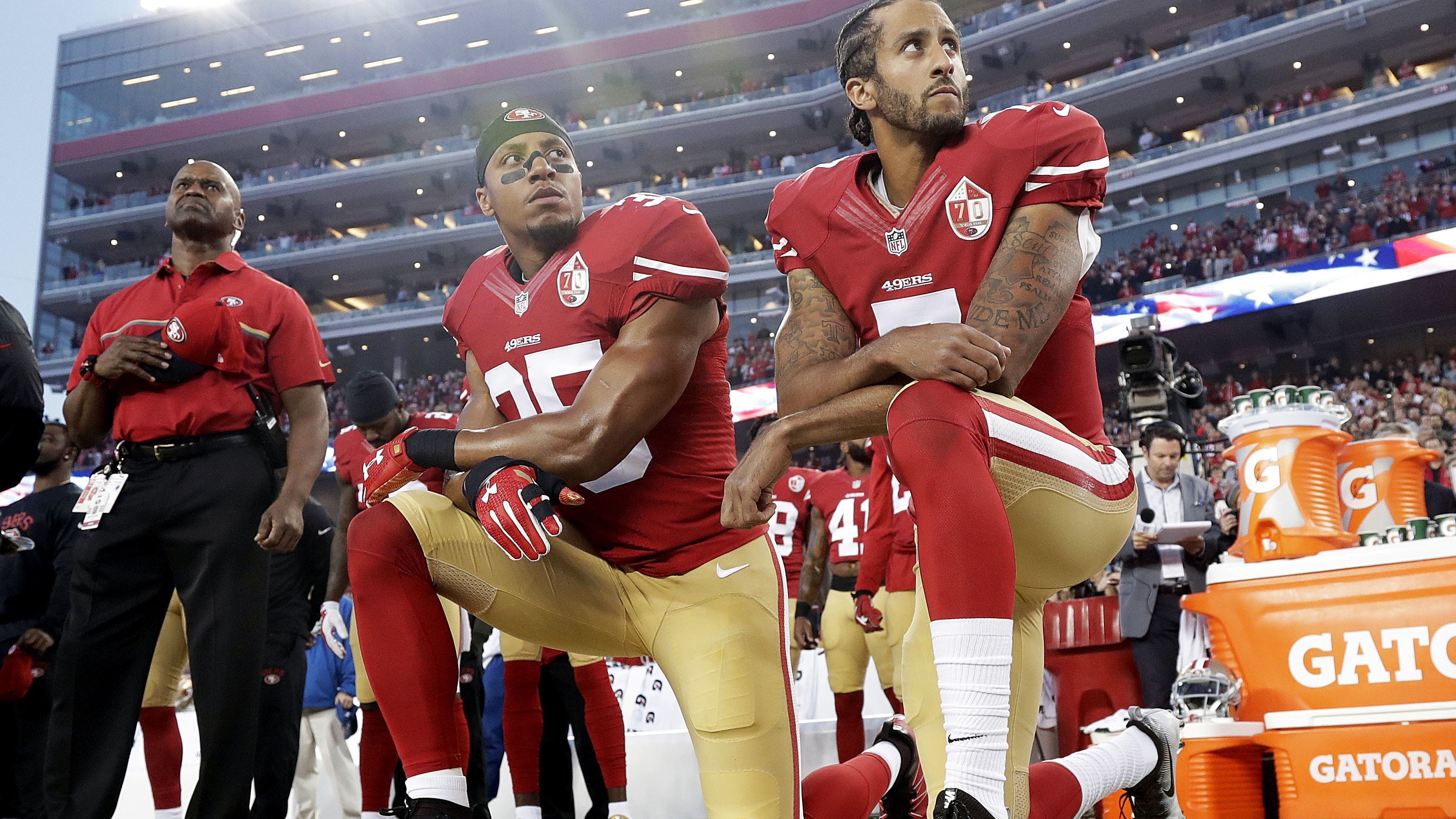 The Face of Disrespect

With so much division today, the only true thread that connects Americans are their citizenship and nationality. We are all bound by one nation under the political ideology centered around the shared values of freedom, liberty, and equality. To be an American doesn’t mean everyone is required to partake in the same racial, ethnic, or religious diversity. It runs much deeper than that; it means upholding constitutional patriotism, liberal nationalism, and the glue that binds all Americans. It’s hard to believe that these were once the ideas that all Americans admired, but with this notion long gone, it sows a sense of division in our country. It’s no secret that Americans are still facing injustices today, but what message are they trying to convey by kneeling for the flag? They are at odds with the sheer symbol that stands for unity and has fought against the splitting of a strong nation. It’s ironic to protest against something that stands against the bigotry and intolerance some citizens face today. Thread by thread, the American flag highlights the blood and toil of the fallen soldiers who have died to protect their freedom.

In 2016, Colin Kaepernick kneeled to the national anthem in response to police brutality and racial injustices and made way for other players to follow his lead. While it may be their intent to turn the stage into a political performance to bring awareness about iniquity, their statements have nothing to do with the flag. Americans stand for the national anthem and the flag to honor what they represent: the highest ideals of the nation and those who died protecting these ideals. The colors of the flag symbolize purity and the valor of those who shed their blood and gave their lives for the players’ rights to protest freely. Instead of using their extensive platform to portray the best of what our nation stands and hopes for, they contrast the justices that the flag has brought to this nation by representing societal failures. While many agree with Kaepernick’s message and statement, they disapprove of his discourteous delivery. Drew Brees, New Orleans Saints quarterback, stated:

“[I]t’s an oxymoron that you’re sitting down, disrespecting that flag that has given you the freedom to speak out.”

Whilst there are times to wisely express their anger for what this country has failed to provide, the national anthem should be reserved for all Americans to appreciate the beacon of freedom and pay their respects to the fallen.

Kneeling further divides and separates the country and causes hatred among their teams and fans. Kaepernick, the notable leader that gave rise to this controversy, has gone so far as to wear socks depicting pigs in police uniforms. Furthermore, he is allowing his fans and other teams to act in the same disrespectful demeanor. Instead of raising awareness civilly, he chastises every single police officer and expects change from wearing pig socks and kneeling. Although he’s protesting against police brutality, his actions strike at every cop that may have no desire to commit any acts of violence. Not to mention, the policemen that he’s rebuking are the same men who provide security at all his games. The police are not engaged in a coordinated campaign to destroy the Black race. Ever since the protests, they have increased the amount of security held at the games to protect fans from the violence that might break out due to the kneeling. Fans show distaste for his actions by committing arson and setting jerseys on fire. Similar to the way Kaepernick acts, it evokes other sports teams to follow, causing countless fans to lash out in rage. The protest divides fans and their sport idols, drawing the attention away from the actual reason people bought tickets. They expected to enjoy the football game and cheer on their favorite teams, not to be aggravated by the amount of disrespect by their idols.

The Montgomery Bus Boycott never denigrated the flag or the anthem. Led by Martin Luther King, he argued that the people who oppress black people are the ones denigrating the flag and what it stands for. The Montgomery Bus Boycott protests themselves took the root of the problem straight to the direct source: the busses. What sense does it make for protestors objecting to police brutality to take their battle to the football field? If it wasn’t evident enough, the football stadium is not the root problem of police brutality and inequity for Black Americans, which goes to show how flawed and misdirected the movement is. The fact that Americans can disrespect the flag and the anthem is enough to certify that they are free. Tyrannical countries with oppressive governments don’t allow their citizens to openly criticize public symbols, much less earn millions of dollars while doing so. In countries such as North Korea or Iran, citizens' rights are nowhere near the same level of freedom that Americans take for granted daily. Americans should not fear the government for expressing their beliefs, but they should respect the very symbol that has allowed them that privilege.

The controversy of this topic skyrocketed and has caught the public eye after President Trump tweeted out, “The issue of kneeling has nothing to do with race. It’s about respect for our Country, Flag, and National Anthem. NFL must respect this!” Because of this tweet, many are swayed to do the complete opposite of what President Trump agrees with-- instead of standing, they’ll take a knee to personally direct their distaste towards our president. This mindset is incredibly illogical and deters their movement from its original purpose: protesting against police brutality. It is comical that the teams who support kneeling think they are personally attacking President Trump. It has no impact on our president whatsoever; it will only hurt our country and separate all Americans from their goal of being united. The flag represents all Americans, not the President nor the abusers. It stands to remind all citizens of the peril and ugliness as well as the innovative successes. The Pledge of Allegiance is not a pledge to the government, it’s a pledge to our nation and a pledge to never forsake the promise of freedom.

Kneeling, ultimately, does not convey a message about the government or the country. It spreads a message about the entire country and demonstrates how “We the People” are no longer “we.” We’ve become so scattered, even disagreeing on a symbol that is intended to fight against division and uphold the principles of freedom. In the long run, kneeling is more a statement about people who choose to disrespect the flag rather than the faulty government. Rather than appreciating the blessing of a great nation, citizens have decided to remain ignorant about a country that works to correct its flaws and ungrateful for the opportunity and freedom that this country has given all its citizens.