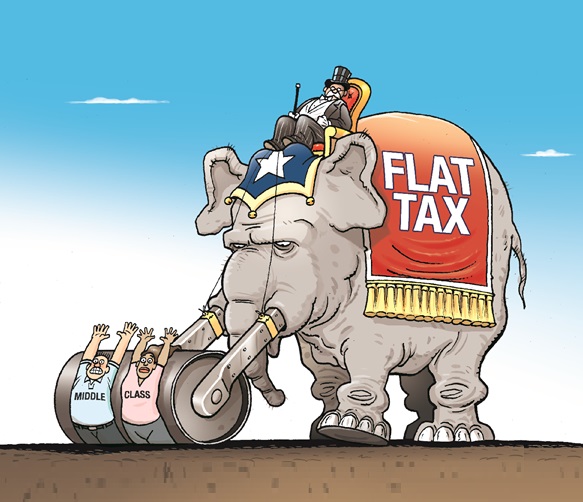 Since the release of President Trump’s alleged tax returns where the New York Times claimed he paid $750 in federal income tax there has been a lot of talk about how the rich get around paying taxes with legal deductions. America and other countries like Canada have a progressive income tax. In a progressive income tax system rates climb as you make more money. Alternatively, in a system with a flat tax, everyone pays the same percentage of their income in taxes (which is normally lower). The main drawbacks of the progressive system are the high cost of compliance and a disincentive for those who want to make more money.

Tax day is a date that many dread as the U.S tax code is a heavily complicated document and the average American will take 13 hours to complete and file their returns. Since the signing of the Tax Cuts and Jobs Act (TCJA), Forbes found that the U.S tax code has become over 75,000 pages long. The tax code is littered with complicated rules, loopholes and deductions that slow many taxpayers down and only really benefit the rich who can hire expensive lawyers to understand the jumble. Eliminating this with a flat tax and cutting deductions and complicated loopholes would allow for faster fillings, a better understanding for taxpayers and could lead to the defunding and or elimination of the Internal Revenue Agency’s (IRS) 11.8 billion-dollar budget.

Many proponents of the progressive tax system say that it’s fairer as the more money you have the more you should pay. However, the assumption in this argument is that if you make more money it is not because you worked harder or made better choices it is because you have somehow exploited the system or your workers through voluntary transactions. To explain the unfairness of the progressive income tax here’s a story. Let’s say there are three brothers, they all have the same IQ, same education, and the same opportunities yet they made different choices. Each one had the same job that paid them $25 an hour. The first brother Bob chose to work 20 hours a week and his wife decided not to work, the second brother Darrel worked 40 hours and his wife worked part-time, and the third brother Harry worked 60 hours a week and his wife worked full time. Bob and Darrel spent all of their money and didn’t save for retirement as they paid into social security. Harry did the opposite he decided to save money every month and invest it into stocks and bonds. At the end of the year, these were the family’s incomes. Bob made $25,000 per year, Darrel 75,000, and Harry $150,000. One day the family’s decided that they wanted to build a pool, and each decided to invest 10,000 dollars into the construction. Harry thought each party would pay equally $10,000 per family. However, the other brothers disagreed. “Why should I pay the same as you, I don’t have that much and you do,” said Bob “that’s because I chose to work more and save my money, why should I be penalized for that?” said Harry”. Darrel chimed in, “our total income is $250k and 30,000 is 12% of that, how about we each pay 12%,” said Darrel (this is a flat tax). I have a better solution said bob “Harry pays $23,450, Darrel pays $6,550 and I will pay nothing”. This here is the progressive income tax based on the U.S tax code and in this case, it doesn’t seem very fair, does it? If you were told as a child that if you want to work harder or make more money than it would be stolen from you by the government, why would you want to work hard. This idea has been confirmed by a Harvard study done by Martin Feldstein where he found that high taxes and taxes, in general, have a large impact on consumer activity and a person’s work patterns. In the story I showcased Harry is the one who will be creating jobs as he is the one with capital to invest in people. An example of this is daycare. Since both parties in Harry’s family are working they will have to hire a Nany and invest in a daycare which creates jobs. Compared to Bob who frankly doesn’t provide anything to the society or the economy and is in fact a burden. Why should people like Harry subsidize the lives and choices of others at the cost of themselves and others?

There are a few other advantages that the flat tax has over its competitor the progressive tax. The first is its economic benefits. The most prominent flat tax plan in the U.S is Senator Ted Cruz’s plan from when he ran to be the Republican nominee in 2015. Cruz’s plan calls for a 10% income tax and a 16p% business tax that would end up reducing government revenue by 768 billion over 10 years while also creating numerous economic benefits. The independent U.S tax foundation found that the senator’s plan would cut taxes for the average person by 9.2% creating 4.8 million full-time jobs and which in turn would raise GDP by 13.9 percent provided that the tax cut could be appropriately applied. Worldwide 20 countries currently have a flat tax rate many formerly soviet controlled. Estonia was the first who implemented a 26% tax rate in 1994 just a couple of years after the fall of the Soviet Union and were followed by many other former Soviet States. In 2001 Russia seemingly learning from its neighbours followed suit and decided on a 13% flat tax rate and a reform of its system eliminating many deductions and loopholes. Russia’s tax cuts have led to a huge increase in tax revenue since everyone is paying the actual rate. The second benefit of the flat tax is actual tax competition. Estonia is lowering its rate to keep pace with other nations. Estonia’s rate dropped from 24% and to 20% in 2007 and Lithuania is also in the process of lowering its 33% flat tax to a more reasonable 24%. With this, the Latvian government is now wanting to reduce its tax rate from 25% to 15%. Finally, a flat tax will cut government involvement in the economy and enhance individual liberties. If the progressive income tax is eliminated politicians would no longer be able to pick winners and losers, reward friends or donors, and use the tax code to push more government involvement into the economy. Along with this, the government would no longer need to know the intimate details of each taxpayer's financial assets.

In conclusion, the flat tax is the best alternative to the progressive income tax in a time where the world sees taxation as a necessary evil as it is better for the economy, doesn’t dramatically disincentivize work, creates jobs and enhances individual liberties and freedom.