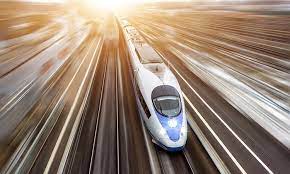 The Future of Trains in America

In the 19th century, the United States began to modernize its lands through the construction of railroads. The new steam engine technology, brought forth by the Industrial Revolution in Britain, allowed the United States to better integrate its new Western territories. The Civil War also demonstrated the military capabilities of these trains, and, more importantly, how a strong infrastructure network could transform America.

If the 1800s were the century of trains, the 1900s were the century of cars; cars quickly became integrated with American cities, and new revolutionary production methods (such as the assembly line) could allow for cars to become more affordable for the average population. In European cities, the infrastructure and roads were largely based on hundreds of years of horse travel, and trains had already become such a key part of European transportation networks. The car took on a greater role in America, and they acted as an important symbol as well: the individuality and self-autonomy that could be afforded with the car simply didn’t exist when trains were invented. The car symbolized a new sense of freedom and liberty that quickly made it the vehicle of choice for travelers.

Trains became truly replaced by cars after the end of World War II when America began adopting a program similar to Germany’s “Autobahn” system: a network of federal highways were constructed throughout the 1950s after the passing of Eisenhower’s Federal Highways Act. The act represented a true shift from trains to cars, and companies began to purchase old railroads for the purposes of building highways. Big oil and car lobbyists pushed for the dismantling of rail systems and the construction of more highways.

In the modern-day, we’ve seen the maintaining of the highway system for several decades, and despite a degrading in current infrastructure and an urgent need for repair, the car remains the most dominant form of transportation in the United States. In 2019, 86% of American commuters used their car to drive to work. The heavy presence of car culture in the United States, however, has simultaneously created problems with congestion, pollution, and efficiency. Every gallon of gasoline burned produces around 8,887 grams of carbon dioxide, all of which contributes to greenhouse gases and climate change. Traffic congestion doesn’t help either, as it wastes productive time for many busy Americans, all while cars continue to emit gas waiting for traffic to clear up.

However, in the 21st century, the promise of high-speed rail has become more widespread around the world, particularly in other developed nations. Japan famously created its first high-speed rail network — the Taikaido Shinkansin — after years of opposition and delay. Europe began to slowly modernize its rail systems throughout the 21st century, upgrading its trains, expanding rail, and using the interconnectedness of the European Union to create a more powerful train system.

America’s long-standing, rising rival — China — also managed to increase its high-speed rail network throughout the 21st century. In 2008, less than 500 kilometers of high-speed rail was being constructed, with the only existing rail existing from Qinhuangdao to Shenyang. However, in 2021, China now operates over 38,000 kilometers of passenger rail and currently dominates high-speed rail development, owning about two-thirds of all high-speed rail in the world. This high-speed rail has brought numerous benefits to China: commute times became quicker, and there were easier ways for people and goods to be shipped between China’s various cities.

With the world seemingly adopting this new form of transport that many had considered replaced by the car, should the United States begin making this same transition? The answer is a resounding yes; the benefit from high-speed rail would far outweigh the costs, especially considering the infrastructure for trains already exist.

Not only would it allow for our cities to become more interconnected, but it would also alleviate the stress on bridges, roads, and highways, many of which are in poor condition because of decades without repair. The sheer reliance that Americans have on cars in the modern-day is concerning, especially when pressing climate issues, rampant road decay, economic congestion, and slow commute times are becoming a growing concern.

High-speed rail would bring economic opportunities to starving communities, allowing for a stronger domestic economy and a more robust infrastructure system to go along with it. Trains have the unique benefit of being incredibly efficient: Japanese and Chinese rail systems both prove that large economies of scale can maintain a train system with little to no delays. Amtrak, America’s top train service company, already has plans to expand high-speed rail in the Northeast, and President Joe Biden’s allocated funding for new train networks is likely to go directly to high-speed rail.

High-speed rail is an obvious investment in America and would allow us to turn away from decades of ignorant funding into highways and interstates. More Americans would have an easier time getting to work, and the funding already outlined in Biden’s new infrastructure plan would be a foundation for years of new high-speed rail construction in the future.