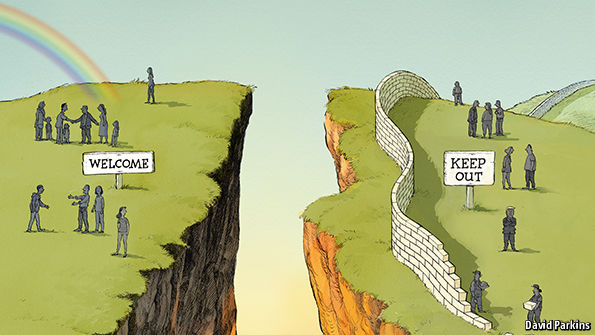 In the past few years, the United States has seen more political divisions and radicalizations than it has in recent history. We hear this a lot, but it is very factual and significant to say that the United States is at a political crossroads. The divide between the two major parties, Democrats and Republicans, has never been wider. Likewise, divisions are becoming clearer within the two parties themselves. Specific growing radical ideologies paint an entire wing of the political spectrum in a bad light. This growing issue is fostering separatism and political unbalance. Surprisingly, there are still only two major political parties in the United States, especially with how broad the veils are for each. It is hard to believe that people like Bernie Sanders and Hillary Clinton belong to the same party, just as it is difficult to see how people like Mitt Romney can belong to the same party as people like Donald Trump and his followers. It is even more surprising that neither of these two parties has fractured.

As for the Republican Party, it is no doubt that the coalition's loudest voices have transformed the party in front of our eyes. Leading Republicans have made a moderate, conservative, pro opportunity party into one of loyalism, populism, and nationalism. The main issue is that a large number of people who identified with the old Republican Party do not agree with where the party is heading. Many notable Republicans have adopted this stance this year, voting for Joe Biden in the 2020 general election and voicing their disdain for populist Republicans like Donald Trump. This last point is what drives me to believe that a rift is imminent in the Republican Party. There are three significant factions that a fractured Republican Party could break to become. The first is a smaller but extremely vocal Christian National Populist Party, headed by people like Donald Trump. This hypothetical coalition is one that has never fit underneath the Republican label. It would be one that advocates for restricting immigration, conservatism, and putting America first. It is one that will exist because it is vocal and because the figures appear strong and confident. A split like this could trigger an exodus of more liberal and small-government Republicans to the already existing Libertarian Party. This shift would grow and change the party, perhaps making it more moderate while still retaining some of the Libertarian ideals that brought us our independence. The remaining, smaller Republican Party would be center-right and reminiscent of the one we seem to have lost. It would emphasize economic prosperity, equal opportunity, and personal liberties.

The Republican Party is far likelier to experience a fracture as dramatic as this, but the left-leaning Democratic Party is not safe from a similar scenario. Similar to the Republican Party, the last few years have exemplified a growing radical minority within the Democratic Party. Vocal, Democratic Socialists who are anti-establishment are winning positions of power and causing chaos in the streets, all under the veil of the Democratic Party. A split from the more moderate majority is arguably inevitable. A Squad, as they put it, is growing significantly in the House of Representatives. In the 2020 election, this coalition doubled in size as like-minded and younger members were elected to the legislature. The Squad, now numbering between eight and ten, is primarily made up of young minorities who hold views further left than what is mainstream in the United States political climate. The Green New Deal, higher minimum wage, and a bigger, more involved government are all policies heavily peddled by this group.

The Squad's de facto leader, Representative Alexandria Ocasio-Cortez (D-NY), recently charged this divide after Joe Biden won the presidency. She called the Democratic Party out on incompetence, failure to act on issues, and progressive scapegoating following embarrassing swathes of imperative Congressional defeats for the Democratic Party. There is no doubt that the divide is widening between moderate and progressive Democrats, and it will continue to widen as the apparent truce between the two is now over following the conclusion of the 2020 presidential election. A vocal, progressive party is likely to split dramatically from the mainstream Democratic Party, as tensions between the two halves within the party already resembles tension between two separate ones. A smaller and further left party could also fracture during this dramatic split, preaching socialist values and uprooting the American systems. It is unlikely that this party will be popular with many or come through on any of their promises.

Shifting demographics between the political spectrum will likely supercharge these already imminent divides. Exit polls and surveys have shown that Donald Trump, and the Republican Party as a whole, had made significant headways into winning votes from traditionally Democratic voter groups. Trump’s incredible performance with Hispanic voters in Florida in the 2020 general election, specifically in Miami-Dade county, made a statement. That statement is that Republicans have put in significant effort to appeal and gain nonwhite, women, and college-educated voters as the Democrats have taken these groups' votes for granted and likely will continue to. The Democratic Party took the so-called blue wall of Wisconsin, Michigan, and Pennsylvania for granted in 2016, costing them the election. It is no doubt that a similar phenomenon is on track to happen with these demographics as they continue to shift slowly but surely towards the Republican Party. This will be a wake-up call to those who enforce the negative stereotypes that the Republican Party is racist or uneducated.

Likewise, younger, whiter, and less educated groups will continue to shift towards the Democratic Party. Shifts like this are common. The most recent one we endured was the one in

the mid 20th century, which saw a record number of black voters transition parties, creating the wide margin we see today. The divide is beginning to reverse, and as more moderate Republicans start to become mainstream it will continue. This will indirectly change the beliefs of both of these parties and any others that spring from them.

America is going through a momentous change in her political spectrum, whether those changes are visible currently or not, the future will be quite interesting, and we will look back on this time as the beginning. The shift might stabilize our divided political state, or it might make it more divisive. Only time can tell how it will play out. A few things are certain, however. One is that these shifts will continue to widen, most likely towards a breaking point. The other is that the next ten years will define American politics for the next century at least. These shifts and divides, an influx of new, mostly progressive voters, and issues and conflicts becoming exaggerated all over the globe all contribute to this decade's significance.