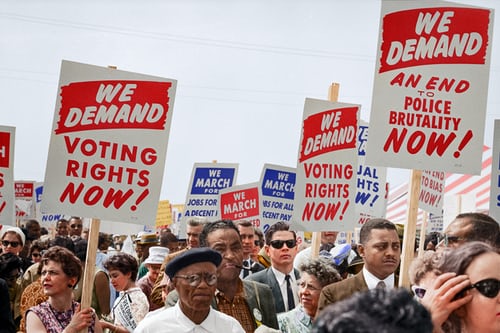 Why Voter Suppression in Georgia Matters

Voter suppression recently has become one of the most hotly debated issues in the mainstream. Initially public debate centered around voter ID laws, with the right arguing that voter ID strengthened election security while the left argued that it targeted individuals who may not have the resources to get identification from the government. There was a clear partisan divide in this issue that manifested itself in state law as more red states tended to have stricter voter ID laws, while more blue tended to have lenient laws. This emphasis changed however during the 2018 election cycle in Georgia, where an up and coming politician was trying to flip the historically red state riding the wave of demographic changes. This politician was of course Stacey Abrams, who was challenging Brian Kemp for the gubernatorial seat. The election was hotly contested with Kemp barely securing the majority at 50.2 percent. The weeks leading up to the election, however, raised many concerns about the validity of the results that would only increase once results came out. Kemp, the secretary of state at the time, had power over many aspects of the election that produced some questionable actions. In the four years prior to 2016, he purged over a million names from the voting list, and held 53,000 voter registrations, a majority of which were minorities in his office, creating voting problems for them (Lockhart). Moreover, polling centers in areas with more concentrated minority populations reported more problems with voting machines losing power, and more traffic as less polling machines were allocated for these sites. After the election, many groups, mainly led by Far Fight Action, filed various lawsuits aimed at fixing voter suppression policies within the state prior to the 2020 election. The main reforms they proposed were an electronic voting system, ending purges of voters, and placing Georgia back into a preclearance requirement which would ensure that any voting requirement change would have to be approved by a judge (Lockhart). Much of what these groups fought for, however, would not be realized as in April of this year, a Georgian judge essentially struck down the lawsuit by ruling against a majority of the provisions.

Despite this initial set back for voting rights, 2021 would bring surprises and more challenges in Georgia. In special elections, Democrats were fighting for the chance to tie and essentially flip the Senate while Republicans were fighting to maintain control. The Democratic candidates would need record high turnouts, especially from minority communities in order to flip a state that historically has sent red senators to Congress. They achieved just that with 4 million Georgians voting in the election, sending both Democratic Senators, John Ossof and Raphael Warnock to victory.

Likely in response to these victories and due to the fact that Brian Kemp is due for reelection next year, Georgia passed a bill creating sweeping voter restriction, which according to CNN include “...new voter identification requirements for absentee ballots, empowers state officials to take over local elections boards, limits the use of ballot drop boxes and makes it a crime to approach voters in line to give them food and water” (Mena). The most telling of these new rules is the one that empowers the state to usurp power from local governments. With this type of power the state could target certain districts that may be crucial in the election and forge voter laws to their favor in order to sway election results. Banning providing water and food to voters poses another major issue as in underserved poll centers, which often tend to be in minority communities, traffic is high leading to long waits in often undesirable weather conditions. Not being able to hand out these basic needs will make these sites even less attractive than they are.

In response to the bill, a variety of groups immediately sued the state of Georgia for what they saw as targeted suppression. Some of these private groups include, New Georgia Project, lack Voters Fund, and Rise inc (Mena). However, as we have previously discussed, private suits rarely make a dent in state laws. The true game changer came on Friday the 25th when the DOJ announced that it would be suing Georgia over its laws as well. The DOJ announced that it came to the decision after viewing that many provisions within the bill were overtly targeting a specific race. This lawsuit will not be the end all be all, however, as it will likely be resolved in time for the next major election. Moreover, federal power regarding voting rights was severely hindered by a 2013 Supreme Court Ruling that struck down parts of the Voting Rights Act that made federal intervention in the state on discrimination grounds legal (Benner). With this established, it is important to look at the importance of these lawsuits. Georgia is one of the most prominent swing states in the country. Democrats view it as a new source of representatives while the Republicans hope to maintain it as a reliable Red state. A rising minority population concentrated in cities like Atlanta has made elections more tightly contested. In the highly divided times we live in, the two senators Georgia sends to congress may very well decide which party retains control, similar to what happened in 2021. What is more significant however is the precedent bills, like the one passed in Georgia, could create. Voting is the most sacred instrument in our republic. Any suppression of votes is fundamentally against the pillars that created the nation. If more states, especially highly contested states whether they are blue or red, choose to suppress certain groups that are in not favor of them, we can have an even more partisan and divided environment. As I previously stated the fruits of these lawsuits will probably not be realized before 2022 when more significant elections occur. But that does not mean that there is nothing that can be done to stop this from becoming a trend. Being more active in local politics is key to ensuring the state legislature truly represents the people with its bills.