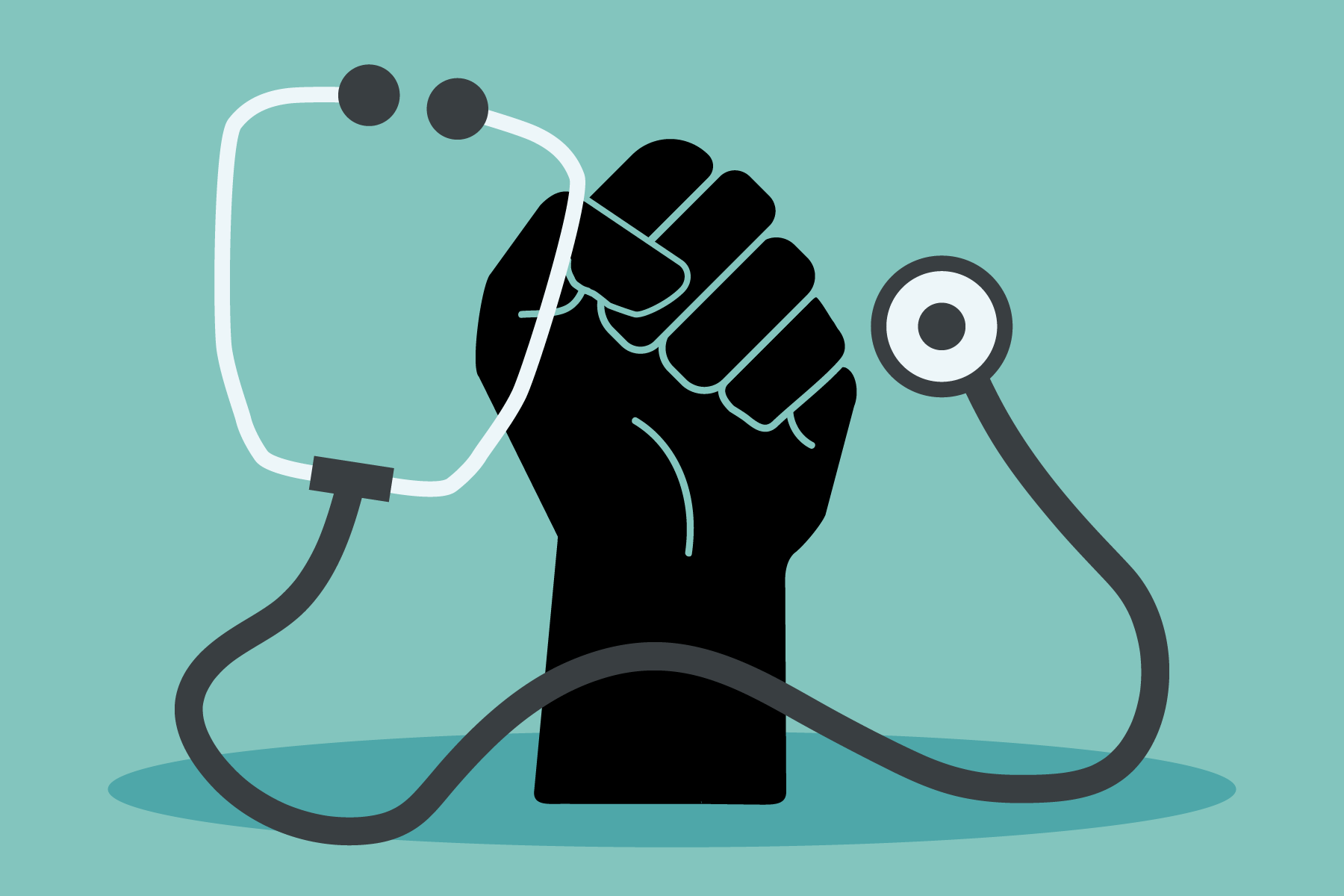 Both structural and interpersonal racism play a major role in perpetuating the racial disparities in the American healthcare system. Racial minorities are disproportionately negatively affected by difficulties in healthcare access, treatment, and costs: all of which have consequences in the overall well-being of minority communities. In this brief, we examine the extent to which racial disparities affect American society and the efficacy of policies implemented to reduce them, such as Medicare, Medicaid, and the Affordable Care Act.

The CDC defines health disparities as “preventable differences in the burden of disease, injury, violence, or opportunities to achieve optimal health that are experienced by socially disadvantaged populations.” Health disparities exist between the rich and poor and between women and men, but most notably occur between white individuals and people of color (POC). Racism—as defined  by the CDC, is “the structures, policies, practices, and norms that assign value and determine opportunities based on the way people look or the color of their skin”—has existed in America since the country’s founding  and has lasting negative effects. Both interpersonal and structural racism affect the access to, and quality of, healthcare for minority groups in America. Even when insurance status, income, age, and health are accounted for, racial and ethnic minorities receive lower quality care. There are a plethora of reasons why this may be, many of which we will discuss in this brief.

The racial gap in healthcare quality has been illuminated by the ongoing COVID-19 pandemic. According to the CDC, Black individuals had about the same number of cases as their white counterparts, yet had 2.5 times as many hospitalizations, and 1.7 times the amount of deaths. These statistics were similar for Hispanic individuals and even more concerning for those identifying as Native American—3.2 times more hospitalizations and 2.2 times as many deaths. These inequities are largely due to unequal access to healthcare for minority groups.

Criticisms surrounding this unequal access are often directed towards individual physicians—but this rhetoric ignores the structural racism that exists in our modern healthcare system. The effects of slavery and other acts of oppression are long-lasting—counties and states that had larger enslaved proportions of the population in 1860 have greater present-day inequalities in poverty and economic mobility—which affects access to insurance and high-quality care.

The economic disadvantage that people of color (POC) have faced for years affects their ability to get high-quality healthcare today. Many minority workers are employed in low-wage jobs that do not provide health coverage—around 66% of white workers are covered by employer sponsored health insurance, as compared to 47% of black, 43% of latino, and 37% of native workers. In addition, these workers are often covered by lower quality plans that increase their out of pocket (OOP) expenditures. Attempts to mitigate these inequalities have been largely unsuccessful, likely due to a misunderstanding of the causes behind them.

When looking at America’s federally financed healthcare programs, i.e. Medicaid and Medicare, racial inequities are evident. Medicaid plays a large role in ensuring minority populations—around half of non-elderly Medicaid beneficiaries are members of these groups. Between 2014 and 2018, minority enrollees reported significantly worse experiences with access to care than white enrollees.

The racial inequities in healthcare have been a historical occurrence that has continued to plague the current American healthcare industry. For instance, in 1946, the federal government enacted the Hospital Survey and Construction Act, commonly known as the Hill-Burton Act, to provide for the construction of public hospitals and long-term care facilities. Although the act mandated that health care facilities be made available to all without consideration of race, it allowed states to construct racially separate and unequal facilities.

In 1965, President Lyndon B. Johnson signed into law the bill that led to Medicare and Medicaid. Medicare is an insurance program that primarily serves the elderly and the disabled. Medical bills are paid from trust funds that have been paid by those who are covered. The original Medicare package only included hospital insurance and medical insurance, but efforts throughout the years have expanded these programs to cover more people in need. For instance, in 1972, Medicare was expanded to cover the disabled, people with end-stage renal disease (ESRD) requiring dialysis or kidney transplant, and people 65 or older that select Medicare coverage.

On the other hand, Medicaid is an assistance program that serves low-income people of all ages. Patients usually pay no part of costs for covered medical expenses. Originally, Medicaid only gave medical insurance to people getting cash assistance. Today, coverage is extended to groups such as low-income families, pregnant women, people of all ages with disabilities, and people who need long-term care.

There were several additional provisions put in place, such as those aimed toward cost containment, improving health system performance, and an increased emphasis on prevention and wellness. The ACA was seen to reduce racial and ethnic disparities in coverage, although substantial disparities still remained. In 2013, before the main provisions of the ACA were put into effect, 40.5% of Hispanics and 25.8% of Blacks were uninsured, compared with 14.8% of Whites. After the main ACA provisions went into effect in 2014, insurance coverage disparities declined slightly as the percentage of adults who were uninsured decreased by 7.1% for Hispanic Americans, 5.1% for Black Americans, and 3% for White Americans.

Coverage gains were greater in states that expanded Medicaid programs. Some studies suggested that the ACA’s provision to expand Medicare coverage to low-income adults, was associated with narrowed disparities in health outcomes for Black and Hispanic individuals, particularly for measures of maternal and infant health. Although this helped to reduce racial disparities, it did not eliminate them.

Insurance companies are profit-driven, which often leads to companies placing a greater focus on profits than affordability. This contributes to the difficulty of low-income patients and racial minorities to obtain adequate healthcare coverage. Additionally, insurance companies may have tighter regulations against preexisting conditions so that mostly healthy individuals are selected for their plans.

Pharmaceutical companies are also influential in the healthcare industry, as they are the producers of drugs that patients rely on. Due to the lack of price caps and competition on many drugs, drug prices have a tendency to rise to exorbitant levels, making it difficult for low-income patients to afford them. Hence racial disparities in treatment access are also reinforced.

Growing research has suggested that racial disparities in healthcare have profound impacts on quality of life, education, the workplace, wealth, and employment opportunities. These social determinants of health are not only affected by racial disparities, but can also further contribute to existing disparities by driving both structural and interpersonal racism. When a major public health crisis like COVID-19 strikes, these inequities are not only fully exposed, but also exacerbated. Older Black, Hispanic, and Native American/Alaska Native adults were nearly twice as likely to die of COVID-19 as older White adults.

Aside from the COVID pandemic, racism in healthcare deprives the healthcare industry of the full breadth of minority talent and expertise. Currently, African Americans, Hispanics, American Indians, and certain segments of the nation’s Asian/Pacific Islander population are not present in significant numbers in the health professions industry. A report conducted by the Sullivan Commission found that cultural differences, a lack of access to health care, combined with high rates of poverty and unemployment, contribute to the substantial ethnic and racial disparities in health status and health outcomes.

The racial disparity in healthcare access and quality can at least in part be explained by structural racism, which is defined as “the totality of ways in which societies foster racial discrimination through mutually reinforcing systems of housing, education, employment, earnings, benefits, credit, media, health care, and criminal justice.” Although the Civil Rights Movement has outlawed de jure segregation such as Jim Crow laws, lynchings, and slavery, racism still persists and is exhibited through de facto segregation such as racialized mass incarcertaion, residential segregation, and voting disenfranchisement.

This structural racism is demonstrative in that counties with higher concentrations of slavery prior to 1860 are currently associated with slower declines in heart disease mortality among Black Americans in recent decades, an association partially explained by intervening socioeconomic factors. Additionally, counties and states that had larger enslaved proportions of the population in 1860 have greater present-day inequalities in poverty and economic mobility. On the state level, structural racism is associated with higher rates of infant mortality, myocardial infarction, functional limitations, depression, higher body mass index, and worse self-rated health among Black people.

Although racial disparities in healthcare have gotten more attention from policymakers in recent years, there is much division on how to remedy the situation. Some believe the issue can be remedied simply by raising public and provider awareness and holding individual physicians responsible for their racist behaviors. The level of awareness for both providers and the public rose sharply in the early 2000s due to efforts in this area. Others believe the issue can be remedied by an expansion in the number of healthcare providers in underserved areas - although this solution fails to address the insurance and quality gaps between POC and white individuals. There has also been a (somewhat recent) proposal that facilitating an increase in minority health professionals could help close the gaps in quality of care for POC. Though there is not much evidence in either direction for this proposal, it is worth consideration.

Years of policy decisions have contributed to worse healthcare outcomes for people of color. Although the COVID-19 pandemic exacerbated this issue and brought it to the attention of the public, POC have been affected by this since the beginning of American history. Insurance and pharmaceutical companies, as well as healthcare providers and politicians, play a role in the persistence of this issue, and they can facilitate its solution. This is not an individual issue, it’s systemic, so it will take a large, forward thinking communal effort to reduce the effects of structural racism in our healthcare system.