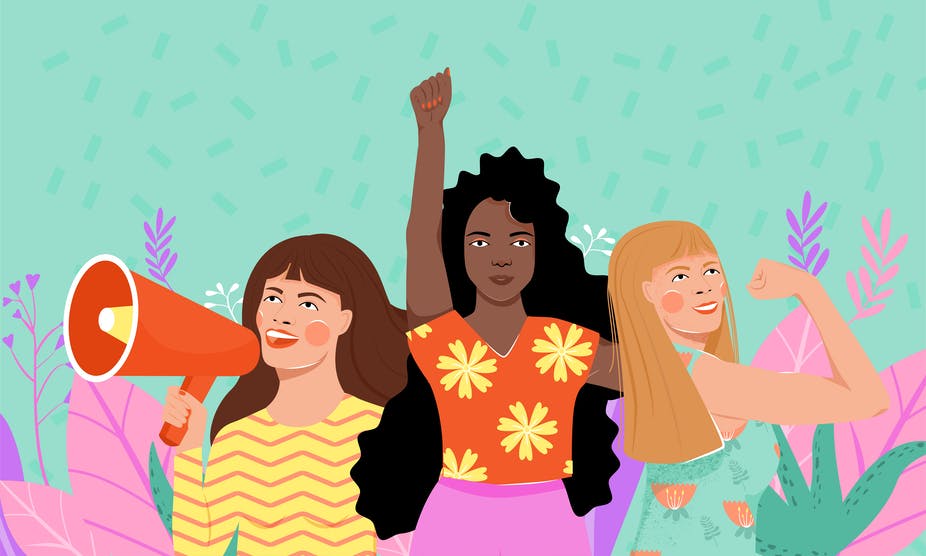 “Feminism No Longer Stands for Everything it Used To”

To fully grasp the depths of this statement, we must discuss the original goal of feminism and make distinctions of such to the contemporary feminist idealogie. Feminism was founded on the idea of gaining political, social, and economical equality of the genders. Before the 19th century, women were disregarded and were not seen to be as capable as men, in every aspect. Reforms started in the mid 19th century leading up to the 20th century when Elizabeth Cady Stanton, principal organizer of the first Seneca Falls Convention, arranged the first gathering devoted to women’s rights. Along with her, the primary feminists and suffragettes that stimulated the feminist movement were Alice Paul, Susan B. Anthony, and a handful of other suffragettes. These women were pro-life and worked to address the root causes that drove women to abortion. They also fought for the right to vote and encouraged many women to defy the destructive boundaries that have been set for them by society. Needless to say, the prominent and powerful movement of the first wave characterized many various forms of intervention that will continue to incline later feminist movements such as the second, third, and possibly a shadow to the fourth wave.

Let’s hone in on the key elements and influential figures in each wave that caused feminism to spiral from its original aspect. The second wave drifted towards rejecting gender roles and refused to include motherhood as a goal, contrasting the original feminist ideologies of the first wave. Turning into radical feminism, they believed it started with a presimse that women oppression is the most fundamental oppression and that gender distinction will be used to create hierarchy. During this time, a feminist named Betty Friedan issued a war cry for equal opportunities in workplaces and published a book that has been credited for sparking the second wave. In Friedan’s book “The Feminine Mystique,” it is pivotal to point out that Friedan never indicated that abortion or contraception as means to liberate women. Contrary to popular belief, she believed that marriage and motherhood would benefit women, standing from a non-religious viewpoint. After her published work, she admitted that she did not emphasize the importance of marriage and motherhood as much as she would’ve liked. Her beliefs, at the time, remained consistent with the first wave of feminists. The original feminists agreed that abortion was wrong and was used by men to control abused women, a sign that indicated female oppression.

Hijacking Betty Friedan’s women’s movement was the Sexual Revolution, embodied by Hugh Hefner, his notorious Playboy magazine, and detestable men such as Larry Lader and Bernard Nathanson. Helen Gurley Brown felt empowered by Hefner’s vision of sexualizing women and transformed the Cosmopolitan Magazine into a sex magazine, akin to the Playboy Magzine for women. Helen Gurley Brown’s solution for “ideal” women was that hard work and abundant sex without getting married would set women free. What kind of women empowerment mooches off of men's fantasies of sexualizing women (corrupt men, that is) and feeds it vulnerable young women? It’s ironic and hypocritical that this movement is actually controlled behind the face of powerful men and acted out by gullible women to promote the inclusion of all feminists. That goes to show how far the movement has digressed away from it’s goal of “political, social, and economical” equality for women. Instead of helping women obtain their rights, the movement is sexualizing women and feeding into society’s narrative to treat women as sexual objects. Sidetracking from Betty Friedan’s goal of marriage and motherhood, this movement reminded women that motherhood and children are an insurmountable “obstacle” to women’s freedom. It is revolting how they use the word “obstacle” as a means to convince women that having children will victimize them further and set them back in life. Betty Friedan, the sparking face of the second wave, commented that the magazine was “quite obscene and quite horrible,” which will be a contradiction to her beliefs later on (will be discussed further below). Larry Lader and Bernard Nathanson, both overly powerful men, legalized and mass marketed abortion during the Sexual Revolution all across America. Concerned with the overpopulation, they together started the abortion rights movement and NARAL (National Abortion And Reproductive Rights Action League). Lader and Nathanson were very well acquainted with Margaret Sanger, another racist KKK advocate who started Planned Parenthood with the intent of reducing the black population. Alan Guttmacher later took over Planned Parenthood and began publicly advocating for the mass legalization of abortion. These organizations are viewed today as non profit organizations that uplift and support women to help them achieve their rights. But many stay quiet at acknowledging the fact that it’s run by affluent men such as Guttmacher, Lader, Nathanson, and could really care less about women’s rights. Starting to notice a trend of men using women to feed into their money making schemes?

“If we’re going to move abortion out of the books and into the streets, we’re going to have to recruit the feminists. Friedan has got to put her troops into this thing.” -Bernard Nathanson

These were the actual words which can be found in Nathanson’s book “Aborting America,” which openly admits to utilizing primary feminists to control the movement. The lies of Nathanson were so successful that they even beguiled Betty Friedan (mentioned above) along with dominant feminst figures in the second wave. In 1967, Betty Friedan contradicted her works for the feminist world by damanding that abortion be established into the National Organization for Women, which resulted in ⅓ of the women quitting the organization.

After dotting the most exemplary point in time when the feminist movement came crashing down, we can only imagine how poorly the movement had departed from the true meaning of feminism. Apparently, the third time’s not a charm. To provide context, the third wave concentrates on helping females that are being victimized by gender-neutral issues. They reject the idea of traditional genders and claim that gender is a spectrum and people should not be tied down to a “man” or a “woman.” They believe in a Hereclitian world instead of a Paramedian World, meaning knowledge is subjective and that people come to ideas and understandings from perspective. Instead of a universal truth, there are instead multiple

truths- subjective truths. “Truth” turns plural and feminists hoped that it would lead into the recognition of differences and the ways it can contribute to the feminist movement. Unbeknownst to them, achieving their goal would only propel them further from the goal of uniting all women. Caring more about the inclusion of men and involving themselves in political affairs that have no correlation to their organization divided women further. Recently, radical feminists have been telling men that they should not exist and if they do, then they must not be straight and/or masculine. Who are women to tell men how to feel and act? But in return, feminists absolutely despise it when men start telling women how to act. This is what is tearing their community apart: the lack of truth. The first wave of feminists had almost identical goals in mind, a universal truth. But now, “truth” is so divided that even the feminists have misplaced what they want to accomplish. Instead of focusing incessantly on what drives women apart, it would be more beneficial to accept all women.

Feminism is not about leveraging which gender is the most superior or “more oppressed.” It’s about inclusion of all women and finding reforms that can relate to all women. It’s 6 decades too late to fix the catastrophe of the Sexual Revolution but it's not too late to ensure that the modern day feminist movement doesn’t transpire down that path. Modern day feminism needs to stop teaching women to scream, flail their arms around, and blaming everyone but themselves for their problems. Victimhood was not the original aim for the feminist movement.