A New Cuban Crisis: The Hypocrisy of the American Embargo and the History of Dissent 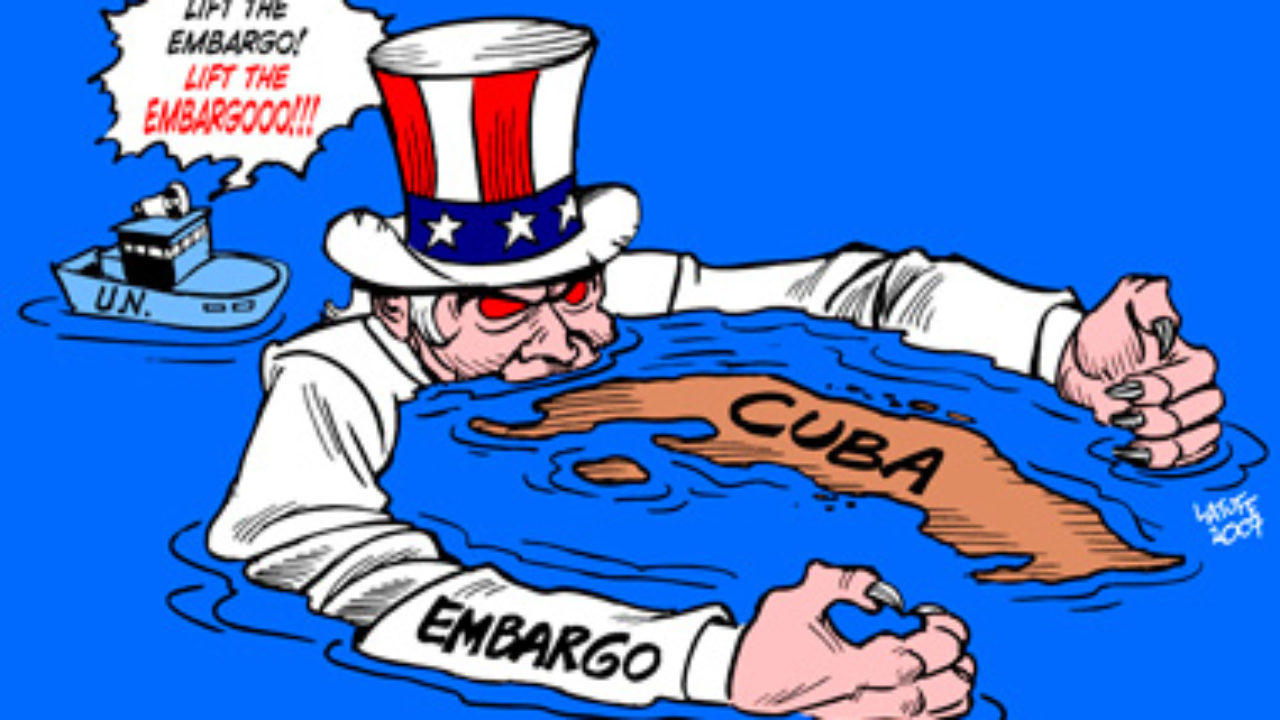 Cuba’s relationship to empire generally and the United States specifically was always dominated by a focus on trade. The logic of Manifest Destiny that dominated American beliefs in the 1800s demonstrated itself in the desire to control Cuba. Specifically, we see this paradigm in the 1854 Ostend Manifesto’s secret attempt to buy the island. After the Spanish-American War of 1898, the U.S. gained economic dominance over Cuba under the Treaty of Paris, which continued even after formal statehood.

U.S.-Cuban relations have been strained since 1962 as a direct result of the Cuban Revolution of 1959, the Cold War broadly, the 1961 Bay of Pigs Invasion by U.S. sponsored terrorists, and of course, the infamous 1962 Cuban Missile Crisis. The standoff between the two countries has continued, despite official diplomatic relations being restored in 2015 and Obama’s 2016 visit being the first in 88 years by a sitting president. The most consistent factor in foreign policy with Cuba, is a total embargo by the United States, barring all economic trade. Biden recently imposed new sanctions to “hold the Cuban regime accountable” for the Cuban peoples protesting against their government. One thing is for certain: the justification behind U.S. actions throughout tens of presidential terms is consistent, even if the diplomatic strategy was not. From Nixon’s opposition to Fidel Castro’s influence on the spread of communism in the Caribbean and Latin America to Trump’s reinstantiation of the Cuban travel ban, the vision for democratic transition molded U.S. foreign policy.

This begs the question: does the U.S. have the grounds to make this justification in the name of democracy? The history of the U.S. response to domestic dissent tells us otherwise. From the political repression of the Black Panther Party’s mutual aid networks by COINTELPRO in the 1970s to extrajudicial killings from Ferguson to Minneapolis to the deployment of the National Guard in Portland during the summer of 2020, American democracy is collapsing under its own weight. The Capitol Riot of January 6th demonstrates a disproportionate response from tear gas and rubber bullets to kind words and apologies in how dissent is dealt with in America. While there were certainly consequences to those who stormed the Capitol, the initial response reveals a broader ‘us vs them’ mentality that undergirds the discussions we have about political repression and democracy as a whole. While many like to contend we live in a post-racial world, the inclusion of the first Black and Indian woman as Vice President as a former prosecutor and the author of the 1994 Crime Bill as President does not count as a metric of progress for the right to speech. In the name of free speech, liberal internationalism was wedded to the ideal of US intervention as essential to global stability and thus individual prosperity. Critics of global repressive regimes must acknowledge the legacy of international colonialism, as well as domestic dispossession, that the United States props itself upon to create the Western order. The annexation of Mexico, proxy power in Latin America, and countless overthrowing of governments through assassination, tampering elections, or military intervention contributed to 783 million people in poverty. The fact that the U.S. overthrew an independent state like Hawaii, intervened in Iran’s 1952 election, Panama’s in 1984, Mongolia’s in 1996, and El Salvador in 2004, just to name a few, tells us that democracy is not the real reason for U.S. embargoes. This is not to say the U.S. is automatically worse than the Cuban government, but to demonstrate the contradictions in our justifications behind which we claim moral high ground over countless countries such as Cuba.

Not only is the U.S.’s stance on Cuban policy hypocritical, it contradicts the policies of the entire world. Just last month, the United Nations almost unanimously voted to have the United States lift embargoes on the island, with just the U.S. and Israel voting against it.

Perhaps even worse, the effects of the sanctions both don’t have an effect on those in power and harm those the federal government claims to be standing in support of. Despite most American media outlets describing protestors as being against a repressive regime, thousands of protestors came out to support the government and reaffirm their stance against American sanctions. The majority of descriptions of protests say they are against the government because of the lack of food and healthcare during the pandemic, which is true to the extent that the government is failing to adequately treat all its citizens. However, the untrue part of many stereotypes about Cuban quality of life is especially applicable to the areas of malnourishment and healthcare. Cuba is the only country in the Americas without severe malnutrition in children, has a lower child mortality rate than the U.S., and is the first country to have eliminated mother-to-child transmission of HIV, all in spite of constant economic sanctions. In the unique situation of COVID-19, the Cuban government had a strong early response to containing the outbreak in 2020, but have faced a recent surge of cases, with 23,093 new cases this February alone, almost twice as many as the whole of 2020. In fact, due to Cuba’s unique government structure, it was able to quickly close its borders and set up isolation centres, which would not work in other countries since not many countries would accept such a level of medical access to information. But, like with all countries, the pandemic is an extreme financial burden to handle for the island. Cuba’s gross domestic product (GDP) reduced by 11% in 2020, and tourists shrank from the normal 4 million to just 80,000. As a result, health infrastructure funding was drastically reduced, supplies ran low, and even when Cuban biotechnology state-run companies like BioCubaFarma, who developed the very first meningococcal B vaccine, were on overdrive, sanctions made it hard to obtain raw materials needed for the development of Cuba’s Soberana-2 vaccine. As a result of this economic hardship, the Cuban government was forced to open borders to tourists to jumpstart the economy, which then led to an exponential increase in Cuban infections. While the Soberana vaccine has been recently introduced and has proven to have a similar efficacy to Pfizer and Moderna at a prevention rate of 91.2%, Cuba is still facing distribution issues and economic downfall that complicate the government’s ability to care adequately for all its citizens, especially since the U.S. embargo has cost them about 130 billion dollars. Given most of the discourse by both Biden and the American media is centered around the Cuban government suppressing its peoples, it seems as though we should be highly skeptical of most claims given that while the majority of the Cuban population may not support the government, they certainly support ending sanctions, which is of course, a democratic principle. We must be careful to quickly write off the failures of the Cuban government as authoritarian routine rather than recognizing sanctions in the midst of an economically devastating pandemic for a highly medically advanced country is not business as usual.

The case for ending sanctions is clear cut in the height of a pandemic, and most media outlets have an incentive to paint protests as being against the regime, instead of actually supporting ending the embargo entirely because of its negative effects. In the midst of think tanks and the non-profit-industrial-complex’s monopoly over acceptable news, look deeper into the opinions of Cuban peoples, even if you might be initially biased against communism. Survey says: yes, sanctions don’t work.