AOC and Ron DeSantis, So Similar Yet So Different 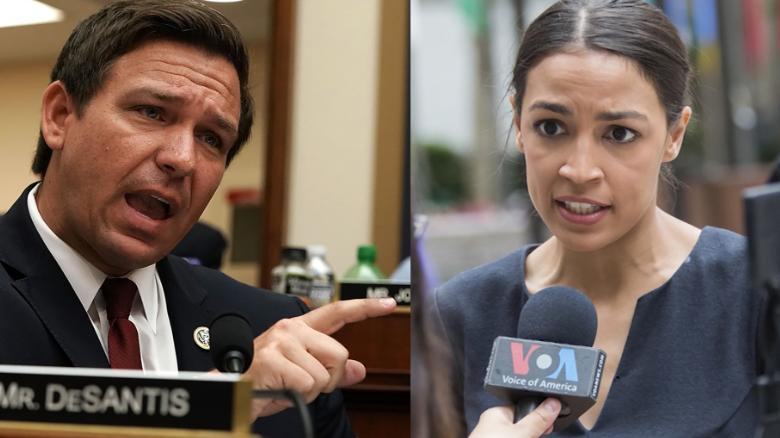 From a policy standpoint, Congresswoman Alexandria Ocasio Cortez (AOC) and Governor Ron DeSantis are polar opposites. Yet, similarities have brought discussion that AOC is to the Democratic party what DeSantis is to the GOP. For instance, they are both fresh faces in their parties and have built up considerable bases in less than a decade at a level most politicians could never hope to achieve in their entire careers. Along with that, both resonate with voters significantly to the point where both are seen as the potential future faces of their respective parties. Finally, both have been speculated to be prospective presidential candidates, with DeSantis even gaining the support of Elon Musk if he were to run.

AOC’s immense appeal across social media platforms such as Reddit, Twitter, and TikTok makes it evident that upwards of millions of progressive Americans support her and her policies. However, progressives with a loud presence on social media are a vocal minority. This is clear in the fact that Bernie Sanders, a well-known progressive, failed to capture the Democratic nomination for president in 2020, losing to Joe Biden, a Democrat who campaigned on being a moderate. When it comes to AOC, she will face the same problem as Bernie Sanders if she were to run for the presidency, as she shares most, if not all, of his progressive viewpoints in a party that has a powerful moderate faction whose votes are necessary to make it to the White House. Meanwhile, DeSantis enjoys widespread support from every faction of the GOP, with the vast majority of the GOP's populist and moderate wings willing to back him if he were to become his party’s nominee for president. While AOC certainly has a chance at advancing her career in progressive areas such as New York City, she cannot win an election that requires a nationwide vote due to her staunchly progressive viewpoints.

When it comes to their track records, DeSantis certainly has a lot more to show than AOC. From his executive order banning Florida schools from requiring masks to signing bills providing billions of dollars in tax breaks to Floridians, DeSantis has changed Florida as a state and established himself as a conservative who can get things done. While AOC has captured national attention through her proposals such as a Green New Deal or a 70% tax policy, she hasn’t been able to get any of these signature pieces of legislation passed, even through a Democratic trifecta. So, although AOC is excellent at introducing her ideas to a broad audience, she has had little success in terms of political change, something that DeSantis has had tremendous success with. Unlike DeSantis, she would have a weak track record to build off of if she were to run for higher office.

The final significant difference between the two rising stars is their respective abilities to appeal to the other side of the political aisle. While AOC has established herself as a favorite among progressive Democrats, she is broadly unpopular among conservatives. On the other hand, DeSantis, while unpopular among progressives, can appeal to moderates, as seen by his double-digit polling lead for his reelection bid. To illustrate this dichotomy further, DeSantis has a disapproval rating of around 24%, while 42% of American adults rate AOC as either “somewhat unfavorable” or “very unfavorable.” These disapproval ratings show that DeSantis’ appeal is much more wide-reaching, giving him the edge in appealing to the other side of the aisle compared to AOC.

Although AOC and Ron DeSantis are both seen as iconic members of their respective parties, DeSantis has much more solid credentials. AOC, while popular and well known, can only find wide-reaching support within her constituency. Both politicians can expect to remain major forces in American politics for the foreseeable future; however, DeSantis will rise much faster due to his wide-reaching party support, strong track record, and ability to appeal to the other side.