Fire in a Crowded Theatre: Discontinue the Irrelevant Rebuttal 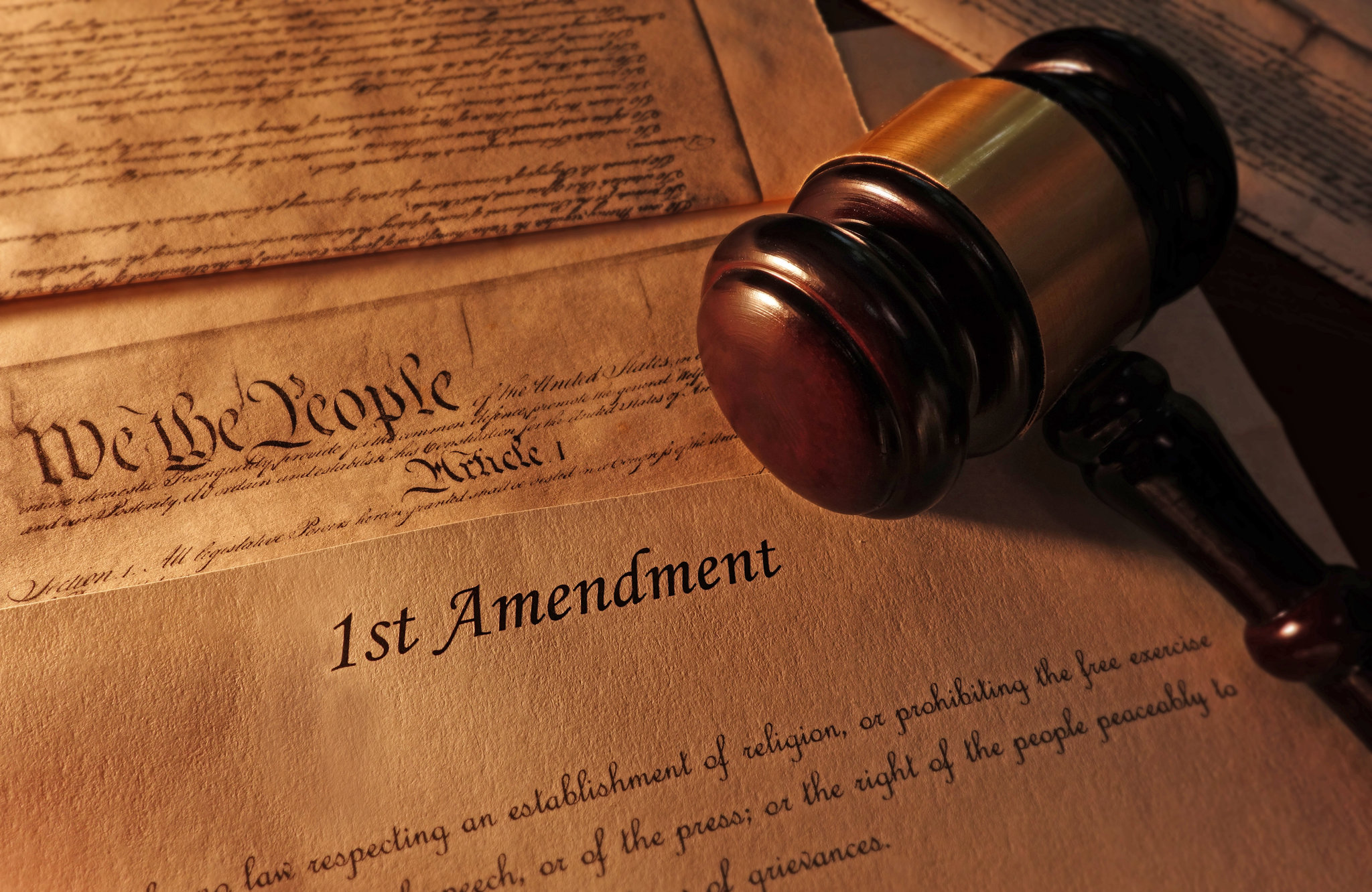 Yelling “fire” in a crowded theatre is the age-old rebuttal to the absoluteness of the First Amendment. At this point, you can just consider any argument null if the arguer uses this fallacious example. This is true even when our public servants and elected officials use this pseudo-semantically overloaded rhetoric. To quote President Joe Biden directly from the White House Briefing Room on the whitehouse.gov website during a speech he gave on Apr. 8, “But no amendment — no amendment to the Constitution is absolute. You can’t yell crowd — you can’t [yell] ‘fire’ in a crowded movie theater and call it freedom of speech” (whitehouse.gov). Through the president’s verbal blunders it is evident that he chooses to contribute to this lie promulgated through a state of demagoguery. The idea that an individual can not yell “fire in a crowded theatre” can appear ethical and founded in reason for safety and conveniencs. As this article will explain, it is a false premise that has been unequivocally disputed in a variety of fashions. Based on the president’s words, it is not wrong to feel obliged to agree with him. However, the usage of this rebuttal to the sovereignty of the First Amendment has corrupted political discourse over the supremity of one of this nation’s most natural, negative, and fundamental rights to her citizens as human beings. Politicians spread this lie as evidence when they are simply spewing disinformation. Neither reason nor logic is being displayed when an individual uses this rebuttal but rather ignorance. The fire in a crowded theatre rebuttal is dangerous to history, education, political discourse, and logic as it is promulgated by popular demagogues and not fact-based speakers.

First let us review the basic, literal verbiage of the rebuttal. For clarification, when the First Amendment is under analyzation of how absolute it really is and someone responds by saying “Well, you can’t shout fire in a crowded theatre”, they are referring to the 1919 case of Schenck v. United States. They are thus implying that the First Amendment is not absolute as they do not believe, for safety purposes, that someone should be able to yell “fire” in a crowded theatre. They probably think that this case unequivocally decided in concurrence with the previously stated. For starters, there is a common misconception with the phrase and a general fallacy just within the wordage that can reveal ignorance, both historically and logically. As Carlton F. W. Larson, J.D. from Yale Law School, points out in the William and Mary Bill of Rights Journal "Shouting 'Fire' in a Theater": The Life and Times of Constitutional Law's Most Enduring Analogy, what if there actually was a fire in a crowded theatre? Could you still yell “fire”? Of course you should, but the phrase would have you believe that the answer is no. See, the actual phrase used by Justice Oliver Wendell Holmes in Schenck v. United States was, “The most stringent protection of free speech would not protect a man from falsely shouting fire in a theatre and causing a panic.” It is historically and logically inaccurate to suggest that someone cannot yell “fire” in a crowded theatre in accordance with the phrase used in the case. However, it would be accurate to the justice’s phrase to instead say “falsely shouting fire in a theatre and causing a panic” as opposed to the popular variation. The intent of the phrase has lost historical accuracy as Larson says, “A Google search reveals over 200,000 hits for “shouting fire in a crowded theater” but only 53,000 hits for the Holmes version.” Larson goes on to state:

On a conceptual level, however, the Holmes version and the paraphrase differ in three significant ways. First, Holmes includes the critical element of falsity, which the paraphrase omits. A person shouting “fire” in response to a real fire (or shouting “fire” as part of his or her lines on-stage) presents very different issues than a person deliberately making a false statement. Second, the paraphrase requires the theater to be crowded. But why does the theater need to be crowded for the speech to be unprotected? A false shout of “fire” that disrupts a performance causes harm to the theater owner and poses risks to the attendees even if only four people are in the audience. Third, Holmes refers to “causing a panic,” thus suggesting a requirement of actual harm, whereas the paraphrase does not. Thus, falsely shouting “fire” in an entirely empty theater might not give rise to legal liability. (Larson)

There are obvious fallacies when the popular phrase is used. There are obvious dangers for interpretation and condemnation. Correct verbiage must be implemented and our political leaders must stop the false appeals to emotion and pseudo-logic.

Next, we will examine the legitimacy behind the rebuttal as a whole and do a key review of the case. As stated by Trevor Timm with The Atlantic, “those who quote Holmes might want to actually read the case where the phrase originated before using it as their main defense. If they did, they'd realize it was never binding law, and the underlying case, U.S. v. Schenck, is not only one of the most odious free speech decisions in the Court's history, but was overturned over 40 years ago.” The case Schenck v. United States actually had nothing to do with the debate over theatres and fires. The case was deciding whether Schenck, who held a major position in the Socialist Party of America, was going to be convicted in violation of the Espionage Act (The Atlantic). The outcome of the case would land Schneck in prison. This court result would become an utter laughing stock within case verdicts. The ruling would eventually plague the court. The era was comprised of authoritarian courts ruling in response to an 11 year old, threateningly new and unpopular Socialist Party of America, who Schenck was secretary for. A circuit that was in opposition to the new party would not be logically cleared from placing a less than sufficient verdict that lacked an obscene amount of unequivocal value. To apply even more doubt to the authenticity of this case and its verdict:

In 1969, the Supreme Court's decision in Brandenburg v. Ohio effectively overturned Schenck and any authority the case still carried. There, the Court held that inflammatory speech--and even speech advocating violence by members of the Ku Klux Klan--is protected under the First Amendment, unless the speech "is directed to inciting or producing imminent lawless action and is likely to incite or produce such action" (emphasis mine). (Timm)

Holmes would later display a key dissent within an exact replica of a case and effectively change his mind. The stupidity, irrelevance, and lacking in structure that this ruling has proved to be is overwhelming. Yet, it is continuously flowing from the mouths of anti-First Amendment speakers. But hey, what is more effective than a seemingly irrefutable and logical statement, even if it is provenly misleading.

This path of gaslighting and demagoguery is fairly frightening for the future of a nation founded on liberty and individual rights. It highlights both ignorance and an utter disregard for truth as power dynamic politics are given the upper hand. As inflammatory, seemingly insightful speech is promulgated history becomes null, logic becomes excused, and political discourse becomes frighteningly corrupted. This assault on the First Amendment should not be tolerated.

Carlton F.W. Larson, "Shouting 'Fire' in a Theater": The Life and Times of Constitutional Law's

Timm, Trevor. “It's Time to Stop Using the 'Fire in a Crowded Theater' Quote.” The Atlantic,