The Flaws of Affirmative Action 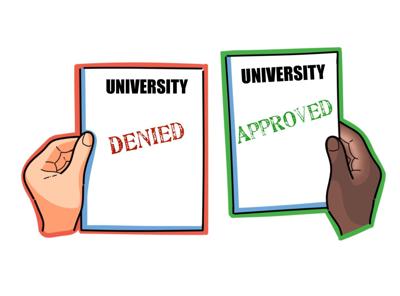 At its core, affirmative action is a name given to sets of policies that grant artificial advantages to historically marginalized groups in an attempt to correct those discrepancies. Most colleges and standardized testing and evaluation practices across the United States use policies like this. Quotas, identification questions, and preferential admission are all used, intended to represent racial groups equally. First created on a national scale during the civil rights movement, the backlash it warrants has rarely succeeded at stopping its policies.

These policies have shown to help at face value only. Sure, they increase admissions for certain groups, but they do not help those who are disadvantaged. A study done by Princeton University found that participants were credited or penalized a significant amount of points on the SAT exams purely based on demographics like race. This policy helps no one. Artificially changing a number on an exam fails to increase their actual score. It places people who may be less capable in a position they have trouble succeeding in.

This theory is further supported by the repeal of affirmative action in California State colleges, better known as Proposition 209. Since the Proposition went into effect, the disparity between enrollment and graduation dropped among all racial demographics. Even though overall Black and Latino enrollment declined, those who got accepted were far more likely to graduate, especially on time. Improvement rates for Hispanic students were the highest, with an increase of 23.8% in graduation rate. These facts prove that these artificial favoritism systems are detrimental to graduation rates, prioritizing skin color over the potential to excel. They fail to help those arbitrarily lifted. Why do we keep a system that gives people false hope, only for them to waste their own time and money by dropping out? It is far more detrimental than helpful.

A similar gap was closed between high school graduation rates and college enrollment rates following Proposition 209 passing. In every racial demographic, the discrepancy between those who graduate high school and those who enroll in state college has either stayed roughly the same or decreased, sometimes significantly. It is the closing of these gaps which tell us how unnatural and harmful affirmative action can be. It also tells us how deep these policies cut, as the differences are still in the process of stabilizing over twenty years after Proposition 209 passed.

Affirmative action policies are racially discriminatory and detrimental to individuals of all racial and ethnic groups. To the groups it works against, the discrimination is deliberate. The policies deliberately penalize Asian and White students, taking points away or placing them at a lower priority purely because of their race. That can lead to scenarios where potentially more qualified individuals get denied from a college just for their race. The less visible type of discrimination comes in the disenfranchising of the groups affirmative action targets. The policy perpetuates a division between racial groups. It also perpetuates an unfair sentiment that Black people and Latinos cannot succeed on their own. A policy is patronizing at its core when it suggests people need preferential treatment and coddling to excel.

Affirmative action also incorrectly claims that all minority students are disadvantaged, even those in wealthy school districts and those with celebrity parents. This blanket statement is unfair to these well-off students because of assumptions and stereotypes. It is also unfair to all other students, siphoning attention and resources that could help the disadvantaged. Thus, instead of eliminating and cleansing ourselves of racism and division, we continue to drive it full speed into the 21st century. Even more, it is disguised as helpful or woke, when all it does is perpetuate negative stereotypes and fail to do what it was created to.

Affirmative action is a face value solution, as stated earlier. Designed to produce quick and arbitrary results, affirmative action was less about tackling actual issues at their core and more about getting people to shut up. A Harvard editorial from 1989 states, “The simple answer is that the notion...is an illusion. Affirmative Action is a poor substitute for true equality of opportunity; without it, quotas, set-asides and [welfare] create nothing but false conceptions of preferential treatment.” The issues from thirty years ago ring true to this day. Often cited for the need for affirmative action is the so-called 'cycle of poverty.' This phenomenon seems to work so well at keeping people down, even with all these policies working to fight it. There is one thing all this has in common. You can't raise an individual or group by lowering the bar to get in. The reason poverty gaps have not closed, the reason affirmative action programs only lead to lower graduation rates, and the reason this policy is so ineffective is that it attempts to stop the problem years after it began.

The problems and quoted systemic disparities that these programs try to resolve are rooted far deeper than a boosted SAT score can fix. Income, early life environment, quality, and funding of elementary and high schools are all institutions that fail to provide Americans of all colors with an equal opportunity. The focus should be on fixing these problems at the start. We need to fight for more early life encouragement, better school funding, community connection, and lower crime rates in lower-income areas. That will have a far better effect on low-income children than affirmative action ever will. Low-income environments and lack of educational resources both disproportionally and systemically affect minority students. Solving these problems at the source will help those struggling with unequal opportunity regardless of skin color. That is a must, even if they are students of color more often. These are the kinds of solutions that work, solutions we should be implementing instead of affirmative action.

Affirmative action is, quite possibly, the worst solution to these very pressing issues — perhaps even worse than doing nothing at all. We cannot allow a process to remain that hurts every demographic, including the ones it tries to help. This is a policy that does the exact opposite of what is intended; it perpetuates the stereotypes and divisions that led to its creation. Instead, we need a system that works for all to create an enriching and equal opportunity environment from kindergarten through college. This policy, without change, is detrimental to the future of our students and schools. It has demonstrated this consistently through the past 60 years. This policy is affirmative action, and it goes against the American ideal of equal opportunity.