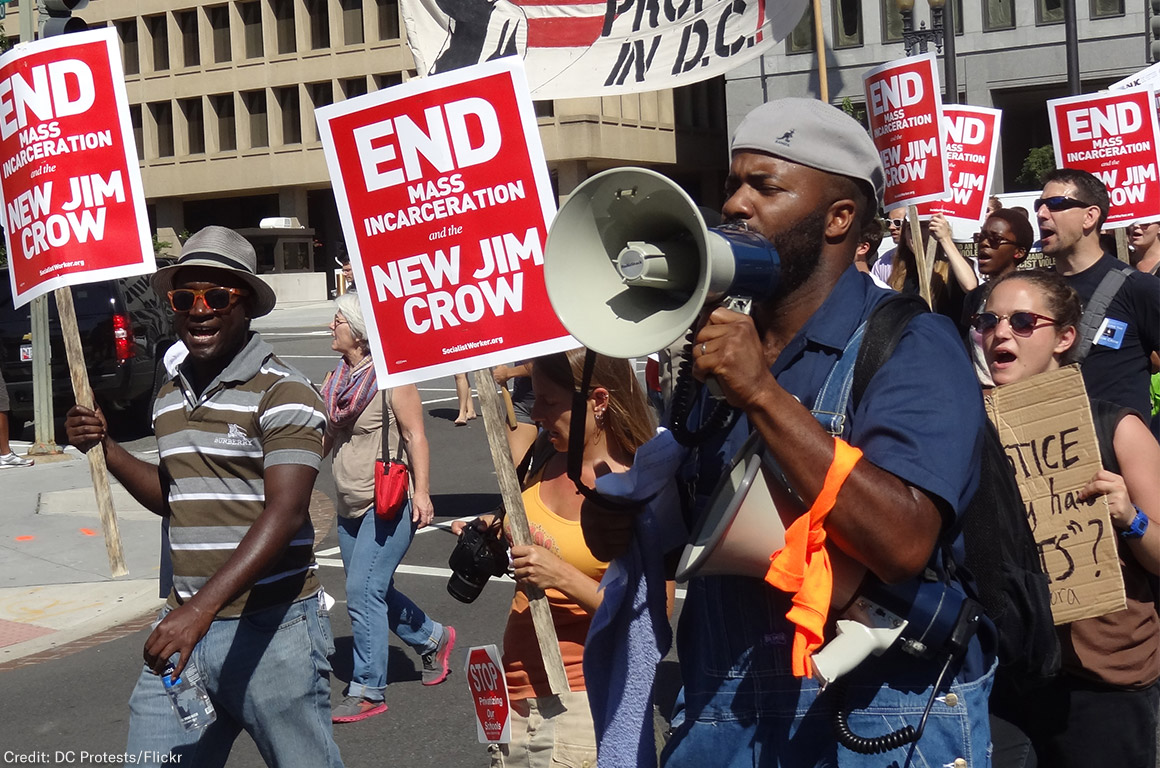 80 percent of those drug arrests were solely for possession.

Three-strikes laws impose a mandatory life sentence, 20 years in prison to life in prison, for people convicted of three violent crimes. Even the models that take account for many criteria like job stability, juvenile criminal records, marital status, and substance abuse have moderate effectiveness in classifying the criminals who are high-rate offenders. Simply looking at a person’s criminal record is not an effective method of determining whether they are a high-volume offender. Studies have shown that people age out of crime. Figure 2 shows the total numbers of criminals and non criminals as time goes on. The proportion of criminal agents declines over time as the proportion of non-criminal agents rises.

As a result, the continuing incarceration of a 55-year-old man suspected of committing armed robberies in his teens and twenties may be counterproductive to public safety. The social interest in retribution, rather than a public safety interest in incapacitating an active criminal, drives the value of imprisoning the 55-year-old geriatric inmate until he dies in prison 20 years later, as well as the difficult-to-quantify deterrent effect that a three-strikes law might have on criminals with one or two convictions today.

These laws and policies make it difficult for people to leave the criminal justice system and leave the life of crime.

Since 1970, America’s prison population has grown by 700 percent. In 1971, President Richard Nixon declared a war on drugs. The most stringent classification of drugs, Schedule One, was temporarily placed on marijuana by Nixon pending evaluation by a commission he created under the chairmanship of Republican Pennsylvania Governor Raymond Shafer. The commission unanimously recommended decriminalizing marijuana distribution and possession for personal use in 1972. Nixon disregarded the study and dismissed its suggestions. Due to a political drug hysteria in the late 1980s, Congress and state legislatures passed harsh punishments that significantly expanded the prison population. Only 2–6% of Americans surveyed in 1985 viewed drug usage as the "number one concern" facing the country. The percentage increased during the rest of the 1980s until it astonishingly reached 64 percent in September 1989, marking one of the most intense fixations of the American public on any issue in polling history. However, when the media lost interest, the number fell to less than 10% in less than a year. But the draconian laws that were implemented during the frenzy persisted and continued to lead to increasing numbers of arrests and incarcerations.

There were two essential pieces of legislation that helped to start the War on Drugs. Those pieces of legislation were the Anti-Drug Abuse Act of 1986, and the Violent Crime Control and Law Enforcement Act of 1994 (1994 Crime Bill). The Anti-Drug Abuse Act of 1986 restored mandatory minimum sentences for possession of drugs. It also gave $230 million, almost 2 billion dollars today, in grant money for states that created similar sentencing policies. The bill funded virtually all drug enforcement activity but did not fund any drug prevention projects. The 1994 Crime Bill created three strikes policies for a third violent felony, permitted the death penalty for many new and existing crimes, allowed juveniles above the age of 13 to be tried as adults for certain crimes, and granted $12.5 billion in grant money to fund the costs of incarceration. Around half of that $12.5 billion was earmarked for states that also adopted truth in sentencing laws, where convicts would have to serve at least 85 percent of their sentences. The War on Drugs started the era of crime control and created the era of mass incarceration.

Mandatory minimums have been opposed by members of all three branches of government. From the legislative branch, Senators Dick Durbin (D-IL) and Mike Lee (R-UT) reintroduced the Smarter Sentencing Act. It would have resulted in federal mandatory minimum penalties for some drug offenses to be reduced, but not eliminated. From the executive branch, President Biden denounced mandatory minimums and former Attorney General Eric Holder also denounced them. Attorney General Merrick Garland stated in his confirmation hearings that “we should … seek the elimination of mandatory minimums.” Representing the judicial branch, former United States Supreme Court Chief Justice William Rehnquist, who was not known for being lenient on crime, opposed them. Chief Justice Rehnquist stated that legislators wanted to “get tough on crime” and did not take careful consideration into the effects that they might have. Lawmakers and public officials from both sides agree that policies like mandatory minimums and three strikes laws are detrimental and that it is time for these laws to be put to an end.

To counter mass incarceration, there have been several policies recommended and brought to legislators. Representative Maxine Waters (D-CA) introduced the Mandatory Minimum Reform Act. This piece of legislation would have repealed all mandatory minimum sentences for all federal drug crimes other than criminal enterprise. Additionally, this bill was not retroactive, so mandatory minimums prior to this legislation were not repealed.

Another proposed policy is the Smarter Sentencing Act of 2021. This policy was proposed by Senator Dick Durbin (D-IL) and would have enacted a narrower reform. This policy would have reduced mandatory minimums for certain non-violent drug crimes and made other reforms retroactive.

A policy that was proposed and is now law is the First Step Act. This policy was introduced by Senator Dan Sullivan (R-AK) and was signed into law by President Trump in 2018. This law made around 2,000 people annually eligible for exemption from mandatory sentences. It also reduced the length of some drug sentences by around five years. Additionally, the First Step Act made the Fair Sentencing Act of 2010 retroactive. These policies have helped with solving the problem of mass incarceration, however, more needs to be done.

With more than 2.3 million individuals currently incarcerated, the number of persons incarcerated in prisons and jails in the United States has more than doubled during the previous 40 years. In the United States, one in 99 adults are incarcerated, and one in 31 adults are subject to some kind of correctional supervision, such as prison, jail, parole, or probation. Prison facilities are overcrowded to the point that prisoners have been triple or quadruple-bunked in cells. Some prisoners have to sleep in gyms or hallways due to the mass overcrowding.

Mass incarceration not only affects the prisoners, but also affects the taxpayers. The criminal justice system costs taxpayers around $260 million a year. Additionally, the federal government provides over $5 billion to state and local governments for criminal justice costs. Estimates suggest that the costs of incarceration provide up to 20 percent of the poverty rate.

If the prison population were a state, it would be the 36th largest state. It would be bigger than Delaware, Vermont, and Wyoming combined. Figure 3 illustrates the total number of people locked up and breaks up the data by prison or jail and by the crime committed.

According to the Equal Justice Initiative, there is an unprecedented level of prison overcrowding and significant strain on state resources as a result of the increase in the jail and prison population from less than 200,000 in 1972 to 2.2 million now. Additionally, prison overcrowding has a harmful effect on the health of the inmates. Poor nutrition, inadequate ventilation, forced inactivity, the effects of violence, trauma, and solitary confinement, as well as the overcrowding and unsanitary conditions inside many correctional facilities, can have long-term detrimental effects on health that violate the constitutional rights of prisoners and detainees.

Mass incarceration has been proven to lead to harmful health effects for prisoners and wasteful use of taxpayer money. The direct causes of mass incarceration, mandatory minimum sentences and three strikes laws, have not had positive effects on recidivism rates. In fact, harsher sentences do not reduce the rates of recidivism.

An additional policy option would be to repeal all mandatory minimum sentences. As previously discussed, it is not necessary to punish geriatric inmates considering the statistics on people aging out of crime. Also, there is little evidence to show that long prison sentences rehabilitate convicts.

Another policy option would be to eliminate prison for lower level crimes. Crimes such as possession of drugs and petty theft should not use prison as a default punishment. Probation could be used as the default punishment instead of prison.  Prison costs are around $31,000 annually per prisoner. Probation is 10 times less expensive than prison. Furthermore, prisons do not decrease recidivism. Studies show that prison sentences increase recidivism. In fact, probation sentences have been proven to reduce recidivism. An option for a policy would be for the U.S. Sentencing Commission to recommend that judges use probation as the default sentence, not incarceration.

A final policy option would be to pass the Reverse Mass Incarceration Act recommended by the Brennan Center for Justice at New York University School of Law. It incorporates four main components: a federal grant program of $20 billion in incentive funds for states over a 10-year period, a requirement that states reduce their prison population by seven percent over a three year period; without increasing crime levels, a practical methodology to determine the amount of money states should receive, and a requirement that states invest their funds in evidence-based practices that reduce crime and incarceration. The $20 billion grant is similar to the grant provided in the 1994 Crime Bill, adjusted for today’s dollar. The seven percent reduction requirement would result in 21 percent less prisoners by the end of the period. This reduction would be significant and would allow the states to use their discretion to meet this goal. The Brennan Center provides examples of reforms that states could make including reclassifying some felonies as misdemeanors, eliminating mandatory minimums, eliminating three strikes laws, and using alternatives to incarceration. An addition that could be added to the Reverse Mass Incarceration Act is that the changes states make should be retroactive. The aforementioned proposed policies could be utilized to fight and end mass incarceration.

All of the previously mentioned policy options should be implemented in all 50 states. The combination of using drug treatment courts, repealing mandatory minimums and three strikes laws, eliminating prison as the default criminal punishment, and passing the Reverse Mass Incarceration Act would benefit everyone in society. The recommended policies would follow the model of restorative justice. Additionally, these policies would put an end to mass incarceration and prison overcrowding.

It is time for the era of mass incarceration to end. The United States incarcerates more people than any country despite having only five percent of the world’s population. The United States criminal laws and sentences should focus on rehabilitation rather than retribution. Adopting these policies would have a drastic impact on ending mass incarceration. The recommended policies would maintain the punitive aspect of the criminal justice system while maintaining its rehabilitative aspect. It is time for the era of Just Deserts to return.

The Institute for Youth in Policy wishes to acknowledge Lucas Yang, Marielle DeVos, Paul Kramer, Sydni Faragalli, and other contributors for developing and maintaining the Programming Department within the Institute.